Former Chief Rabbi of Israel Hints at Location of the Messiah 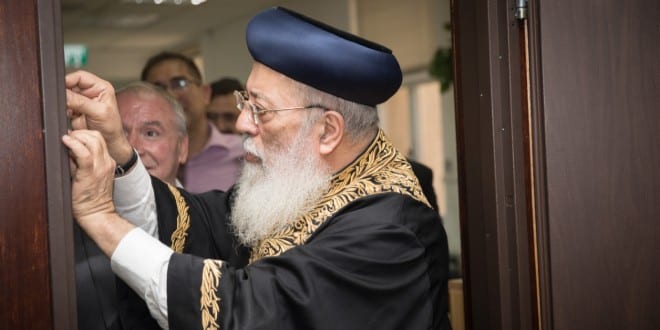 Rabbi Shlomo Amar, the former Sephardic Chief Rabbi of Israel, was the keynote speaker at the ceremony held last Thursday commemorating the 36th anniversary of the death of Rabbi Israel Abuhatzeira in Netivot on Thursday. In Jewish tradition, a yahrtzeit (anniversary of death) is normally a somber event but the death of a tzaddik (righteous Jew) is commemorated specifically through joy and festive celebration.

Rabbi Israel Abuhatzeira, known as the Baba Sali who was the leading Moroccan rabbi until he passed away in 1984. Baba Sali was the scion of a distinguished family of Sephardic Torah scholars and tzadikim (righteous men) who were also known as baalei mofet (miracle workers). The Baba Sali was renowned for his alleged ability to work miracles through his prayers.

Thousands of people participated in the event held on 4th day of the Hebrew month Shevat.

“I want to say things that hurt and hurt me very much,” Rabbi Amar said at the opening of his speech. “And I am sure that not it hurts you as well as most of the people of Israel.”

“We are in terrible shape. Never before have we had elections like this. I am not a political person and I have not spoken about this before, but there will be another election and perhaps even more after that and I see no way out of it. Who knows what God is preparing for us, who knows if the Messiah is not already on the way.”

“I am not saying this just as a personal opinion. Look at what US President Trump is doing, things we have never dreamed of even in our best dreams. And there is more. All the leaders who came [to Israel. This is impossible to ignore. These are things we never dreamed of. How can these things be if not as preparation for the coming of the Messiah?”

The rabbi then spoke about remarks he heard in the name of Rabbi Chaim Kanievsky, a leading authority in mainstream Ultra-Orthodox Judaism and one of the most prominent Torah scholars of this generation.

“This is all just preparation. I have no doubt in this at all. I want to tell you a personal story. A few weeks ago I went to a wedding in Bnei Brak. I was asked to speak a few words of Torah at the wedding. My mashgiach (spiritual advisor) from Tiferet Zion, the yeshiva (Torah learning institution) where I learned, arrived at the wedding. The Hazon Ish (Rabbi Avraham Yeshaya Karelitz) established the yeshiva and I studied there, as did Rabbi Haim Greenman and Rabbi Chaim Kanievsky.”

“I had not seen the mashgiach for fifty-one years and when he came in, I was as excited as if he came from another world. We spoke for about two hours. He is a holy and great man.”

“As he prepared to leave, I accompanied him. He told me that not so long ago, he wanted to go abroad. He went to Rabbi Chaim Kanievsky to inform him that he was traveling. Rabbi Kanievsky was shocked.”

“Rabbi Yitzchak, you are going abroad?” Rabbi Kanievsky asked him. “You don’t know that the Messiah is ‘standing against the wall’ [is about to arrive]?’”

“Rabbi Kanievsky told him to remain in Israel and that is precisely what he did. He stayed.”

Rabbi Kanievsky made headlines four years ago when, after a lifetime of teaching Torah to the masses, he suddenly began announcing in a distinctly uncharacteristic manner that the Messiah’s arrival was imminent. Many of his followers believed the rabbi was speaking in a general manner since Jews are explicitly commanded to anticipate the arrival of the Messiah at any moment. Rabbi Kanievsky continued to make these announcements and it soon became clear to all that he was referring to a specific event that he, in his holiness and wisdom, believed was about to take place.

“All the great rabbis of this generation are saying that the Messiah is about to reveal himself,” Rabbi Amar said at the event. “All the signs the prophets gave, all the signs predicted in the Gemara, the Mishnah, the Midrash, everything is taking place, one by one. All we need is to remain strong for a little bit longer.”

In his remarks, Rabbi Amar emphasized the sanctity of the Sabbath, which he said was the key factor in bringing the Messiah.

Rabbi Baruch Abuhatzeira, the son of the Baba Sali, also spoke. He announced that, for the first time, he was wearing the special garment that his father had set aside to greet the Messiah.

It should be noted that last week, Rabbi Abuhatzeira, a well-know wonder-worker in his own right, announced that the arrival of the Messiah would preempt the initiation of President Trump’s plan for the Middle East.