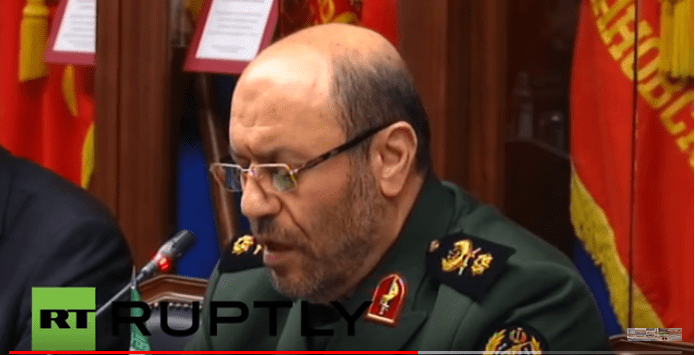 In a speech this week, an Iranian general called on the people of Iran to fast as preparation for standing strong against U.S. sanctions reports Radio Farda. One expert says that this extreme statement was a sure sign that the regime is currently very concerned about the “connection between their heads and their necks.”

Hossein Dehghan,  the former minister of defense of Iran, addressed a conference on Saturday titled “The idea of resistance in Imam’s (Khomeini) school of thought”.

In his speech, he acknowledged that U.S. economic sanctions would have a dire effect on the Iranian economy, but Dehghan suggested that the ensuing austerity could be used as a weapon against Iran’s enemies.

“If America is sanctioning us and wants to keep us hungry, the people should fast to show their resistance,” Dehghan said.

Dr. Mordechai Kedar believes this declaration by Dehghan is a sign that the Iranian regime is on its last legs.

“The rulers are horrified by the situation they are in because of the sanctions. But, unfortunately, because of this pressure, the regime does not hesitate to shoot into masses of protestors. The generals and politicians are fighting for their lives.”

Dr. Kedar explained that the Iranian government would never turn to the Western powers for help.

“This is part of the  Islamic practice of taqiya (dissimulation by silence or omission),” Dr. Kedar said. “They will say or do anything to save face at any cost. If they show weakness in any way, the masses will eat them. They must maintain deterrence vis a vis the masses.”

“The more confidence the Iranian leaders show, the more they are actually horrified at the difficulties they face in dealing with their own people.”

This is not the only call by the Iranian regime for the people to fast in the name of resistance. Last year,  Iran was suffering from a ‘chicken crisis.’ Chicken, the most popular protein in Iran, was in short supply leading to skyrocketing prices. Ahmad Alamolhoda, a cleric appointed by the current Ayatollah, told people in a sermon that if they cannot afford chicken, they must eat a cheap omelet instead.

In June,  Energy Minister Reza Ardakanian said in an interview with the state-run ILNA News Agency that “Iranians eat a lot and dress in extravagance.”

“The reason we were sanctioned was our bad habits in consumption. The (US) realized that our weakness is consumption. We are a consumerist society. Why is China not being sanctioned like this? Because they are satisfied with one meal a day,” he said.

The sanctions are indeed having a powerful effect on the Iranian economy, most notably on Iran’s dwindling middle-class. In June, an article in IFMAT, an Iranian alternative media, cited Hossein Raghfar, an economic affiliated with the regime, as saying that based on 2012 statistics, around 40% of Iran’s population, more than 30 million people live under the “extreme poverty line, also known as “the line of hunger,” set at 1.5 million tomans (120$).

People living under this line are defined as not being able to provide their minimum food needs.

Last winter, Alireza Mahjub, a member of the social commission of Iran’s Majlis announced that there has been a 17-fold increase in slum dwelling on the margins of Iran’s cities.