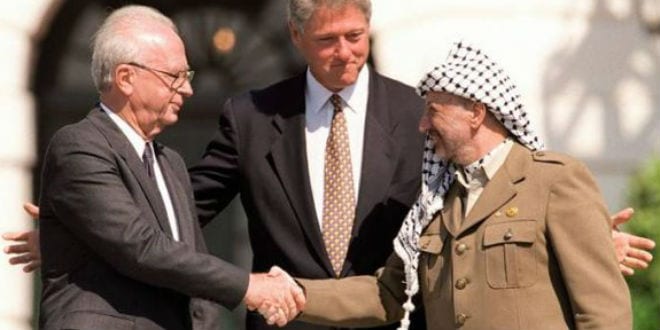 With the presentation of its peace plan, titled, “Peace to Prosperity: A vision to improve the lives of the Palestinian and Israeli people,” the United States has essentially shattered the once-holy Oslo paradigm, having learned from the peace process’s failures and establishes a new path forward to resolving the Israeli-Palestinian conflict.

Since the signing of the Oslo Accords in 1993, Israel and the Palestinians have been locked in a diplomatic holding pattern conditioned on future Israeli withdrawals from territories central to its biblical heritage and vital to its security, while receiving little in return. The Palestinians refused to even recognize that Israel is a Jewish state.

The Oslo process granted the Palestinians administrative and security control of key territory, an education system and media, and trillions of dollars in international funding, all while maintaining that any Israeli presence in Judea and Samaria represented an illegal occupation. All subsequent attempts to advance the peace process were predicated on Israel’s previous offers as the starting point of any new negotiations. The Palestinians understood that there was no downside to rejecting any of Israel’s offers; they could simply push for a better deal down the road.

The proposal currently being advanced by the Trump administration corrects fundamental flaws of past negotiation attempts, specifically because it is predicated on the probability that the Palestinians may ultimately reject it.

Yet the plan allows the Palestinians ample time to “think it over.” It commits Israel not to build on any territories being allocated for a future Palestinian state for the next four years. The clause justifies rolling out the plan just weeks prior to Israel’s upcoming election, and six months before a fateful American national election. (The U.S. administration had hoped to release the plan much earlier and would have if not for Israel’s electoral impasse.)

The four-year moratorium allows just enough time to give U.S. President Donald Trump, if he wins a second term, the opportunity to shift past the current offer should Palestinian rejectionism continue.

At the end of a second term, Trump could justifiably impose additional consequences on the Palestinians should they still choose to reject the generous offer on the table. It is completely possible that Trump—fed up with Palestinians’ stubborn refusal to take an offer deeply rooted in facts on the ground, plus $50 billion in financial incentives—might then back Israeli annexation of much more territory than the plan currently outlines.

That unstated contingency provides backing to Trump’s assertion that “this may be the last opportunity the Palestinians ever get” to declare a state. If the Palestinians reject this offer, they may find that there is no disputed land left for a state in the future.

Also, unlike previous negotiation attempts, the plan also requires the Palestinians to behave like a state before they can declare one. That means they must recognize Israel as a Jewish state; freeze all “pay-to-slay” payments to terrorists and their families; remove all calls to incitement from all educational curricula and state-run media; create fully transparent and corruption-free financial governance mechanisms; and completely disarm terror groups in what must be a fully demilitarized West Bank and Gaza Strip.

The requirements are a tall order for the current pseudo-state whose leaders have been encouraging and financially incentivizing terrorism since before Oslo was signed and who have cultivated an industry of government corruption, repeatedly siphoning off international funding for personal benefit and terror financing.

Nevertheless, failing to fulfill any of the plan’s requirements will essentially invalidate future Palestinian land rights under the proposal. The plan requires that both the United States as well as the State of Israel jointly certify that the requirements have been fulfilled before any Israeli land concessions are made. This joint certification requirement protects against the possibility of a post-Trump administration unilaterally asserting that these conditions have been met.

Most importantly, the plan recognizes that Israel’s security is paramount in—and in fact is the very purpose of—a peace agreement with the Palestinians. This is why both Gaza and the West Bank must be completely demilitarized under the plan, and why Israel will control borders on all sides of the West Bank. Israel’s easternmost border will remain alongside Jordan to protect against the possible future loss of security coordination with the currently pragmatic Hashemite regime.

Thus, should stability in Jordan and its security coordination with Israel break down, the Jewish state will remain protected against the possibility of terror organizations pouring from Jordan into the West Bank, within earshot of major Israeli population centers and Ben-Gurion International Airport.

Even within a future Palestinian state, Israel will have complete “overriding security control” over the entire territory west of the Jordan river, which is a higher degree of control than the Israel Defense Forces currently has in territories designated as Area A by the Oslo Accords. In this way, Israel does not take any security risks should the Palestinians attain statehood under the plan. Furthermore, as part of the deal, Israel and the United States will sign a formal, limited defense pact that classifies a military attack on Israel as an attack on the United States.

The Trump plan recognizes that Israel’s strategic position has improved exponentially since the Oslo Accords were first signed. In the Middle East, the relative strength of each party has always been a key component factored into any negotiation, and Israel can accordingly demand and expect more now than when it entered previous peace attempts.

The plan includes a similar re-calibration fifteen years after Israel’s full withdrawal from the Gaza Strip in 2005—a case study for potential future Israeli withdrawals from Judea and Samaria. Not only did that withdrawal not advance the prospects of peace, it tore into the moral fabric of the Jewish people while turning Gaza into a 2 million-strong Hamas and Palestinian Islamic Jihad terror enclave and a launching pad for thousands of rockets at Israeli population centers.

The plan proposes to solve, or more accurately to end the current conflict based on current realities whereby large populations of both Jews and Arabs live within the disputed territories. For Palestinians, it provides significant improvements to infrastructure, enhances freedom of movement and opens economic opportunities. No other minority population in the region is being offered such a generous package.

For Israel, the plan allows for the nearly 500,000 Jews living in Judea and Samaria to be governed by the same laws as every other Israeli. And in exchange for the considerable tracts of land that Israel gives up, both in the Area C in which it currently controls and along the southern border with Egypt, it gets to live with enhanced security, with the same Palestinian population it lives with now—provided that population is demilitarized, rejects terror and becomes financially transparent.

And should Palestinians reject the current offer, they might find that within a few years, no credible offer will be left. In this one plan, new realities are finally being acknowledged, and the failed Oslo paradigm that has plagued the Israeli-Palestinian conflict for the past 27 years is finally being retired.