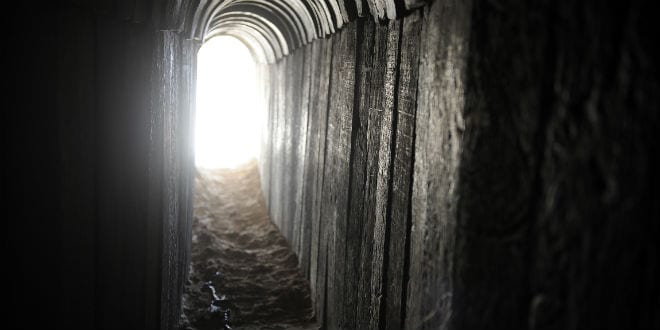 [NEW YORK] “Within the ‘Deal Of The Century’ the Trump Administration’s reported proposal to create a tunnel corridor linking Hamas-run Gaza to the Palestinian Authority-run territories would pose an extreme danger to Israel’s security,” stated Moshe Phillips, Herut North America’s national director. “The creation of a tunnel highway and railway linking the Gaza Strip to those parts of Judea-Samaria that are controlled by the Palestinian Authority would slice across Israel’s middle and would connect and thereby significantly strengthen the potential military capacity of these two perennially hostile anti-Israel regimes.”

Herut North America is a pro-Israel movement that stands for Jewish sovereignty in all the Land of Israel, human rights, and Zionist education.

Herut believes that it should be clear that the tunnel aspect of the Trump team’s “Deal Of The Century” proposal would critically endanger Israeli civilians.

“Hamas is already taking advantage of every current opportunity to send terrorists from Gaza into Judea-Samaria [AKA “the West Bank”], so just imagine what Hamas would do if it is given a highway and railway tunnel system through which it could send whatever it wants,” says Herut’s Phillips. “If Israel tried to interfere with Palestinian Arabs using that corridor, it would become the subject of severe international condemnation. The United Nations would almost surely threaten sanctions as would the European Union. This deal, if implemented as presented, will turn into a nightmare of criticism and pressure, and will effectively tie Israel’s hands in such a way that Islamic terrorists will be able to launch attack after attack at will.”

“If Hamas starts sending camouflaged truckloads of missiles through the tunnel corridor, will American inspectors be on hand to intervene? Would the war-weary American public accept the stationing of U.S. armed forces in such a hostile situation?” asks Moshe Phillips.

This deal would reduce Israel to approximately nine miles wide—virtually indefensible—as it was before the 1967 Six Day War. Specifically, a map released by the White House earlier today seems to show the area under Israeli control near Netanya, north of Tel Aviv as it was before the 1967 war. Israel’s major cities and Ben Gurion Airport would be within easy rocket range of a Palestinian terrorist army—an unprecedented danger should this deal be implemented and Israel allows construction of a transportation tunnel into and out of Gaza to Judea-Samaria.

“The Herut movement calls on all pro-Israel Americans to speak out now against the idea of the tunnel in this deal to your senators and members of congress,” says Phillips.