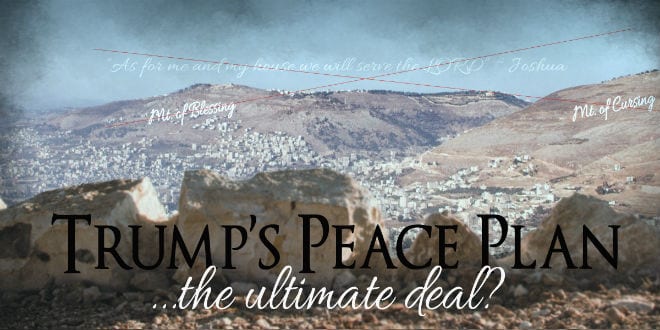 With the release of the Trump Middle East peace plan, the “Deal of the Century,” there have been many questions and challenges posed about whether its good or bad, politically motivated or not, has potential to do anything toward achieving peace or make things worse, and much more. One thing it does do is that it changes the paradigm from the decades old mantra and largely failed policy of two
states along the pre-1967 armistice line (the boundaries following the 1948-49 War of Independence) and makes people look at Israel and the Middle East through a different prism.

Here are ten questions and things to look out for and to ponder as the plan is revealed and the outcome unfolds and pundits and politicians have their input.

1. It seems the Trump plan creates a new paradigm. For those who reject it because the old two state solution is the preferred model, with whom should Israel make peace if there is no Palestinian Arab partner willing to recognize Israel’s legitimacy?

2. If there were a partner with which to pursue peace, which should it be: the PLO (Fatah) or Hamas, competing terror organizations, and if Israel made peace with one would the other honor it, and would there even be peace? What would need to be done to ensure that the other didn’t overthrow the leader of the group that made peace with Israel, and hijack a Palestinian state by establishing a formal terrorist state on Israel’s border?

3. Currently the PLO controls the Arab population centers of West Bank (Judea and Samaria) and Hamas controls Gaza. If Israel made peace with one that didn’t control the other territory, would there need to be two Palestinian states, or basically a three state solution?

4. How does it impact things that there is no real effective legitimate government within the Palestinian Authority with their President Abbas now in the 14 th year of a 4-year term, and afraid to hold elections at risk of losing his tenuous grip on power? Should the Palestinian Authority hold elections as a referendum on what their people want, or is it good enough for authoritarian “leaders” to claim that they represent their people and their will if not interests?

6. For some years broader Arab support for Palestinian Arabs has been more symbolic than strident. How will the Arab states respond to the peace plan, to Israel’s response, to Trump administration? Will their support, or lack of protest, indicate possibly pressuring of the Palestinians, pressure from Trump, or just the idea of waiting things out until the dust settles?

7. Some say that by promoting the plan now, Trump is using this toward his advantage politically. Will the notion of establishing a Palestinian state rebuff Trump’s Evangelical base of support much of which is stridently opposed to dividing any of the Land of Israel not under Jewish sovereignty? If the plan does not take root, or violence follows, would this increase or decrease
Trump’s support going into November?

8. With Israeli elections coming up, how will the political parties play up the acceptance, rejection, or qualifications of the Trump peace proposal, and how will this impact politics to try to sway
votes from one party to another?

9. Some say that releasing the plan now is a gift to Prime Minister Netanyahu who faces his third election in a year. How will the next several weeks of Israel’s election season allow it to take any decisive action? Is it possible that rather than a gift to Netanyahu, the plan is really a way to nudge Israel’s two main left and right of center political parties to form a unity government to work together toward implementation of a peace strategy with a national consensus?

10. Does the nature of the Trump peace plan set a precedent that the US can unilaterally decide on elements of a policies in Israel, and is that a good thing? What will happen when a president is elected who is less friendly toward Israel and decides to do things against Israel’s interests of possible equal proportion?

It’s impossible to predict what will happen broadly as a result of revealing the peace plan, however there are a few things that are intuitive. First, peace will not spontaneously break out. No actual comprehensive peace can be imposed, and it won’t happen overnight. It will take negotiation and an acceptance by Palestinian Arabs and whoever their leaders are, that this is in their interest and that Israel is legitimate.

It is also intuitive that this is or will be yet another occasion for Palestinian and other Arabs to incite violence against Israel. Its possible that things could get ugly, very ugly. Simply the idea that pre-mediated and orchestrated violence is a possibility shows how far we have to go in realizing the possibility that they are (or ever will be) ready to make peace.

Whatever the outcome(s) are, its not going to be boring. Little things that are done, or conversely not done, could be telling. Pay attention and stay tuned.