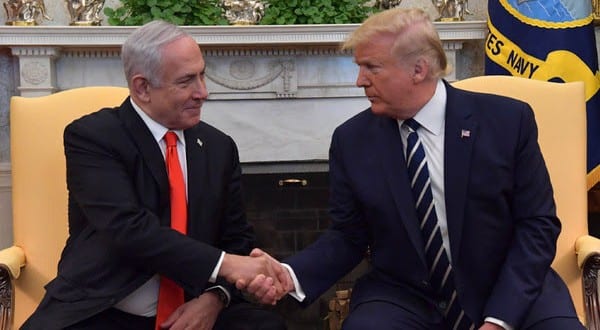 While people on both the Arab and the Israeli side are still considering the possible implications of President Trump’ ‘Deal of the Century’ revealed on Tuesday, one insightful Israeli declared it to be “the declaration of Cyrus in our time.”

Politics, Israel, and Torah are all important to Dr. Rafael Minnes. A former member of the Zehut Political Party, he joined with a group of like-minded Israelis to form the New Liberal Party after Zehut’s leader, Moshe Feiglin, chose a position in Netanyahu’s government rather than run against Likud in the elections. Dr. Minnes served in the IDF Intelligence Corps and the Shin Bet, Israel’s internal security service also known as the Shabak. He is a professor of physics as well.

Dr. Minnes hears echoes of Persian King Cyrus’’ decree that paved the way for the Jews to build the Second Temple almost 2,000 years ago.

“The Trump statement is the declaration of Cyrus of our days,” he wrote on his Facebook page, raising more than a few eyebrows. This provocative statement from such a well-educated source demanded further investigation.

“The first thing that is similar between Trump’s Deal of the Century and King Cyrus’ proclamation is that both of them are non-Jewish political figures who are coming in the name of the God of Israel in order to advance the divine plan incumbent upon the Jewish nation,” Dr. Minnes explained to Breaking Israel News. “This may be the reason why Trump’s deal is uncomfortable for Israelis and Israeli politicians who are certainly not used to this in their political forum. There are very few Israeli politicians who act or speak this way, certainly not secular politicians and not even the religious politicians.”

“I have always called to apply Israeli sovereignty on all the land of Israel, including all Judea and Samari,” Dr. Minnes wrote. “And this has always encountered fierce opposition. We can’t expect the President of the United States to propose an offer that no Israeli government, in fact, no party in the Knesset, has ever proposed.”

“In fact, in his actions until now in the last meeting, the president of the United States has been revealed to be a greater advocate of this than the prime minister of Israel. Trump offered to apply sovereignty to all Judah and Samaria, which Bibi did not even consider.”

“Trump’s deal does not require us to recognize Arab sovereignty in Judea and Samaria. Such recognition will only be required if the leaders of the Arabs accept all the conditions of the deal. And with the conditions that Trump established, there’s no way they’ll accept the terms.”

“To be honest, I have no doubt that Trump actually opposes a Palestinian State, surely more than Bibi. It is clear to me that the purpose of this deal is to strengthen Israeli sovereignty and to bring to the end the revolting idea of a Palestinian state. On this issue, I trust Trump more than Bibi or Naftali Bennett.

Dr. Minnes told Breaking Israel News that just as the declaration of Cyrus was accepted by only a portion of Israel but was a catalyst for the Jews to build the Second Temple, Israel today should take Trump’s deal as the ticket that opens up a greater future for Israel.

“Cyrus did not take upon himself to act for the Jewish people. He did not build the Temple or reinstate the Davidic Dynasty. He merely enabled the Jews to act independently. That is precisely what Trump is doing. He is not giving Israel a gift or forcing something upon us. He is telling us to do what is our right and obligation to do in our own country and he is doing so without any pre-conditions. Trump announced that it is Israel’s right to express our sovereignty in Judea and Samaria.”

“The only thing limiting us until now has been ourselves. And Trump acknowledged that in this deal, stepping aside and telling us to act as an independent nation, something we have failed to do until now, especially regarding Judea and Samaria. It was fitting that we should have done so and would have prevented all the difficulties until now. But we didn’t and now Trump is telling us to act as a nation should. We can only hope that the Israeli government will listen to an outside party.”

“Just as many people do not view Trump’s deal favorably, this was also true when King Cyrus proclaimed that the Jews could return to build the Second Temple. Most of the Jews opposed Cyrus’ decree. They simply did not understand that it was his decree that would bring about the Second Temple. The Jews who supported Cyrus and acted on his decree were the less successful segments of the Jewish community, the poor and powerless with no status in Babylonian society.  This also seems to be the case today, that the Jews who look for their own personal short-term goals which necessitate their staying in exile object to Trump’s politics. But if you look at a larger vision of a future for the Jewish People, Trump’s politics in general and this deal, in particular, are precisely what will take us there.”

“He opened the door for us to do what we need to do. Despite all its shortcomings, Cyrus’ proclamation paved the way for the Second Temple. The same might be said of Trump’s deal. The responsibility is now up to us.”

Dr. Minnes noted that the Knesset is slated to discuss the U.S. proposition next week and a vote will be held to vote on how to relate to it.

This isn’t the first time Trump has been compared to King Cyrus.

This expectation regarding Trump was first expressed by the Sanhedrin after his election when they compared him to the Persian King Cyrus who commanded by God to facilitate the building of the Second Temple specifically because he was influential in global politics.

Thus saith Koresh (Cyrus) king of Paras (Persia): All the kingdoms of the earth hath Hashem, the God of heaven, given me; and He hath charged me to build Him a house in Yerushalayim, which is in Yehuda. Ezra 1:2

Rabbi Yosef Berger, the rabbi of King David’s Tomb on Mount Zion explains: “Like Cyrus, Trump’s connection to the Messiah is that he will play a role in one of the major functions of the Messiah. He will pave the way for building the Third Temple. Trump will not personally merit building the Temple,” he continued. “Like Cyrus, he will pave the way for men who will begin the construction, and when the time is right, the Third Temple will descend from heaven.”

“In the long sweep of Jewish history there have been a handful of proclamations by non-Jewish leaders on behalf of our people in our land: Cyrus the Great, the great Persian King, Lord Balfour, President Harry S. Truman, and President Donald J. Trump.”