What Putin didn’t talk about in Jerusalem …

Home » What Putin didn’t talk about in Jerusalem … 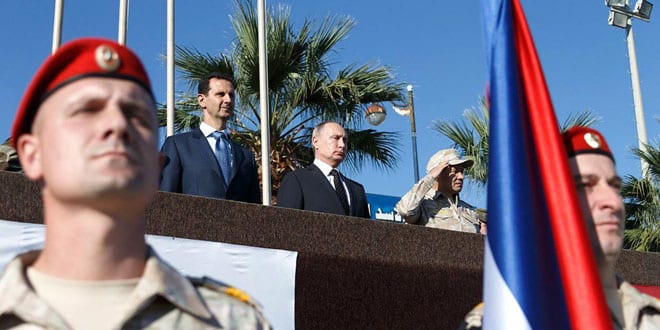 Predictably, Russian President Vladimir Putin’s speech to last week’s World Holocaust Forum in Jerusalem raised hackles among the responsible guardians of Holocaust memory. The Russian dictator claimed that 40 percent of the 6 million Jewish victims of Nazi slaughter were citizens of the Soviet Union—a vastly overinflated figure that can be arrived at only if you include those Jews who resided in countries that were occupied by the USSR.

Putin’s manipulation of Holocaust numbers—historians generally agree that about 1 million of the 6 million Jews murdered were Soviet citizens—comes in the context of an ugly dispute between Russia and Poland over responsibility for World War II, in which Putin has depicted the Poles as willing collaborators of the Germans. In turn, the Poles have countered that the infamous August 1939 Nonaggression Pact agreed between the Nazi Germany and the Soviet Union, which effectively removed Poland from the map of nations by partitioning the country between the two totalitarian states, was the source of the war that engulfed Europe.

According to Jan Grabowski, a respected Polish historian of the wartime period, Putin’s “40 percent” claim proffered in Jerusalem was “completely false.” It’s worth recalling that Professor Grabowski has long been a hate figure for nationalists in Poland because of his own research documenting instances of Polish collaboration with the Nazi occupiers, but that clearly hasn’t pushed him into Moscow’s corner. As Grabowksi and other professional historians understand all too well, all the nations of Europe who found themselves under the Nazi boot collaborated to some degree. The torrid debates of recent years over the “guilt” or “innocence” of Poles, Hungarians, Lithuanians, Ukrainians and others have little to do with the historical record, and everything to do with the desire of nationalist governments to purge their nations of wartime guilt by portraying themselves purely as victims of the Nazis—just as the Jews were.

Putin is absolutely right to remind the world of the enormous sacrifices made by the Soviet Union in the eventual defeat of the Nazis. In the summer of 1943, the Red Army’s counter-offensive in the Donbass region “tore the guts out of the German Army,” as Winston Churchill memorably put it, and was a milestone on the road to victory two years later. Putin is also right to remind the world that Red Army troops liberated Auschwitz, the extermination camp built by the Nazis in occupied Poland, on Jan. 27, 1945. But neither of those facts can forgive his other distortions, nor his willful abuse of the Holocaust to score political points against Russia’s present-day adversaries.

Critically, there is another layer of history that Putin—stalwart defender of the Soviet Union that he is—will never bring himself to talk about publicly.

The Soviet Union was once dubbed a “prison house of nationalities,” and that was especially the case for Soviet Jews. While the Bolshevik Revolution liberated the Jews from the brutally anti-Semitic rule of the Tsar, under communism, Jewish identity was frowned upon, while any expression of support for Jewish national rights or for the Zionist movement was strictly forbidden. At the beginning of World War II, Joseph Stalin’s regime even played down the German atrocities that targeted Jews specifically in the name of waging a “Great Patriotic War.” That only changed towards the end of the war, when Stalin—a true believer in the global Jewish conspiracy—shrewdly figured out that the sympathy of American Jews could be very helpful in Soviet dealings with the Roosevelt administration. And so, a Jewish Anti-Fascist Committee was duly launched, whose figureheads visited the United States, giving dramatic first-person accounts of the war against the Nazis and the sufferings of the Jews.

But by 1946, this same committee had been liquidated, as Stalin resumed an anti-Semitic campaign that ended only with his death seven years later. Even in the era of “De-Stalinization” that followed, the Soviets clung rigidly to their line that the Jewish victims of the Nazis were no different from any other victims, and that highlighting their treatment only served nefarious “Zionist” aims.

In this period, when Soviet Jews faced state discrimination and a ban on emigration to Israel, the Soviets cemented their biggest World War II lie of all. Soviet propaganda claimed that the Zionist movement was an ideological bedfellow of the Nazis, and that Zionist leaders had collaborated with the Nazis at just the time that the USSR was engaged in its heroic resistance. (This particular piece of propaganda was, incidentally, the main reason why Mahmoud Abbas—now head of the Palestinian Authority—was awarded a Ph.D. by Moscow University for a thesis on alleged Nazi-Zionist “collaboration.”)

Discussion of the Holocaust during the Soviet period was licensed only insofar as the focus was on the iniquities of the Zionist movement and its alleged subversion of Soviet efforts to defeat the Germans. Visitors to World War II monuments would look in vain for any acknowledgement of the Holocaust as a Jewish event. Meanwhile, the Soviet press dripped with crude cartoons—reminiscent of Nazi caricatures—that showed Israeli leaders with hooked noses, wearing fascist-style uniforms that substituted the swastika with the Star of David.

As ever, how we interpret history is often directed by the geopolitical winds of the present. The tortured, complex relationship between Nazi Germany and the Soviet Union—two political systems founded upon fear as the primary instrument of rule—shouldn’t be reduced to a few simple talking points. Yet in the murky world of international politics, fragments of truth are assembled in the service of a larger goal. In this case, Putin succeeded in delivering the Soviet version of World War II from the podium of the world’s most respected Holocaust institution.

Sadly, in the years to come, as the Jewish community frets that there are few Holocaust survivors left alive to tell of their experiences, we should expect these Holocaust distortions to become more commonplace.