Messiah’s Gate of Mercy Being Used as Sanctuary for Terrorists 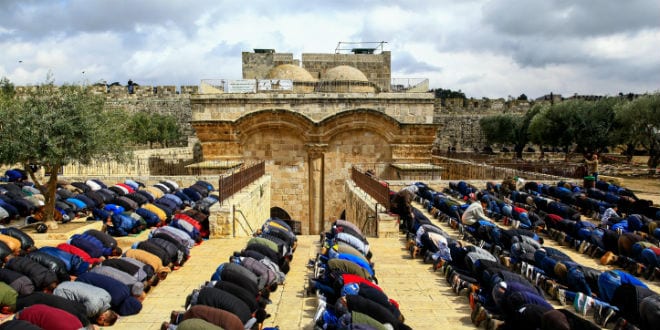 Palestinian media posted a video of Israeli police entering the underground area adjacent to the Gate of Mercy, clearly showing that the area has been modified and now features a stage constructed on the southern wall for ritual purposes.

A post by Paldf, a Palestinian media group, presented a video of Israeli police arresting a young Arab woman inside the underground area adjacent to Shaar Harachamin (gate of mercy), also known as the Golden Gate.

The post was captioned  “The moment that Israeli occupation police stormed the Bab Al-Rahma mosque with shoes to arrest the young woman, Aya Abu Nab, from inside the blessed Al-Aqsa Mosque.”

The short post contained several important elements. The tweet refers to the Bab al Rahma (gate of mercy) mosque. This claim has its roots in an incident last March when a mob of Palestinians forced open a locked gate and took over the area.

The area near the Gate of Mercy was sealed by court order in 2003 when it was discovered that the Islamic heritage association that operated there was associated with Hamas and the site had become a meeting place for suspected terrorists.

When Israel conquered the Temple Mount in the Six-Day War in 1967, the silver-domed Al Aqsa Mosque was the only mosque at the site. Agreements with the Jordanian government based on the Ottoman Status Quo concerning holy sites in Israel established that no changes would be made to these sites. Despite the agreements and assurances of the Jordanian government, the Waqf (Muslim authority) has claimed an additional four “mosques” on the Temple Mount, the Gate of Mercy being the most recent.

It is also interesting to note that the post claims the site is “inside the blessed Al-Aqsa Mosque.” As noted, Al-Aqsa is the silver domed mosque on the southern edge of the Temple Mount. The Temple Mount is named Haram al-Sharif (the holy and noble site) in Arabic. In recent years, Palestinian propaganda has begun to refer to the entire Temple Mount as Al Aqsa as an attempt to erase the Jewish origins of the site and establish Palestinian dominance.

Of course, it is inaccurate to refer to the Israeli police as an “occupation force” since Israel is not “occupying” Jerusalem.

The video clearly shows that a stage has been constructed in the area. The Waqf has ignored many orders by the Jerusalem Magistrate’s Court to close the site and Prime Minister Netanyahu and his security officials have assured the public that the site would not remain a mosque. The Israeli police have also made moves to prevent renovations since the site is archaeologically significant. As in construction done in other locations on the Temple Mount that were illegally turned into Muslim prayer areas, construction is carried out without oversight by archaeologists and with total disregard for any damage to artifacts.

Sharia law requires that Jews and infidels traveling through the Muslim towns must be compelled to take off their shoes and walk barefooted even if is painful.

According to Jewish tradition, the Messiah will arrive via Sha’ar HaRachamim. Out of a mistaken belief that Jewish tradition speaks of the Messiah being from the priestly caste, the Ottomans built a cemetery in front of the gate in order to prevent the Jewish Messiah from arriving.

The video shows the arrest eight days ago of Aya Abu Nab, her brother Hamzeh, and Mohammad Sharifeh.