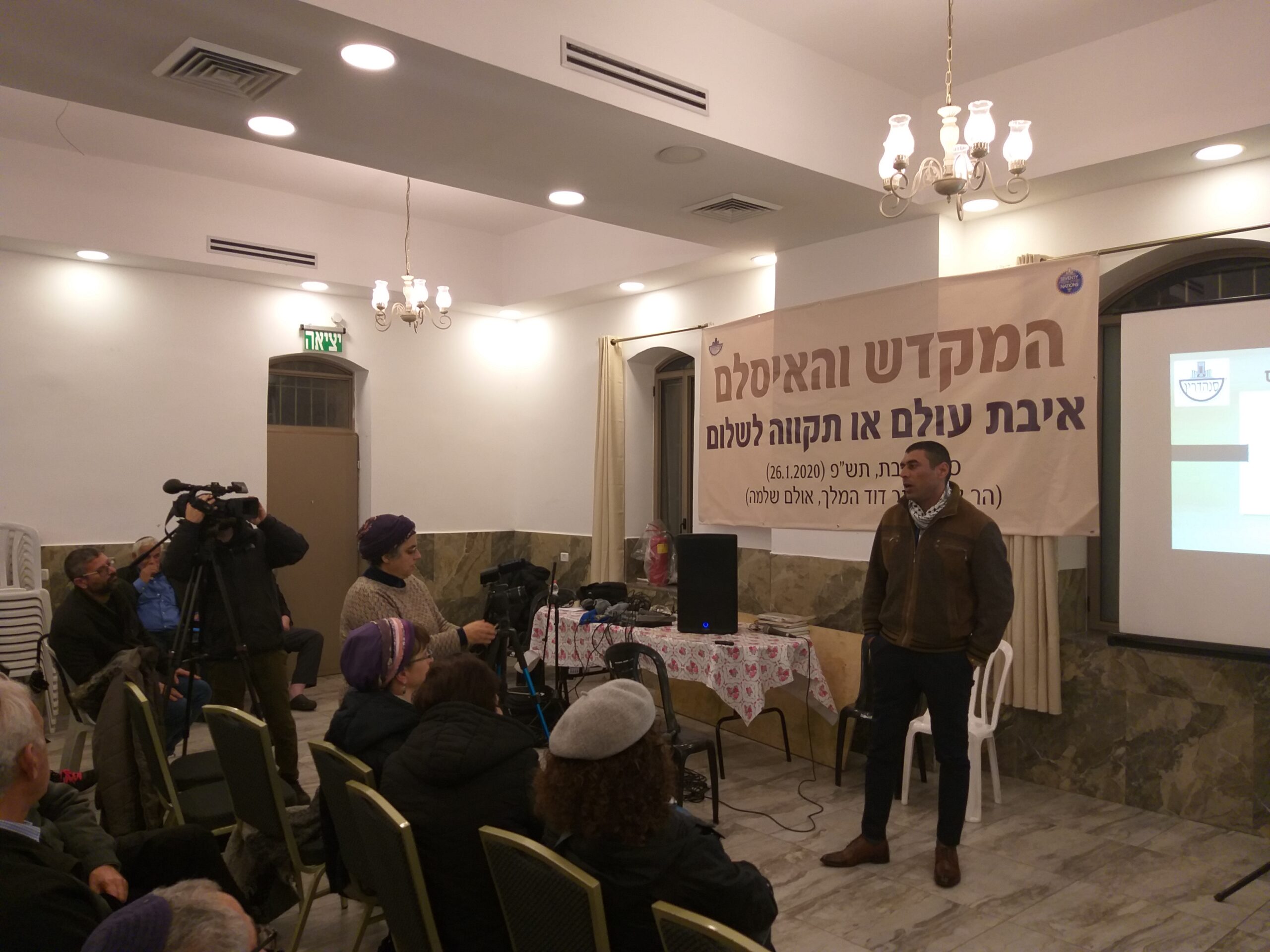 On Sunday night, the Sanhedrin hosted a conference to discuss the role of the Arabs and Muslims in the Third Temple. The conference featured a lecture by Dr. Mordechai Kedar, a senior lecturer in the Department of Arabic at Bar-Ilan University. Dr. Kedar has frequently referred to the claim that Jerusalem is holy to the Muslims as “fake news.”

“Jerusalem is not mentioned in the Quran and there is not a basis to believe that Jerusalem had any significance for Muhammad,” Dr. Kedar explained to Breaking Israel News. “In early Islam, we see that assigning holiness to the Temple Mount was criticized as an attempt to introduce Jewish concepts into Islam.”

“Jerusalem only took on any significance in Islam in the late 8th century when the Bedouin Muslims prevented the Damascus Muslims from making Haj (pilgrimage) to Mecca. As an alternative destination for Haj, the Damascus Muslims decided on Jerusalem, adding a Hadith (oral commentary) shifting the scene of Muhammad’s Night Journey to Jerusalem in order to justify their decision.”

The source of the Muslim holiday of “Isra” (journey) and “Mi’raj” (ascension, literally ‘ladder’) and the entire Muslim claim to Jerusalem as a holy site is based on a story in the Quran. According to the Quran, Muhammad traveled from Saudi Arabia to “Al-Aqsa” (the far mosque).  From there, he ascended to Heaven, returning to Earth the next day. Some Muslims claim Al-Aqsa is the silver domed mosque on the southern end of the Temple Mount compound.

In addition, Dr. Kedar described the rich oral tradition that was built up to bolster the validity of Haj to Jerusalem. Traveling to Jerusalem was touted as a cure for diseases. Prayers at the Temple Mount were purported to have far more impact than anywhere except Mecca. The creation of the world began in Mecca but was continued in Jerusalem, a claim which is surprisingly similar to the Jewish claim that Creation began at the Temple Mount.

“For eight years, Damascus Muslims made Haj to Jerusalem, during which the Dome of the Rock was constructed and the Foundation Stone sacred to Jews became a sacred place to Muslims. This was to create religious competition for the Kaaba (a large stone in Mecca that is the holiest site in Islam),” Dr. Kedar said. “But when they were again permitted to travel to Mecca, Jerusalem was forgotten and even became a garbage dump for construction materials.”

“Shia Islam, mercilessly persecuted by the Umayya Caliphate, did not accept the holy Jerusalem canard, which is the reason the second holiest city to Shiites is Najif in Iraq, the burial place of Shiite founder Ali bin Abi Talib. Many of the Shiite elders – Iranian and Hezbollah – only began to call Jerusalem holy after the Khomeni rebellion in 1979 so as to keep the Sunnis from accusing them of being soft on Zionism.”

“The entire area of the Temple Mount is known as al-Haram al-Sharif – ‘the holy and noble site’- but a change came about after the Six-Day War, when some Jewish leaders began calling for the establishment of a synagogue on the Mount. It was felt that the Muslims would not object, since al Aqsa was on the southern edge of the compound and the synagogue would not be nearby.”

“The Muslims decided to announce that the al Aqsa mentioned in the Koran refers not only to the mosque on the southern end of the compound, but is the name for the entire Temple Mount area, abandoning the original name, al-Haram al-Sharif.”

Rather than use this dubious claim as a battle cry to expel the Muslims, Dr. Kedar suggested that the commonality of Jerusalem could serve as a bond to bring together all three Abrahamic religions: Judaism, Christianity, and Islam. He emphasized that the three religions shared common interests.

“Every year, rabbis and imams join in a petition to prevent a certain parade from taking place in Jerusalem,” he said, noting that al faiths were in agreement when it comes to the sanctity of the city.

Dr. Kedar had hopes that such a coming-together based in Jerusalem could have a global impact but he warned that it had to be of a specific nature.

Rabbi Hillel Weiss, the spokesman for the Sanhedrin, noted the powerful point that Dr. Kedar made.

“There are certain points having to do with Israel, Jerusalem, and the Temple in which it is impossible, actually forbidden, to compromise,” Rabbi Weiss said. “We must begin with the truth and move on from there, even if the truth is uncomfortable. Every nation is different, with a unique history and role to play in the Temple. Each must serve God in their role.”

Massad addressed the crowd on Sunday, emphasizing that he acknowledged everything Dr. Kedar had said. Massad, a devout Muslim, stated that Islam requires universal tolerance and love. This claim was challenged by the Israeli Jews in the audience who noted that few Muslims seem to agree with Massad’s claim.

“This is my Allah [God] and this is what he requires me to believe,” Massad said. “This is my belief, the religion of peace. It doesn’t matter that there are others who explain it differently or that they want to kill me. This is my belief.”

His words took on a deep personal significance as he noted that in his younger days, he was associated with terrorist organizations. He emphasized that if his introspection on Islam had led him to change, this could be true of other Muslims as well.

As in any true meeting of minds, Massad also raised some uncomfortable truths for the Jews.

“It was not the Muslims who destroyed the Temple,” he said. “It was Rome. We do not have to repent for that. They do.”

Massad also put the responsibility for a solution firmly upon the shoulders of the Jews.

“I can only speak for myself but there are many more Mohammad Massads than you can imagine,” he said. “But we are not organized and cannot express our desire to move forward. But the Jews are divided and have many different opinions, some of them quite confused and confusing. It is impossible for the Arabs to understand what the Jews want.”

Massad has paid deeply for his convictions. In June, Massad, a businessman originally from Jenin but a long-time resident of Haifa, was slated to attend a U.S.-led business conference in Bahrain. When Massad discovered that the other Palestinian businessmen at the conference were only attending in order to use the forum to shame Israel, Massad chose not to attend. Massad was censured by his family and many of his friends. The Palestinian Authority posted his photo on social media, endangering his life.

When asked if he was afraid that his actions would bring him harm, Massad smiled.

“I am not afraid,” he told Breaking Israel News. “I am doing what Elohim [Hebrew for ‘God’] tells me to do.”

Rabbi Weiss emphasized that Massad was a powerful and timely voice in the dialogue between nations.

“There are those from the Sons of Ishmael who recognize that the gold Dome of the Rock was built upon the once and future site of the Jewish Temple. It is part of the Muslim tradition. They accept that the prophecy applies to all nations. It must be so for the Temple to be a House of Prayer for all nations.”

Noha Hassid, an Egyptian Muslim nuclear scientist, has been working to bring true peace to the region. She also addressed the conference. Hasid runs the Center for Peace in the Middle East. A devout Muslim, Hasid believes that Arab participation in the Temple is “the only paradigm for peace in the Middle East.”

Her peace initiative is composed of two stages: cultural confrontation, or what she describes as a “Normative thesis”, and final peace talks in light of previous work in which borders and compensations are determined.

“Our initiative for peace works for Muslims,” Hasid said. “I’ve been developing it for 20 years. It is a win-win situation; a win for the Jews and a win for the Arabs.”

Hasid separates the Arabs into four categories regarding peace with Israel:

1- Those who are honest and unafraid and have knowledge of the Koran readioy admit Jewish rights tothe land of Israel.

3- the ones who know the truth but choose to hide it, deny it, or distort it. These are the people who follow “the poison in the honey” plan; ½ truth and facts that are only used to deceive as part of  a false narrative. Most Arab regimes belong in this category.

4- 4th and last group are the generations of Arabs that have been brainwashed by group 3.

Rabbi Weiss also noted that timely aspect of the conference, coming as the ‘Deal of the Century’, President Trump’s proposal for peace between the Palestinians and Israel, is about to be revealed.

“A political solution that involves dividing the divinely ordained borders of Israel is invalid in its very essence,” Rabbi Weiss said. “Even from a political basis, turning to the Palestinian leaders is an error that cannot bring positive results for anyone; not Israel or the Arabs. The Palestinian Authority has prevented their own people from choosing their leaders. There has been a change among the Arab people that is being suppressed. There are leaders that envision a new direction that includes a mutually beneficial coexistence with Israel. Any aid to the Palestinian people should be channeled towards them and not given to Palestinians who sacrifice the future of their people for the goal of continuing conflict.”