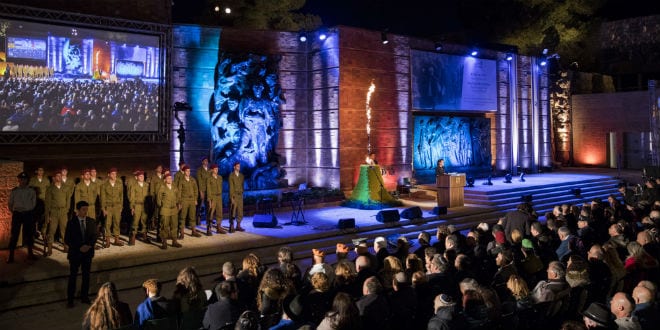 As the nearly 50 heads of state from around the globe began preparing for their arrival in Israel this week to attend the Fifth World Holocaust Forum—on the occasion of the 75th anniversary of the 1945 liberation of the Auschwitz-Birkenau concentration and death camp from the Nazis—the powers-that-be in the Palestinian Authority have been busy trying to figure out how best to channel their anger and envy.

Unfortunately for P.A. head Mahmoud Abbas and his disgruntled Fatah henchmen, however, nobody really cares—least of all U.S. Vice President Mike Pence, who will be representing the White House at the somber Jan. 23 “Remembering the Holocaust: Fighting Anti-Semitism” event hosted by Israeli President Reuven Rivlin and Yad Vashem, the World Holocaust Remembrance Center in Jerusalem.

The significance of the major happening is magnified by the recent spike in worldwide anti-Semitism, even in America, where the rearing of its ugly head in heavily Orthodox neighborhoods has been almost as shocking as its explosion on university campuses.

To the dismay of the aging Abbas, who alternates between denying the Holocaust—as he did in his Ph.D. thesis—and accusing the Jewish state of committing Nazi-like crimes against the Palestinians, very few members of the diverse group of dignitaries gathering in the Israeli capital that he does not recognize will be taking a break in their whirlwind visit to pay their respects, or even lip service, to him.

Bemoaning the above, a regular columnist for the official P.A. daily newspaper, Al-Hayat Al-Jadida, proposed murder as a solution.

As Palestinian Media Watch reported, in an op-ed on Jan. 18, Yahya Rabah wrote, “One shot will disrupt the ceremony and one dead body will cancel [it].”

Rabah reached this par-for-the-course conclusion after attacking the international community for its ostensible hypocrisy in viewing the Holocaust against the Jews as a terrible historical injustice, while allowing Israel to engage in similar behavior towards Palestinians with impunity.

“Of course,” he asserted, “the Palestinians will never accept this equation, and it can be assumed that they will resist the ceremony being held in Jerusalem itself, as Jerusalem is theirs, despite [U.S. President Donald] Trump, who gave it to Israel as part of the filthy deal of the century.”

Rabah failed to mention that if any comparisons are to be made where violence against Jews is concerned, they come from within his own society.

Indeed, Abbas and his cronies have a funny way of showing that they are victims of Israeli intransigence seeking peaceful relations with their Jewish neighbors, particularly when the P.A. insists on continuing its “pay for slay” policy of funding terrorists and their families. You know, as incentive for “martyrdom” in the name of Allah.

It makes perfect sense, then, for the P.A. to be sidelined while important figures from the United States, Canada, Australia, Britain, Russia, France, Germany, Ukraine, Italy, Britain, Romania, Austria, Greece, Cyprus, Albania, Croatia, Georgia, Bulgaria, Sweden, Denmark, Finland, Armenia, the Czech Republic, Hungary, Iceland, Albania and others convene—in Rivlin’s words—“to think about how to pass on Holocaust remembrance to generations who will live in a world without survivors, and what steps we must take to ensure the safety and security of Jews all around the world.”

After all, the Palestinian leadership itself—a key perpetrator of anti-Semitism—is part of the problem.