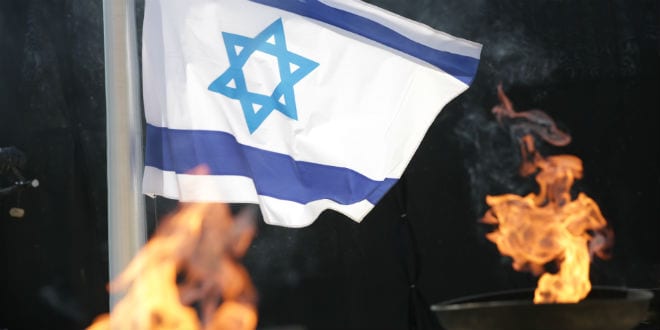 Next Thursday is supposed to mark another diplomatic triumph for Israeli diplomacy. On January 23, the Fifth World Holocaust Forum will convene at Yad Vashem in Jerusalem to mark International Holocaust Remembrance Day and the 75th anniversary of the liberation of Auschwitz death camp. According to Yad Vashem and the World Holocaust Forum, 45 heads of state will travel to Jerusalem for the conference as President Reuven Rivlin’s guests.

But unless something changes in the next few days, the event won’t be a diplomatic triumph. The conference, titled, “Remembering the Holocaust, Fighting Anti-Semitism,” will be mark the end of the golden era of Israeli diplomacy.

This isn’t the fault of the guests. They are an impressive lot. Along with Rivlin and Prime Minister Benjamin Netanyahu, U.S. Vice President Mike Pence, Russian President Vladimir Putin, Prince Charles, French President Emmanuel Macron and German President Frank-Walter Steinmeier are scheduled to deliver remarks at the event.

The problem is with who won’t be at the event. Polish President Andrzej Duda announced last week that he will not be attending. Duda’s decision doesn’t owe to lack of interest. He made no effort to hide how it important he felt it would be to attend the conference. Indeed, as Israel Hayom reported this last week, Duda was so eager to come that he was willing to leave the World Economic Forum early to fly to Jerusalem just for the conference.

And it isn’t that Netanyahu didn’t want him to come. Netanyahu wants very much for Duda to come because Israel has a profound interest in Duda’s attendance.

Were Duda to participate in the event at Yad Vashem conference, his presence would mark the end of the two-year crisis in Polish-Israeli ties. The crisis was precipitated in January 2018 with the Polish parliament’s passage of a law that criminalized criticism of Polish collaboration with the Nazis during the Holocaust. Lawbreakers were subject to up to three years imprisonment.

The law was widely reviled as a bid to rewrite the history of the Holocaust. Its passage provoked a massive outcry in the Jewish world. Israel joined the protests. A crisis in Polish-Israel relations ensued. It took months of delicate and complicated diplomacy led by Netanyahu and his Polish counterpart Prime Minister Mateusz Morawiecki to figure out a way out of the dispute. In June 2018 the Polish parliament amended the law and revoked the possibility of imprisonment for transgressors.

The crisis appeared resolved. Israel and Poland resumed their close bilateral relations, much to both sides’ satisfaction and benefit.

Poland is the most powerful member of the European Union’s Visegrad bloc which includes four formerly Communist central European states – Poland, Hungary, the Czech Republic and Slovakia. The governments of the Visegrad member nations are among Israel’s steadiest allies in the EU.

Led by Poland, the four governments successfully torpedoed several anti-Israel decisions in Brussels. For instance, in May 2018, the Visegrad bloc rejected a draft resolution condemning the U.S. for opening its embassy in Jerusalem. In February 2019, together with the U.S., Poland hosted Netanyahu and Arab leaders at an international security conference in Warsaw that focused on the threat Iran poses to international security.

A week after the conference in Warsaw, the Visegrad bloc was scheduled to convene in Jerusalem – another diplomatic triumph.

But days before the summit was set to begin, following a Supreme Court decision prohibiting Netanyahu from continuing to serve as foreign minister, Netanyahu appointed Israel Katz to serve in his stead. On his first day in his new job, the veteran Minister of Transportation with little diplomatic experience managed to undo all of Netanyahu’s and Morawiecki’s painstaking efforts to resolve the crisis. In one fell swoop, Katz reinstated and deepened it.

Last March, Hungary opened a diplomatic trade office in Jerusalem. Members of the Visgrad bloc have said privately that they are willing to open embassies in Jerusalem. They have also expressed willingness to call for the EU to abandon the nuclear deal with Iran. But no Visegrad bloc members are willing to take such major steps without Poland.

For its part, Poland won’t get in a fight with the Germans, the French and the EU bureaucracy in Brussels for an Israel that it perceives as insulting its national honor.

Following the U.S. targeting of Iran’s terror master Qassem Soleimani two weeks ago, and Iran’s subsequent announcement that it is no longer abiding by the limitations on its nuclear activities dictated by the Joint Comprehensive Plan of Action, (JCPOA), breaking the EU’s unanimity on the JCPOA has become a matter of strategic urgency for Israel.

If Poland, Hungary, the Czech Republic and Slovakia were to announce they support reinstating the UN Security Council sanctions on Iran that were suspended with the implementation of the JCPOA in 2015 through the deal’s so-called “snapback” clause, their announcement at this juncture could have profound implications.

Consider the predicament of British Prime Minister Boris Johnson. As Johnson seeks to conclude a Brexit agreement with Brussels, he doubtlessly feels compelled to continue to align his Iran policy with the EU’s pro-Iran policy. This is would explain why, just two days after the Iranians detained the British ambassador to Tehran, Johnson chose to remain in the deal and join the French and the Germans in calling for the implementation of the JCPOA’s dispute resolution mechanism to deal with Iran’s noncompliance. The EU-3’s move could lead to the reinstitution of UN sanctions at the Security Council. But that doesn’t seem to be the likeliest outcome or the intention. Rather, the EU-3’s initiative appears to be a cynical gambit to buy time and do nothing.

Johnson followed-up on that minimally significant move with a counter-productive one. He called to renegotiate the JCPOA.

If adopted by the Trump administration, Johnson’s call would effectively throw the ayatollahs a life preserver. Today, the Iranian regime is in the grips of an internal power struggle in the post Soleimani era. It is faced with a revolutionary protest movement. And it is in the throes of a deep economic crisis induced by the U.S. sanctions.

Nuclear negotiations are just what the ayatollahs’ doctor ordered. They would be protracted and lead nowhere. As the JCPOA made clear, the Iranian regime will never abandon its nuclear program. The only thing that nuclear talks would produce is pressure on the Trump administration to rescind U.S. sanctions on Iran and so enable the regime to survive the current crisis and continue to build its nuclear arsenal.

In the midst of this EU-3’s current pro-Iran campaign, if the Visegrad bloc were to disavow the JCPOA, pressure would mount on Johnson to align British policy with U.S. policy.

Along these lines, Johnson would feel more compelled to act in accordance with the JCPOA and introduce a resolution at the Security Council to restore the UN sanctions on Iran. If those sanctions are “snapped-back,” (which Iran’s announcement that it is abandoning the JCPOA’s nuclear limitations, should have precipitated automatically), they will strengthen the current dynamic of regime instability, embolden the protesters in the street and discourage commanders in Iran’s armed forces or the Revolutionary Guard Corps from harming them.

This brings us back to Duda and his non-attendance at the Holocaust conference in Jerusalem next week.

For four months Duda asked to be permitted to speak at the conference. Last month those requests turned urgent.

On December 19, in a lecture in Saint Petersburg, Putin harshly attacked pre-war Poland. He accused the Poles of supporting the Nazis on the eve of the war and minimized the significance of the Soviet Union’s collaboration with Nazi Germany during the same period. Putin condemned Polish anti-Semitism in the 1930s, but ignored Soviet anti-Semitism. He failed to mention the 1939 Molotov-Ribbentrop Pact between the Soviet Union and Germany that carved up Poland between the two powers and set the conditions for Germany’s invasion of Poland and the initiation of the genocide of European Jewry.

Israel and the U.S. joined Poland in condemning Putin’s remarks. It was important to Duda to speak at the conference in Jerusalem in order to respond to Putin’s accusations. It was doubly critical for the Poles that Duda be afforded the right to speak because they rightly believe it likely that Putin will use his speech at Yad Vashem to double down on his historical revisionism.

All of Poland’s requests to the conference’s organizers to permit Duda to speak were rejected. Arguing that only the Germans and the allied powers were asked to speak, the organizers failed to take into consideration the damage their refusal would cause to Israel’s bilateral relations with Poland or to Israel’s strategic wider interests.

Earlier this week, Israel Hayom reported that at a meeting Duda held with representatives of Polish Jewish groups, Shevach Weiss, the former Israeli ambassador to Poland, former Speaker of the Knesset and chairman of Yad Vashem blamed the decision to deny Duda’s requests on Moshe Kantor. Kantor is a Russian Jewish businessman and philanthropist and President of the European Jewish Congress. Kantor is also the founder and president of the World Holocaust Foundation.

Weiss said, “The conference was organized by Mr. Kantor and he organized it like a merchant. But you can’t trade in history. You can’t do that.”

Senior officials in Washington involved in the dispute take issue with Weiss’s claim. It’s possible, they say, that Kantor lobbied for Duda to be barred from speaking. But the decision wasn’t Kantor’s to make. President Rivlin chose to deny Duda’s requests.

Rivlin, they charge, denied Duda’s requests not only against Netanyahu’s wishes, but despite the Trump administration’s requests that he be permitted to speak. The administration views both Israel and Poland as key allies and is keen to see an improvement in their bilateral relations. They are hopeful that Rivlin will have a change of heart and belatedly approve Duda’s request.

For the past decade, Netanyahu conducted Israel’s foreign relations almost entirely on his own. Netanyahu knew not to base his actions on populist rallying cries or emotions. Instead, Netanyahu focused on identifying and cultivating common interests with other countries. Owing to his actions, Israel’s diplomatic position is stronger today than it has ever been. Key global powers, and countries worldwide view Israel as a partner and ally because of Netanyahu’s respect for their interests and willingness to work with them. Israel, for its part has only benefited from Netanyahu’s skillful stewardship of its foreign affairs.

Today, there are many nations that wish to work with Israel to advance common goals. Israel’s closest ally – America – believes it has an interest in improved Israeli-Polish relations. But now that Netanyahu is no longer alone in the ring, we are beginning to see what the post-Netanyahu future holds in store for us. Unless Rivlin changes his mind, next week will not be a triumph of Israeli diplomacy. It will be a missed opportunity of strategic proportions.