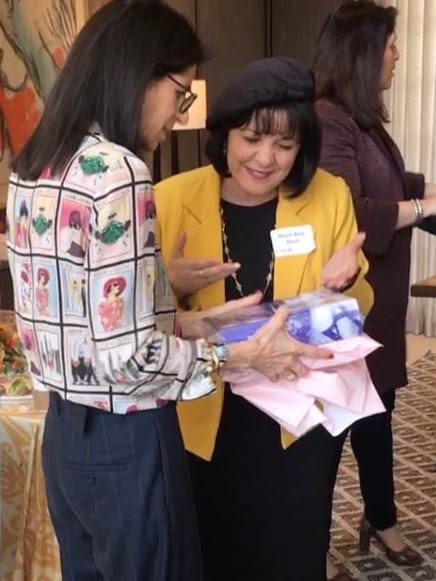 Dr. Aliza Bloch, mayor of Beit Shemesh, has accepted an invitation from the Jewish Community Relations Council of Greater Washington to travel to America’s capital to meet with Jewish and municipal leaders from January 15-18, 2020.

Bloch is meeting with her counterpart in Washington, D.C., Mayor Muriel Bowser on Thursday. She also met with Israeli Ambassador Ron Dermer, the boards of The Jewish Federation of Greater Washington, the Jewish Community Relations Council (JCRC)  of Greater Washington and the Israeli American Council, Israeli professionals at the Religious Action Center of Reform Judaism, representatives of the Jewish Orthodox Feminist Alliance, women lay leaders and students from the Melvin J. Berman Hebrew Academy. Mayor Bloch will be the featured speaker at a JCRC organized community-wide conversation at Beth Sholom Congregation.

Nestled between the Judean Hills and the coastal plains, Beit Shemesh is strategically located in the center of the State of Israel. With a rapidly growing population and diverse demographics, the city has unique economic and educational challenges that Bloch plans to overcome with a recently unveiled city-wide plan.

“I am looking forward to my first official visit to Washington D.C., and renewing relations with the city that has such a rich history and deep relationship with Beit Shemesh,” said Bloch. “I hope to share some of the solutions our city is providing to Israel’s most critical demographic challenges and learn about the issues confronting the Greater Washington Jewish community.”

“The JCRC is honored to host Mayor Bloch and learn about her experience bringing together diverse pockets of her community in Beit Shemesh,” said Ron Halber, Executive Director of the Jewish Community Relations Council of Greater Washington. “We look forward to learning from Mayor Bloch, sharing with her the tremendous achievements of our own inclusive community, and deepening our connections to Israel.”

Mayor Bloch made history as the first female mayor of Beit Shemesh. She unseated the 10-year incumbent ultra-Orthodox mayor in a close race that captured international media attention in November 2018. Beit Shemesh has a large and rapidly growing ultra-Orthodox population, and Dr. Bloch’s victory has been studied by other cities. “The reality is that Israel in 2030 will look like Bet Shemesh in 2020 and our city is providing solutions to Israel’s most critical demographic challenge,” said Bloch.

As the fastest growing city with the youngest population in Israel, all eyes are on Beit Shemesh to see how it can transform to meet the needs of its diverse residents. And although Beit Shemesh has a substantial population of ultra-Orthodox Jews it has created many innovative programs that integrate Haredim into the public school system and workforce under Bloch’s initiative. These municipal led initiatives are creating jobs in Beit Shemesh and greater economic prosperity for all its residents.

With a current population of 132,000, Beit Shemesh is the fastest-growing city in Israel, expecting to double in size by 2025. Under the leadership of Mayor Bloch, who was named one of the world’s 50 most influential Jews by the Jerusalem Post, Beit Shemesh has ambitious plans to address the needs of its growing population. New building projects including a hospital, hotels, archaeological park, and high tech center. Innovative plans to integrate all sectors into the school system and workforce promise to transform Beit Shemesh into a leading Israeli metropolis in the 21st century.

Beit Shemesh has a rich history going back to Biblical times. It is where David fought Goliath and where Samson led the Israelites. Today, it is a hub of archaeological excavations that have recently revealed relics relating to the Ark of the Covenant. Settled primarily by Jews from North African countries in 1950, Beit Shemesh is now the most popular destination for new Olim from North America.

Beit Shemesh voters had crossed party lines to support Aliza Bloch’s hopeful message of unity and progress for the future of their city.

Dr. Bloch previously held various senior positions in the field of education and has received many prestigious awards for excellence in education management. As a married mother of four, the mayor has been named by the “Jerusalem Post” as one of the world’s 50 most influential Jews of 2019.

Following years of religious polarization in Beit Shemesh, Dr. Bloch recognized the urgent need for leadership change. Given her background and experience, she felt she could unite the diverse communities in the city, improve the standard of living for all sectors and create a positive atmosphere so residents could feel proud to call Beit Shemesh their home. After just one year in office, Mayor Bloch has began to create a successful model for local government to enhance mutual respect, religious tolerance and upward economic mobility for all religious sectors in cities throughout the State of Israel.

As a gift to those she met with, Bloch presented The Israel Bible, a Hebrew Bible with an English translation that is themed around the modern state of Israel. The Bible is produced in Beit Shemesh by Israel365.