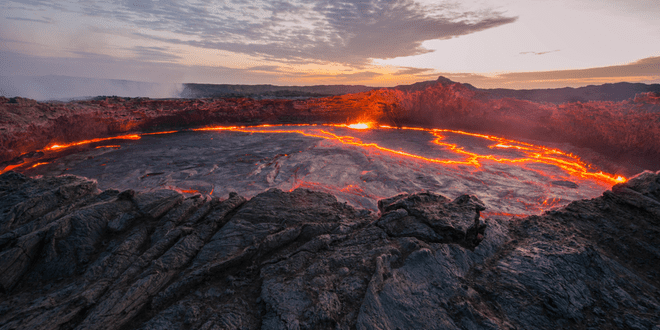 Three volcanoes in three separate parts of the world became active in the last three days, setting off fears that an end-of-days smelting process that will destroy one-third of the world is beginning. Rabbi Nir Ben Artzi, an Israeli mystic with a penchant for prophecy, suggested several causes and solutions for this seismic threat.

On Sunday, Taal Volcano located in the big island of Luzon about 37 miles south of the capital Manila in the Philippines, became active,  emitting a giant plume of ash. Rumbling sounds and tremors were also reported. Authorities fear it is about to experience a hazardous explosive eruption. Ashfalls and volcanic thunderstorms were reported and its status is currently set at alert level 4 out of a possible 5. This means that the volcano showed signs of a possible hazardous and explosive eruption.  Dangers of a possible volcanic tsunami were also feared. All flights from Manila’s national airport were canceled.

Over 450,000 people are estimated to be residing within the 14-kilometer danger zone of the Taal Volcano. Emergency services reported that over 7,700 people are in 38 evacuation centers.

If it erupts again, the ash, which carries microscopic shards of glass hazardous to the lungs, could potentially be carried 60 miles or more, contaminating the air and water supplies in distant locations. More than 25 million people live within 100 kilometers of the volcano.

The volcano has had 34 eruptions in the past 450 years, most recently in 1977, causing loss of life on the island and the populated areas surrounding the lake, with the death toll estimated at around 6,000.

On Saturday, Mt. Shintake erupted on an island in southwestern Japan. Rocks were thrown about 300 meters from the crater but no pyroclastic flow (fast-moving current of hot gas and volcanic matter) was detected. The alert level is currently set at level 3

Shintake erupted in October with the alert level being set at 3.

No evacuation order was issued. About one hundred people are registered as residents on the island, which is nearly 14 square miles in size.

The eruption was so violent that it could be detected from space.

#GOESEast recorded the #eruption of #Mexico‘s #Popocatépetl #volcano this morning (which spewed an #AshCloud ~20,000 feet into the air) via its #GeoColor band. It also detected #SulfurDioxide in the #plume, as shown in the second SO2 composite.
More: https://t.co/UoZmVXRxSq pic.twitter.com/dfpL0PDc7a

Popocatépetl is one of the most active volcanoes in Mexico and the most famous, having had more than 15 major eruptions since the arrival of the Spanish in 1519.

There is no doubt that volcanic activity is on the rise. There were about 25 significant volcano eruptions globally in the first 18 years of this century compared with approximately 65 in the entire 20th century. This increased activity and intensity are magnified due to recent population growth in the affected regions of the Pacific. This point was tragically illustrated in 2004 when a magnitude-9.2 earthquake, the third-largest in recorded history, struck off northern Sumatra, generating a tsunami that killed almost 240,000 people. This point was further emphasized in 2011 when a magnitude-9.0 earthquake hit Northern Japan and the subsequent tsunami killed nearly 16,000 people.

For the last three weeks, Rabbi Nir Ben Artzi, a mystic rabbi in Israel with a large following, has been predicting an increase in natural catastrophes, more specifically increased volcanic activity around the world.

The rabbi also predicted aircraft disasters, such as happened in Iran last week when their military shot down a passenger airliner, killing all 176 people on board.

“Buses and trains will crash and many bridges will fall,” the rabbi warned. “ But this will all take place outside the Land of Israel. All the disasters will be abroad. Nothing in Israel will happen. There will be good rain, rain of blessing in Israel.”

The Rabbi has made several astoundingly accurate predictions in the past.

The rabbi said that all this is to prepare the world for the imminent revelation of the final redemption. In the Bible, volcanoes and seismic activity are connected with God’s anger, especially in the context of the End of Days.

Therefore I will make the heavens to tremble, and the earth shall be shaken out of her place, for the wrath of Hashem of hosts, and for the day of His fierce anger. Isaiah 13:13

Rabbi Ben Artzi explained that volcanoes are explicitly mentioned by the prophets as playing a role in the end of days, preparing the world by burning away impurities as a crucible is used in metallurgy to purify metal. He cited Zechariah as a source for this.

Rabbi Ben Artzi stated that the natural catastrophes are linked to the political situation in Israel.

“All the right-wing should unite,” Rabbi Ben Artzi said. “If they do not all come together, there will be elections for the fourth time. It is a shame; all the money wasted for nothing, just because of pride and stupid ego. A man is alive today and tomorrow he is dead. The left has no chance to succeed because they are driven by pride in the materialistic world.”

The rabbi suggested another home-based solution for these end-of-days seismic catastrophes.

“Parents keep your children away from drugs, gambling, drinking, and assimilation, Rabbi Ben Artzi said. “All the scammers, thieves, bribes, adulterers, deviants and villains will all be revealed before the Messiah arrives.”

He also urged the Jews living outside of Israel to come home now.

“Jews who live abroad can tip the scales and must come to live in the Land of Israel,” Rabbi Ben Artzi said. “Jews living in Israel: do not leave the Holy Land. Such a  gift you have in the land! Keep the boundaries and watch out for East Jerusalem more than anywhere else.”