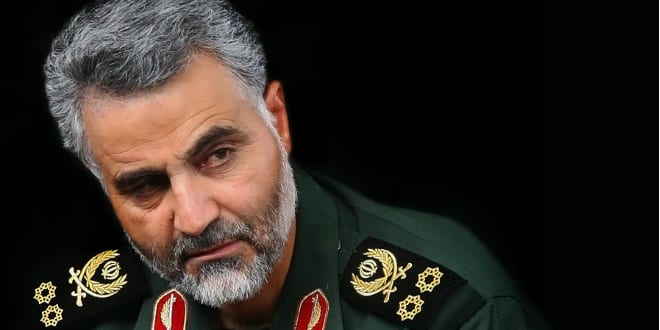 The liberal world is aghast. President Donald Trump has done something that repudiates the very rules of nature by which Western progressives live.

Faced with a military general intent on ramping up the decades-long war of conquest he had been commanding for his fanatically anti-Western regime, Trump liquidated him before he could murder anyone else.

Cue liberal horror and outrage. Maj. Gen. Qassem Soleimani—the man responsible for a vast infrastructure of global slaughter and oppression, and with blood on his hands from American and British soldiers, as well as Iranians, Iraqis, Syrians, Yemenis, Jews and others—was described in The New York Times after being annihilated by an American drone as “universally admired.”

The actress Rose McGowan tweeted imbecilically: “Dear #Iran, The USA has disrespected your country, your flag, your people. 52% of us humbly apologize. We want peace with your nation. We are being held hostage by a terrorist regime. We do not know how to escape. Please do not kill us.”

Howling that Trump had provoked another world war, progressives totally ignored the fact that for the past four decades, Iran had been waging war against the West and Israel and anyone who stood in its way.

Instead, they viewed Soleimani as a murder victim to be mourned while Trump was the war criminal.

Democrats who had hailed the extra-judicial killing of Osama bin Laden in 2011 as a personal triumph for President Barack Obama now claimed absurdly that killing Soleimani was unconstitutional.

If anyone doubted the shocking moral decadence among the West’s liberal elites, this reaction has provided ample evidence. In this upside-down moral universe, genocidal fanatics, whose dissembling enables liberals to take refuge in the fantasy of a trouble-free solution, must be negotiated with and appeased.

They are never condemned for the aggression they conceal, nor is what they do considered a serious threat. The only aggressor said to threaten the peace of the world is the person who stops them in their tracks.

Such moral bankruptcy over Iran has been evident since the Islamic revolutionary regime came to power in 1979, and immediately launched its onslaught on the West and the Jewish people.

Despite Iran’s repeated global atrocities and attacks on American targets, including bombings, hostage-taking and blowing up coalition soldiers in Iraq, successive U.S. presidents from Jimmy Carter onwards flinched from holding the regime to account.

Instead, they indulged in spineless appeasement. This reached its nadir with the Obama-brokered 2015 nuclear deal, which enabled billions of dollars to be funneled into expanding Iran’s aggression while merely delaying its production of nuclear weapons.

Now, with its mealy-mouthed platitudes about de-escalation on both sides, the European Union has reacted to the Soleimani killing in its usual spineless manner.

British Prime Minister Boris Johnson has been making marginally more honest statements about the evils of Iranian aggression. It’s unclear whether he’s anxious not to irritate Trump in view of the post-Brexit trade deal that Britain wants to conclude with the United States, or whether he believes that the U.S. president has now changed the rules of the geopolitical game altogether.

The unfortunate fact is, however, that the British establishment has appeasement encoded into its DNA.

From the BBC and much of the press, you’d think the Iranian people were entirely consumed by grief and anger over Soleimani’s violent demise.

The U.S. media have been hardly any better. On ABC, Martha Raddatz told “Good Morning America” from Iran: “The crowds are massive and emotional … the people are united against America.”

Yet much of this mass mourning was being staged at gunpoint, with shops made to close and people forced to join the funeral demonstrations for Soleimani and the others killed alongside him.

Below the radar, however, Iranians were celebrating. In The Washington Post, Iranian Masih Alinejad wrote: “I have received thousands of messages, voice mails and videos from Iranians in cities such as Shiraz, Isfahan, Tehran and even Ahvaz who are happy about Soleimani’s death.”

This is hardly surprising considering the country-wide demonstrations that have been taking place in Iran for months against this repressive regime, despite thousands of protesters reportedly being jailed or murdered.

Meanwhile, in Iraq, the Persian Gulf, and parts of Syria and Lebanon, people were reported to be dancing in the streets, and handing out sweets and cakes to celebrate.

Informed analysts, such as Hillel Frisch of the Begin-Sadat Center for Strategic Studies at Israel’s Bar-Ilan University, say that Soleimani’s elimination has dealt the Iranian regime an enormous blow.

The intelligence involved in his killing, writes Frisch, proves beyond doubt that the Iranian security system is riddled with informants. This will create a devastating chain of insecurity and suspicion.

In Iraq, he says, many citizens are now sitting on the sidelines waiting to see whether Iran or America will prevail in their country.

This, along with the decision by Shi’ite spiritual leader Ayatollah Ali Sistani not to condemn the killing, reinforces the assumption created by months of hitherto unthinkable Shia Iraqi protests against the Iranian Shia regime that even many Shia Iraqis aren’t mourning Soleimani at all.

It seems as if Trump may have called the regime’s bluff. Its missile attacks on two small American bases in Iraq, which killed no one, was hardly commensurate with the huge game-changer of taking out Soleimani.

Immediately after he was killed, Middle East analyst Jonathan Spyer shrewdly observed that this placed Iran’s rulers in a dilemma. To inflict the kind of harm against America that would reflect the magnitude of Soleimani’s killing would result, they now realized, in Trump inflicting possibly terminal damage on them.

It seems they have decided for now to back off, with a missile attack calibrated to fail, but which allowed the regime to save face with its domestic audience, who were given by state-controlled media the fake news that at least 80 “American terrorists” had been killed.

No one, however, should be under any illusions. The regime can be expected to resume its strategy of mounting deniable attacks against soft or second-tier military targets.

Trump has now laid down his red line: If you attack America, you will be destroyed. The same cannot be said for Britain and Europe. Their aversion to fighting back has turned their populations, with countless Iranian terrorist sleeper cells in their midst, into sitting ducks.

It’s good that Trump is now increasing sanctions against Iran. And good luck to him in piling pressure on Johnson to follow America’s lead and withdraw from the lethal nuclear pact for which the United Kingdom has been such a cheerleader.

But this mercurial and contradictory president now has to follow through. He himself cannot make another deal with a regime that believes its Divine destiny is to cause an apocalypse and bring the Shia messiah to earth. He must instead force its destruction.

“President Trump could not be more clear. On our watch, Iran will not get a nuclear weapon,” said U.S. Secretary of State Mike Pompeo.

All decent, rational people should be cheering those words. For the first time, this evil regime has been held to account. Yet Western liberals are spitting tacks. We can see what side they’re on here, and it’s not their own.

The murderous, fanatical Iranian regime poses one of the greatest dangers to the civilized world. How shameful that Western liberals—in their terrifying moral and intellectual blindness—seem to be falling over themselves to give it victory.