Was Soleimani Found Wearing the Ring of Haman?

Home » Was Soleimani Found Wearing the Ring of Haman? 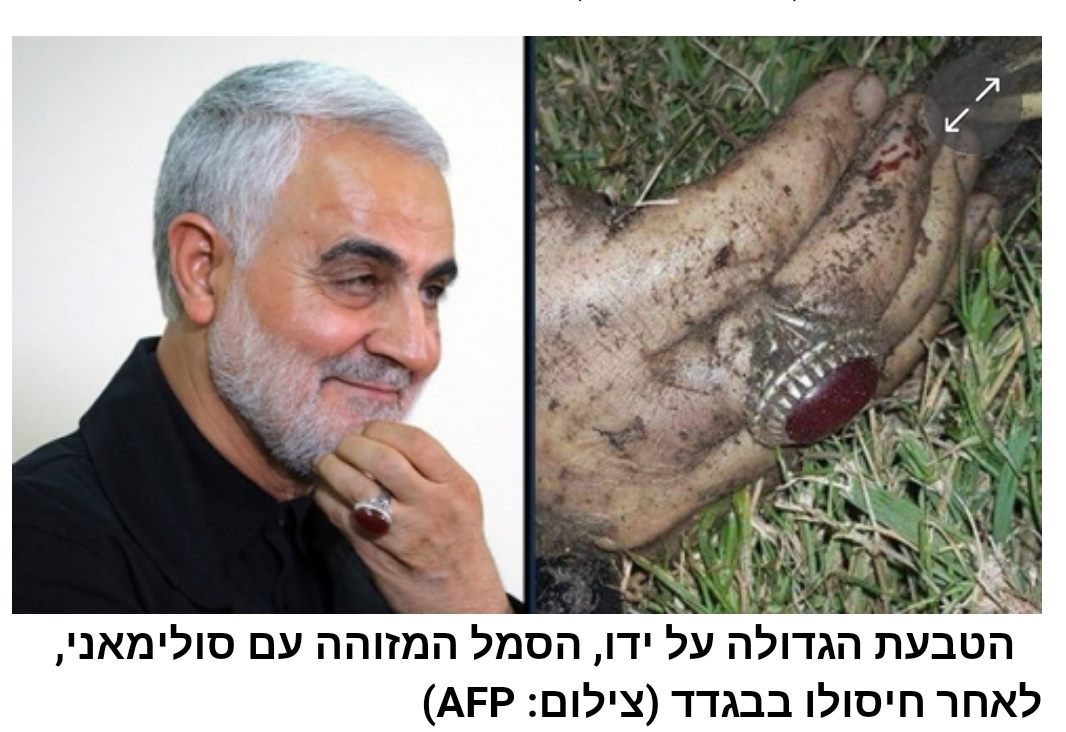 On Friday,  a US MQ9 Reaper drone fired four Hellfire missiles at the vehicle carrying Gen. Qasem Soleimani on Friday, leaving behind a pile of burning scrap metal.

Ten people were killed in the blast and Soleimani was ripped to pieces, leaving little behind to ascertain that the intended target was actually killed. With only scraps of bodies to work with, Soleimani’s death was confirmed by the remains of his arm, still wearing a large red ring he never removed.

The New York Post asked jewelers about the ring.

“From the photo, it looks like it’s a carnelian stone — it’s not a ruby; it comes from Africa,” Maykel Rieth, a professional gem cutter told the Post. “The ring is made out of silver. It could be white gold, but it looks like silver — and whoever made a stone like this is not going to put it in gold because it’s not an expensive piece.”

Islam forbids men from wearing gold rings. Mohammad’s wore a silver ring set with a carnelian stone on his right hand as a commemoration of the removal of idols from the Grand Mosque in Mecca in 630 CE. To this day many Muslims do the same. The red carnelian, called Aqiq, is generally regarded to be the most important gemstone in Islam. Ironically, Ali, Mohammad’s son-in-law, was said to have worn a carnelian to protect himself from enemies and misfortune. Muslim tradition states that the mountains in the world-to-come are formed entirely of Aqiq.

Sod 1820, a Hebrew language website reporting on current events from a Jewish mystical perspective, noted the significance of a ring presented to a prominent Biblical figure: Haman.

Thereupon the king removed his signet ring from his hand and gave it to Haman son of Hammedatha the Agagite, the foe of the Yehudim. Esther 3:10

Haman was, like Soleimani, an evil underling in the Persian Empire, both dedicated to killing Jews. Like Haman’s evil actions resulted in the deaths of his ten sons, ten people were killed in the drone strike that eliminated Soleimani.

The comparison to Haman was noted by Rabbi Shlomo Aviner, head of the Ateret Kohanim Yeshiva in Jerusalem, who was asked if it is permissible to celebrate the death of Soleimani. The rabbi noted the verse in Proverbs advising against such celebrations.

If your enemy falls, do not exult; If he trips, let your heart not rejoice. Proverbs 24:17

“But there are enemies and there are Enemies,” Rabbi Aviner said, referring to a section of the Talmud (Sanhedrin 39b and Megillah 10b) that related how God admonished the angels for joining in the celebrations of the Children of Israel upon seeing their tormentors, the Egyptians, drown in the Red Sea.

“My handiwork has drowned in the sea and you are singing a song?” God said.

“This is correct, and yet the Children of Israel did sing!” Rabbi Aviner noted. “How so? This is because we are not angels.”

Rabbi Aviner cited  As the Admor of Pisetzna, Rabbi Kalman Kalonymus Shapira, known as the Psetzna Rebbe, who wrote Aish Kodesh (holy fire) in the midst of the Warsaw Ghetto uprising during the Holocaust. Rabbi Aviner noted the significant differences that permit humans to celebrate at such times when it is forbidden for angels.

“Was an angel ever hit?” Rabbi Aviner asked. “Was an angel ever murdered? Was an angel ever humiliated? We were! The angels did not suffer as we did in Egypt, so they could not sing. But we did suffer — suffered immensely — and therefore during the Exodus from Egypt, Moshe sang. And Miriam and the women also went out with singing and dancing after the Splitting of the Red Sea and the drowning of the Egyptians.”

Rabbi Aviner noted that it is therefore permitted to celebrate at the demise of Soleimani and other such evil men. The rabbi concluded by citing another verse in Proverbs.

When the wicked perish there are shouts of joy. Proverbs 11:10

“May we be comforted by the building of Jerusalem.”