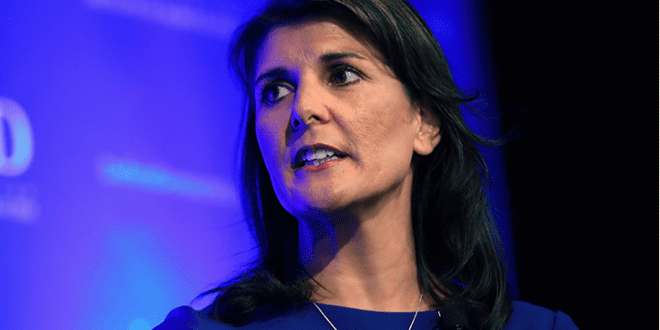 From 2017 to 2019, Nikki Haley served as United States ambassador to the United Nations, an institution that for decades has reeked of corruption, waste, and the decayed dreams of post-World War II idealists.

She was a breath of fresh air—proud of American achievements, unashamed of American power. She spoke forcefully in defense of human rights, and for Israel, the United Nations’ whipping boy. She didn’t apologize. She didn’t get confused. She didn’t curry favor with despots and their high-living mouthpieces on the East Side of Manhattan Island.

The daughter of immigrants, a woman of color whose father wears a turban, she experienced prejudice, and overcame it, in large measure because she understood that’s possible to do in America. In most other lands around the world—not so much.

She was twice elected governor of South Carolina, where she brought people together by focusing on values that unite rather than interests that divide.

In 2016, U.S. President Donald Trump was not the presidential candidate she favored, and at first he didn’t care for her either. After his election, however, it occurred to him that she might make a good secretary of state. With humility, she demurred. But when he proposed she take the ambassadorship at Turtle Bay, she accepted the challenge.

An astonishingly quick learner, she was soon explaining Trump’s policies in public, and advising him in private, which she had the right to do because he had appointed her to his cabinet, a perquisite not granted most U.S. envoys to the United Nations.

She didn’t always agree with him. In July 2018, when he appeared to be cozying up to Russia’s authoritarian president, she said: “We don’t trust Russia. We don’t trust [Russian President Vladimir] Putin. They’re never going to be our friend.”

After Trump tweeted a sarcastic message at Rep. Elijah Cummings, one of the Democrats investigating him, she responded: “This is so unnecessary,” adding a frown emoji.

But she never forgot that it was he who had been elected, not her. In “With All Due Respect,” her recently published memoir, she makes clear that she was put off by those who blurred such distinctions.

For this loyalty and defense of constitutional principle, she has been harshly criticized, and not just from the left. Michael Gerson, a former top aide to President George W. Bush, recently admonished her in a Washington Post column for having “publicly turned against other officials in the administration who saw the president as a dangerous fool.”

He was referring to Rex Tillerson, Trump’s first secretary of state, and John Kelly, his second chief of staff. In her book, Haley recounts them telling her “that when they resisted the president, they weren’t being insubordinate, they were trying to save the country.”

She believed it was their duty instead to tell the president when they disagreed with him, and resign if they could not, in good conscience, assist him. “But to undermine a president,” she writes, “is really a very dangerous thing.”

Gerson assumes she’s insincere and has ulterior motives. She must be “convinced that Trumpism is here to stay,” he concludes, adding that she was “signaling to Trump Republicans that she was not part of the ‘deep state,’ thus clearing away a barrier to ambition.” A politician with ambition? I’m shocked.

As to whether Trumpism is here to stay, let’s ponder that for a moment. I agree that the 45th president’s personality leaves much to be desired. The road connecting his brain to his tongue lacks speed bumps. The process by which he arrives at policy decisions is perilously chaotic.

But these are questions of style more than substance, and surely the latter trumps (for want of a better word) the former. I don’t support all Trump’s policies. But from which of those implemented over the past three years should the country have been saved?

He has improved the economy, not least for those at the bottom of the ladder. We now have two new Supreme Court justices and scores of judges intent on protecting unalienable rights and defending the original meaning of the Constitution.

The United States is no longer sending cash to Iran’s jihadi rulers in exchange for their unverifiable promise to develop nuclear weapons more slowly. The Supreme Leader now has less money to spend on imperialism and terrorism.

Trump recognized that the People’s Republic of China views America with predatory eyes, and that a few more years of “strategic patience” will not ameliorate the menace posed by North Korea.

His insistence that our European allies begin making meaningful contributions to the collective defense has been impolite but effective. He’s been singularly supportive of Israel’s right to exist and defend itself, and he’s taken action against rising anti-Semitism on campus.

In sum, though Trump’s policy-making resembles sausage-making, the product tastes better than anything his predecessor cooked up. And all this came about while he was facing not a loyal opposition but a “resistance” whose single-minded goal has been to frog-march him out of the White House.

I understand why subscribers to The Nation—headlines in the current issue include “Socialism Is on the Agenda” and “The Trump Presidency Is Our Second 9/11″—would disdain Haley, and hope she doesn’t run for president in four years. But it puzzles me why others—Republicans and moderate Democrats—wouldn’t welcome the marriage of her eloquence and elegance with what one might call a neo-Trumpian commitment to making America economically and militarily greater. Isn’t that a necessary precondition for everything else patriotic Americans want to achieve?