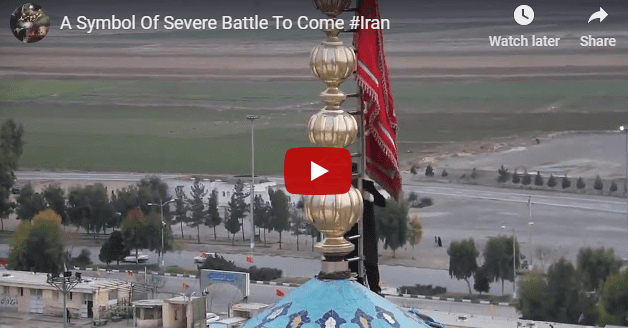 A chilling sight appeared on Sunday as a red flag, symbolizing a call for vengeance, appeared over the Holy Dome Jamkarān Mosque in Qom, Iran. The call has end-of-days significance as the mosque is dedicated to the “Final Imam” the Shiite Muslims believe is the Mahdi, the messianic figure that will appear alongside Isa, the Muslim Jesus, killing all the infidels in order to prepare the world for the ultimate arrival of the Messiah.

The red flag, raised in response to a U.S. drone strike at Baghdad International Airport that killed Iranian Gen. Qassim Soleimani, read: “Those who want to avenge the blood of Husayn.”

In Shia Muslim traditions, flags are a significant part of the mourning rituals. Red flags in Shiite tradition symbolize blood spilled unjustly and serve as a call to avenge a person who was slain. The flag was hoisted above the important Jamkaran Mosque which is on the outskirts of the holy city of Qom, about 100 miles south of Tehran

Dr. Mordechai Kedar, a senior lecturer in the Department of Arabic at Bar-Ilan University, emphasized that the symbol could not be overestimated.

“The red flag means they are going to sink their enemies in a sea of blood,” Dr. Kedar explained explaining how this relates to ‘Husayn.’

Husayn Ibn Ali was the son of the fourth caliph and the grandson of Muhammad. Ali was regarded as the rightful immediate successor to Muhammad as an Imam by Shia Muslims. Hussein was massacred with his family and followers in the Battle of Karbala in 680 CE. Husayn’s death is commemorated every year on the Muslim holiday of Ashura, which for Shia Muslims is a day of mourning but Sunni Muslims recognize it as a festive day commemorating a victory. Shiites recognize this day with acts of self-flagellation using a chain with blades or swords.

“This is a call for vengeance focusing on the Sunni and Umayyads who killed Huseyn and decapitated him, humiliating the Shia,” Dr. Kedar said. “But this is a message to all the enemies of the Shiite. Husayn is the symbol of all the oppressed Shia for all time.”

“This red flag is a call for the deaths of anyone who opposes Shiite Islam, equating anyone today with the killers of Husayn in 680 CE. This is a global call to all of Shia for what they see as an eternal and neverending conflict.”

“The Shia think of this conflict in terms of eternity. There is a verse in the Koran that says that Allah is with those who have patience. Shiite Muslims have a lot of patience. They waited for thirteen centuries until they finally rose up in 1979 in the Iranian Revolution.”

“To say that what happened last week is huge is an understatement,” Dr. Kedar said. “You can compare it to the assassination of Osama Bin Laden and Baghdadi together and it still would not come close.”

This call for massive bloodshed was echoed by Esmail Ghaani who took over for Soleimanias the head of the Iranian Revolutionary Guards’ foreign operations arm.

“Be patient, and you will see the bodies of Americans all over the Middle East,” Ghaani said in a statement upon his appointment.

The site of the Jamkarān Mosque has been considered holy to Muslims since at least 984 CE as a monument dedicated to Hujjat Allah ibn al-Hasan al-Mahdi, also known as Imam al-Mahdi. Born in 869 CE, he disappeared in 948 CE. Referred to in Shia as the “Final Imam”, they believe he will return as the last of the Twelve Imams. He will be the Mahdi, the messianic figure that will appear alongside Isa, the Muslim Jesus, killing all the infidels in order to establish Muslim rule and prepare the world for the ultimate arrival of the Messiah.

One of the first acts of the government of President Mahmoud Ahmadinejad in 2005 was to donate £10 million to the mosque, turning it from a modest mosque into a massive religious complex.