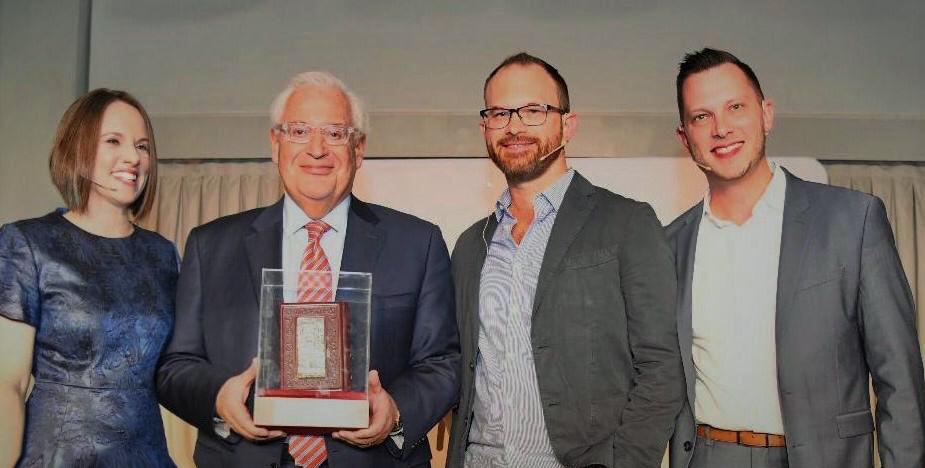 Hundreds of people gathered in Jerusalem, including 500 Christian college students from the United States, to celebrate the anniversary of the founding of the Passages organization as they begin their 5th year. These 500 students represent just a small portion of what in 2020 will be 10,000 students that have traveled to Israel for this life-changing spiritual educational journey. The event was also attended by US Ambassador to Israel, David Friedman, formerly both Member of Knesset and Israeli Ambassador to the United States, Michael Oren, the founders of Passages, Rivka Kidron and Robert Nicholson, and the Executive Director of Passages, Scott Phillips.

For the students, the event was a climactic moment during their first-ever visit to Israel. Throughout the nine-day trip, students discover the deep roots of Christianity in the place where that ancient faith was born, bringing the Bible tangibly to life. Passages was founded in light of a recent and ongoing phenomenon in which young Americans born into Christian families have been moving away from their faith. According to a most recent study by the Pew Research Center, only 65% of American adults define themselves as practicing Christians, a decrease of 12 percentage points over the past decade.

The trip also connects students to modern Israel, showcasing a vibrant, modern nation. Students return equipped to build bridges of understanding and friendship with Israel, the diverse people who live there, and the Jewish community back home.

One student with an interesting story was Darion Ouliguian, a 22 UCLA senior. Ouliguian is not only Christian, but the first non-Jewish president of  Bruins for Israel, a pro-Israel organization on campus traditionally run by Jewish students. The Las Vegas native is also a descendant of survivors of the Armenian Genocide giving him a strong connection to the Middle East and a deeper understanding of the plight of the Jewish people in that region.

Co founder Robert Nicholson and executive director Scott Phillips explained the importance of bringing Christian students to Israel as an eye-opening experience noting that many of the participants never even realized that Jews don’t believe in Jesus. They also added that many have never even met a Jew before arriving in the Holy Land.

Addressing the students, US Ambassador to Israel David Friedman said: “At a time when many academic institutions can no longer be trusted to provide an honest and objective perspective on Israel, it is more important than ever that young student leaders have the opportunity to see the true picture for themselves. Congratulations to Passages for convening such a large and impressive collection of Christian students from around the United States.”

The idea of America is insuperable of the idea of a recreating Jewish State, in this country in this land of Israel. We have a shared history and shared values. The fact that you are here is proof of 2000 years of belief of faith and tradition of those values. “

Founded in 2016, Passages is expected to bring 10,000 students to Israel by the end of 2020. Rivka Kidron is the co-founder of Passages and a member of its Board of Directors. The idea of Passages started during her days as Advisor for Diaspora and Christian Affairs to Prime Minister Netanyahu, where she managed key relationships with global Jewish and Christian leaders.

Leveraging her expertise and connections with Israel’s top political and business leadership, Rivka also runs a firm that creates exclusive content-driven Israel travel programs for various leadership groups from around the world. Robert Nicholson is executive director of the Philos Project, an organization that strives to promote Christian engagement with the Middle East and its cultures. His work largely focuses on spreading the vision of a multi-ethnic and multi-religious Middle East based on freedom of rule and law.

At the event, both Kidron and Nicholson made remarks:

Rivka: In 2016 Passages was born. To give (our students),  the religious, business, social and political leaders of tomorrow – an opportunity to ignite their faith; connect with the values that the U.S. shares with Israel; and strengthen their leadership journey.

Since starting Passages, thousands of students have come home from Israel with a renewed passion and purpose.

Robert: Never in history has there been a time like this, when Christians and Jews can gather around shared values — values that come from the Bible, a book we both share — to make the world a better place. Passages gives us the opportunity to create a legacy for ourselves, our communities, and future generations.