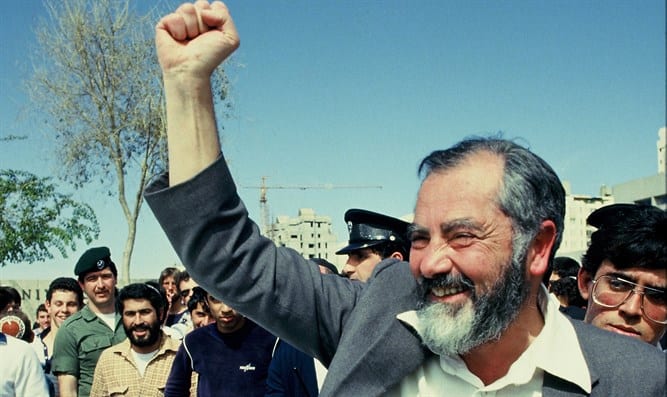 The recent attack in a synagogue in Monsey was only one of many that targeted Jews. One glaring element of these attacks is that they were carried out by people of color, a fact that has been obfuscated by media and politicians. 50 years ago, one rabbi, rejected by the mainstream and labeled a “terrorist”, dealt with anti-semitism in the most direct ways possible, pointing the finger at the black community while predicting that this plague of race-based anti-Semitism would return.

THE MONSEY ATTACK AND ITS PERPETRATOR

Last Saturday night at 9:55 PM, a man entered a synagogue full of approximately 50 Jews in Monsey, New York, drew a machete, and viciously attacked Jews as they celebrated the holiday of Hanukkah. The assailant managed to wound five people while others threw furniture and tried to defend themselves. He fled but a bystander noted his license plates.  Michael Grafton was stopped by police two hours latter in upper Manhattan. He had poured bleach on himself to hide evidence of his crime but blood remained on his clothes and the bloody machete was still in the car. The next day, Grafton pleaded ‘not guilty’ to five counts of attempted murder and was held on $5 million bail.

New York Governor Andrew Cuomo, speaking from outside the Rabbi’s home on Sunday morning, called the attack an act of domestic terrorism.

Ivanka Trump, the president’s Jewish daughter, put a name to the horror: anti-Semitism.

The vicious attack of a rabbi in Monsey, NY last night was an act of pure evil.

As we pray for the victims, may the candles of Chanukah burn bright through this darkness.

She minced no words, raising the alarm that Jew-hatred was burning strong.

People tried to get a grasp on the problem. It seems clear that Mayor Bill de Blasio seriously missed the mark in June when he addressed the issue of a 90% rise in anti-Semitic incidents.

“I think the ideological movement that is anti-Semitic is the right-wing movement,” de Blasio said, denying the anti-Semitic nature of the Boycott Divestment Sanctions movement supported by many Democratic politicians.

Some denied that the attack was motivated by anti-Semitism. Rev. Wendy Paige of the Hudson Highlands Cooperative Parish, who described herself as Thomas’ longtime pastor and said she was speaking on behalf of his family, told reporters that the attack was an act of certifiable insanity, not terrorism. She described Grafton as “not a violent person,” blaming his actions on society.

“Grafton is not a terrorist, he is a man who has mental illness in America and the systems that be have not served him well,” Paige said.

“I have been his pastor for a long time and I have seen him, he is not a violent person, he is a confused person.”

Paige suggested the solution was to fix the institutions.

“We apologize because we know this was not him, this was an action out of mental illness, please understand,” Paige said. “Please Let’s work on our systems for mental illness. Grafton has mental illness and that is the sound of his confusion and these actions.”

The Jewish community of Monsey responded by celebrating the holiday with renewed devotion. A video posted on Twitter by the Orthodox Jewish Public Affairs Council in Rockland County (OJPAC) on Saturday showed the rabbi and his followers gathered in the synagogue next door to his home, continuing the celebration that had been interrupted by the machete attack.

Others had a different reaction. The same community of religious Jews celebrated the arrival of a new Torah scroll, normally a festive public event accompanied by dancing in the streets. Vos Iz Neias?, an online news site that caters to the Orthodox Jewish and Hasidic communities New York, reported that several members of the community stood guard, armed with assault rifles.

The Guardian Angels, an unarmed anti-crime civilians group founded in the late ‘70s, announced on Sunday that they would begin patrolling Jewish areas of Brooklyn.

But there is a truth that is as inconvenient and uncomfortable for everyone as it is glaringly evident. The Monsey attacker was black, as were the assailants who killed three in the Jersey City shooting last month. At least nine attacks targeting Jews in New York City were reported during the eight-day festival of Hannukah and though the media neglected to specify the race of the assailants, security videos from several of the attacks showed that the victims were identifiably Jewish and the attackers were black.

This was reported by journalist Laura Adkins who cited data showing that of 69 anti-Jewish crimes in New York City 2018, forty of the perpetrators were labeled “white” and 25 were labeled “black,” while the others were categorized as Hispanic or Asian.

RABBI MEIR KAHANE AND THE JDL

This racial phenomenon was predicted by Rabbi Meir Kahane, the founder of the Jewish Defense League. Rabbi Kahane founded the JDL in 1968to “protect Jews from antisemitism by whatever means necessary.”  Rabbi Kahane was recognized as a brilliant Torah scholar and based his ideology on the Bible. Locally, the JDL organized neighborhood watch groups and patrols. The JDL advocated for oppressed Jews around the world including the former Soviet Union and Ethiopia.

The group was also powerfully Zionist, calling for immediate Jewish mass migration to Israel to avoid a potential “Holocaust” in the United States, supporting the restriction of Israel’s democracy to its Jewish citizens, and endorsing the annexation of the West Bank and Gaza.

In 1971, he co-founded the Israeli political party Kach (“Thus”) and in 1984 became a Member of Knesset. In 1988, after polls showed Kach gaining popularity, the Israeli government banned Kach for being “racist” and “anti-democratic” under the terms of a law that it had just passed.

The group’s methods were admittedly extreme, violent with sometimes lethal results. For this reason, the JDL was classified as a “right-wing terrorist group” by the FBI in 2001 and is considered a radical organization by the Southern Poverty Law Center.

In 1990, Rabbi Kahane was shot to death by an Egyptian-U.S. citizen.

In what may be seen as a touch of prescience (or perhaps even prophecy), Meir Kahane seemed to predict the current situation.  The first ad for the JDL appeared in The Jewish Press 50 years ago under the headline, “Anti-semitic Black racists are battling for control of cities.”

Ben Yaakov’s assessment is accurate. The JDL favored civil rights for blacks but opposed black anti-Semites and racism of any form. In 1971, the JDL formed an alliance with the National Economic Growth and Reconstruction Organization (NEGRO), a black rights group.

Ben Yaakov had a personal connection with Rabbi Kahane and absorbed his philosophy.

“Rabbi Kahane predicted that these Biblical precepts would also apply to America and that the time for the Jews in the U.S. was quickly coming to an end.”

“The ultimate solution is to liquidate the exile before the exile liquidates the Jews,” Ben Yaakov said. “But the Jews that remain outside of Israel need to arm themselves legally. This would surely have ended the incident in Monsey differently and sent the message that Jews are not easy prey.”

Ben Yaakov noted that his organization, the Israel Dog Unit, has already been approached with inquiries about shipping trained dogs to the U.S. to protect communities, a mission they stand ready to carry out.

Shmuel Sackett, co-founder of the Zehut political party, became a member of the JDL in New York in the mid-‘70s, as did his wife.

“Rabbi Kahane was clearly correct on many levels,” Sackett told Breaking Israel News. “He was, is, and will always be my rabbi, my teacher, my mentor. I very  am proud of that.”

In addition to political activism, Sackett participated in neighborhood patrols, protecting people who would otherwise have been too afraid to venture out into the streets.

“This was the situation in New York back then and we knew that this was the case in pre-war Europe. This is what is happening today, in Europe and New York. This is a growing anti-Semitic trend around the world, not exclusive to but certainly including blacks.”

“We need to restart the JDL,” Sackett stated unequivocally.”But we also need to start a Jewish offense league. We can’t just wait to be attacked. We need to find what lies at the root of these situations and prevent them.”

“The JDL went up against the Black Panthers. But we also went head to head with Puerto Rican gangs and the Italian Mafia. Whoever threatened Jews”

Sackett quoted the JDL’s slogan “Never Again!” which was originally used by the Jewish resistance fighters in the Warsaw ghetto.

Sackett was an advocate for a strong response today that included arming with legal firearms.

“Who is going to stop the violence against Jews? Some community action group waving letters to their local politicians? By the time the government takes action, the damage is done.”

“I see it all as a result of a weak Israel,” Sackett said, highlighting the damage done by the 1993 Oslo Accords.  “When Israel is weak, jews in Brooklyn are in danger. When they throw rocks and Jews run away, when the IDF responds to threats with rubber bullets, Jews will be attacked in Monsey. We need to do what needs to be done in Israel to send the message that you do not mess with Jews. Period, end of the story.”

Sackett believes there is only one real solution.

“Jews need to come home,” he said. “Not out of fear but just because your soul needs to be here.”

The racial element of the recent anti-Semitic attacks is clearly at odds with the narrative pursued by many left-wing media like Slate Magazine  which frequently claims that the biggest existential threat facing the U.S. today is “right-wing terrorism.” The Tree of Life Synagogue shooting in November 2018 was carried out by a xenophobic white man but the shooting in the Poway Synagogue in April 2019 was carried out by a young man with a past of anti-Semitism but no known connection to any hate groups or white supremacists.

This tendency towards anti-Semitism among blacks was documented in a series of surveys carried out by the Anti-Defamation League in 2007, 2009, 2011, and 2013. The surveys all found that negative attitudes towards Jews were stronger among African-Americans than among the general population at large. Among black Americans with no college education, 43% fell into the most antisemitic group compared to 18% for the general population. 27% of blacks with some college education fell into the most antisemitic group as did 18% of blacks with a four-year college degree. This compared to 5% for those in the general population with a four-year college degree. Although the 1998 ADL survey found a strong correlation between education level and antisemitism among African Americans, blacks at all educational levels were still more likely than whites to accept anti-Jewish stereotypes.

This color component of anti-Semitism was addressed in an op-ed written by Seth Ftranzman in the J-Post in response to the Monsey attack.

“Hatred of Jews spans the white supremacist far-right and the black supremacist far-right and milieus in between. The difference is that society condemns and confronts comments by the white supremacists… When dealing with the wider world of antisemitism in the US, that crosses racial lines, it is more difficult to confront. In the US, since it is difficult to accept that minorities might also be racist, the elephant in the room of black antisemitism is not mentioned.”