Nation of Ishmael Lights Menorah with 70 Nations on Mount Zion 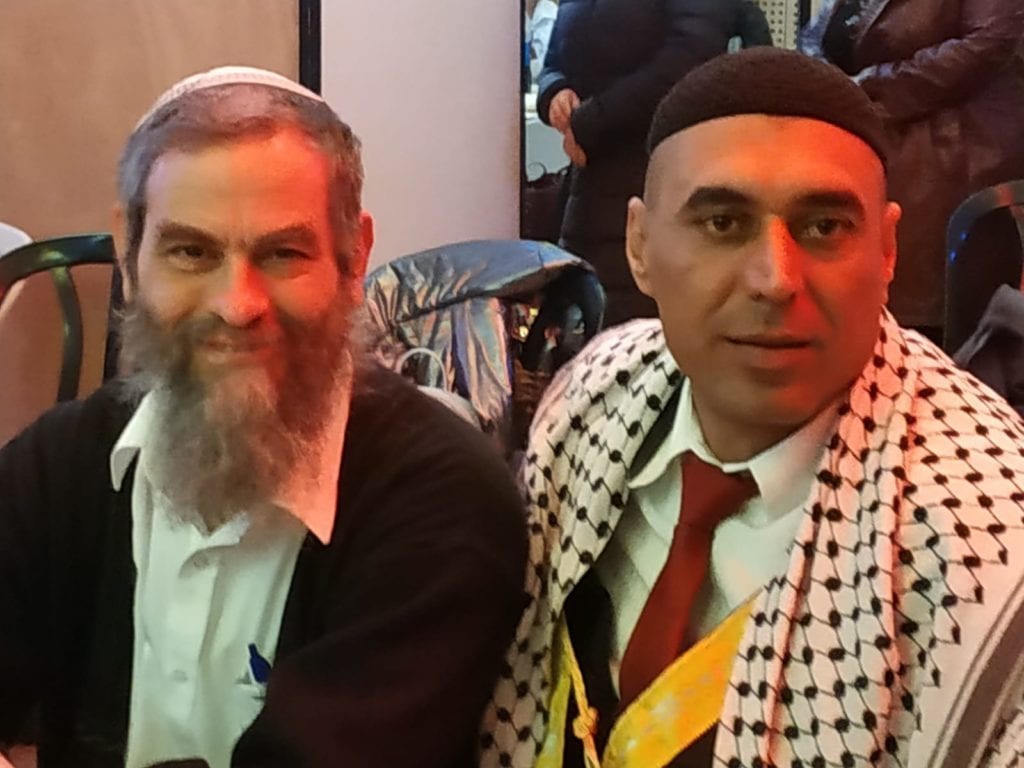 On Saturday night, the seventh light of Hanukkah, at the behest of Rabbi Aharon Stern, a prominent Haredi leader, the Sanhedrin hosted a Menorah lighting on Mount Zion for all nations. The gathering was intended to bring together representatives of all of humanity, in what is the battle call for the war of the Sons of Light against the Sons of Darkness.

The ceremony, a traditional Saturday night feast called מלווה מלכה (melaveh malkah; accompanying the king), was held in the King David hall on Mount Zion. The focus of the ceremony was the lighting of the seventh flame on a large nine-branched menorah.

In addition to the lighting of the menorah for the holiday of Hanukkah, a group of Kohanim (Jewish men of priestly descent) wearing the Biblically mandated garb performed a ceremony recreating the lighting of the Menorah as it was performed in the Temple. Though constructed of wood and not metal, the menorah is over one meter tall. Specially prepared to be used should a sudden call go out to jump-start the Temple service on the Temple Mount, the menorah was designed to be carried by one man.

The oil used in the lighting ceremony was prepared according to the strictest laws of purity that apply to olive oil prepared for use in the Temple.

The ceremony also included a reenactment of the burning of the incense.

In addition to being the seventh day of Hanukkah, Saturday night also marked the beginning of the Hebrew month of Tevet. When the Temple stood in Jerusalem, witnesses to the new moon would testify before the Sanhedrin. After accepting the testimony, the Sanhedrin declared the new month and a string of bonfires was lit on mountaintops to notify Jews in exile that the month had been declared.

A ceremony also reenacted the declaring of the new month

At the head of the group of priests was Rabbi Baruch Kahane who has headed the effort to educate and prepare priests for the Third Temple.

A delegation representing the Noahides was present at the event. This included a representative from the Arab nations; Muhammad Massad, a longtime resident of Haifa originally from Jenin. Massad is a devout Muslim who believes that his faith and Arab identity require him to support the Jewish return to Israel.

With a full understanding of what the holiday means for Jews and its historical roots of the Jews reconquering Jerusalem, Massad lit the Hanukkah menorah and spoke to the group in Hebrew.

“We are going to join together to push away war, to push away anyone who incites violence,” Massad said. “This land is the land of Abraham. We need to unite, to open our hearts. There is one God, the blessed one in heaven. We may not believe in other gods.”

Massad also had a lengthy conversation with Rabbi Kahane concerning the Jewish Temple in Jerusalem. Massad was interested in the role the Arabs will play in constructing the Temple.

“He noted that the Temple Mount is a Jewish place for a Jewish Temple,” Rabbi Hillel Weiss, the spokesman for the Sanhedrin, told Breaking Israel News.

Massad’s desire for the Jewish Temple came from his belief that the Organization of 70 Nations was the means to bring universal peace.

“At the root of the Organization of the 70 Nations is a total rejection of racism,” Rabbi Hillel explained. “It must be based in Jerusalem, whose name contains ‘peace’ and the word for ‘completion.’ Every nation must be accepted or there is no peace.”

Massad’s beliefs have led to him being targeted by Arabs who object to the normalization of relations with Israel. In June, Massad was slated to attend a U.S. organized conference in Bahrain but he backed out after learning that the other Arab delegates from Israel had anti-Israel agendas. The Palestinian Authority declared Massad to be a traitor and collaborator. Massad received a warning from the Israeli security service that PA general intelligence apparatus had tried to hire an Israeli criminal from Haifa to assassinate him while he was working in the city.

Massad was brought to the event by Chaim Parag, a resident of Hebron who has worked tirelessly to connect Jews and Arabs in peace.

The Noahide delegation was composed of representatives from Japheth and Massad represented the descend. Along with the Jews, the offspring of Shem, the event brought together all three sons of Noah, representing all of humanity.

It is significant that four years ago, the Sanhedrin met in the same place on Mount Zion to decide a court case in which former President Barack Obama and Pope Francis were accused of rejecting Israel’s Biblical covenant in which the descendants of Jacob are given the land of Israel.

“Our organization is coming to free the 70 righteous nations from under the rule of the 70 evil nations. Every nation is fighting an internal battle. Justice is the process of separation, declaring which side of the concept represents a godly and just claim. The knowledge of what is good and what is evil is distorted, perverted. It is now being fought within each nation.”

“By bringing the nations together into the light of Hanukkah, we hope the light will go out into the world enabling people to see the difference between good and evil. Hanukkah was and still is the battle between the Sons of Light and the Sons of Darkness.”

The ceremony also included a reading of the 35th chapter of Ezekiel which describes the punishments God will rain down upon the descendants of Esau/Edom.

Say to it: Thus said Hashem: I am going to deal with you, Mount Seir: I will stretch out My hand against you and make you an utter waste. Ezekiel 35:3

Rabbi Weiss noted that Edom is referred to by Ezekiel as Seir, signifying the pre-Messiah meeting of Jacob and Esau hinted at in their last meeting.