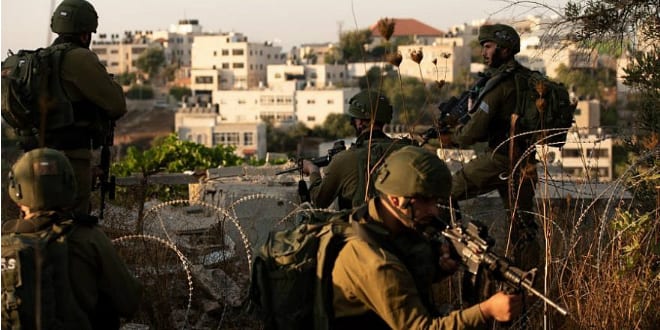 The Middle East has become crowded with an array of armed forces—ranging from coalitions of militaries to non-state actors—with many of them operating right on Israel’s doorstep.

The Israel Defense Force’s International Cooperation Unit (ICU), which handles the Israeli military’s external relations with other militaries, has been hard at work ensuring freedom of maneuver for Israel in the increasingly packed maze of Middle Eastern military operations.

Brig. Gen. Erez Maisel is the outgoing commander of the ICU. In an interview, he explained how the unit has handled relations with a variety of other militaries, including the Russian Armed Forces (Israel’s “new neighbor” in Syria), the Lebanese Armed Forces and Israel’s No. 1 strategic ally, the U.S. military.

“It is clear that our neighborhood is very crowded—in the air, at sea and on land,” he said. “This requires the IDF to take action on this issue as well and to address the question of how to coordinate all of this.”

The Unit was reformed in 2016, after the scope of regional changes made it clear to Israeli military planners that a change was in order.

The ICU functions at three levels of activity when it comes to working with other militaries: notification, coordination and cooperation.

Military diplomacy (which falls under the notification category) is the most basic level of activity, and it includes giving briefings and working with foreign military attachés.

The intermediate level of coordination includes working together with others to avoid unintended confliction in crowded battlespaces.

Active cooperation, including joint training and force build-up activities, represents the highest—and rarest—level of cooperation. Examples include combat drills with American, Greek and Cypriot armed forces, or hosting other air forces and navy ships for joint drills and visits.

“The campaign between wars is taking place. The IDF is fighting Iran and all of the things Iran knows how to bring to this region—the Islamic Revolutionary Guards Corps and the Quds Forces. And, of course, Hezbollah,” stated Maisel. “Many others are here as well, who are not our enemies. Some are partners. And we have to figure out how to deal with all of this. Our objective is to enable room for maneuver for the IDF.”

In that context, Israel and Russia have been managing a deconfliction mechanism, designed to prevent mishaps between the air forces of both countries in and around the Syrian arena. “Both are active here, and neither want anything to happen,” said Maisel.

Russia entered the Syrian conflict in 2015 due to a range of considerations—from seeking to prevent jihadist elements from spreading to the Caucus region, to economic and wider strategic considerations of re-establishing Russia as a great power player in the Middle East.

“Practically, they are here, activating air power,” noted Maisel. That necessitated the creation of a deconfliction channel that allows each side to conduct its missions without harming one another. The channel has been active for two years, he added, and it is based on two separate phone lines.

One line is dedicated for air-safety messaging; the second is for more strategic communications.

“We don’t want to exchange strategic messages on the line meant for air safety,” said Maisel. Israel’s military attaché in Russia, who is due to stay on his role for a fourth year, and Russia’s own attaché in Israel play important roles in this coordination. Every few months, a high-level Israeli military working group, headed by Maj. Gen. Aharon Haliva, head of the IDF Operations Directorate, meets with Russian counterparts.

“Phone lines are not enough. We have to discuss things at greater length,” said Maisel.

From borders to boardrooms

In recent years, the ICU has noticed a globalization of Israel’s environment due to the fact that a range of global actors have become interested in, and active within, the region. The result is that events in Syria, Lebanon, Egypt or Jordan are linked to wider global developments, said Maisel.

One example is the international community’s battle against ISIS in Syria. Another is the lack of stability and fast-paced changes in the international arena, which have found expression in neighboring countries.

To translate this understanding into operations, the ICU focuses on its methodology in response to developments, he said. “We understand that our officer working in [the Upper Galilee Kibbutz] of Misgav Am, who is building a security barrier, also has to be coordinated with strategic processes in Washington D.C.,” he said. “We call this the ICU spectrum. It stretches from borders to boardrooms. One cannot disconnect from the spectrum. As an organization, we have to see the whole picture. We connect between the international and the regional.”

Another example of this is the ICU’s ongoing work with the U.N. Interim Force In Lebanon (UNIFIL), the 10,500-strong peace support force made up battalions from around the world.

The ICU must be in touch with individual contributing countries to deal with specific issues since UNIFL’s battalions are under the command of their respective governments.

“It is not enough to talk to the UNIFIL Commander, even though he is a top-quality officer who is highly professional. I have to talk to the contributing countries, such as Italy, France and Spain, which influence the directive of the force,” said Maisel. This can be achieved by maintaining good contact with the military attachés from contributing countries and making Israel’s perspective clear to them.

The visit, arranged by the ICU, demonstrated to the Lebanese Forces (LF), Lebanon’s official military, that UNIFIL is highly accessible to Israeli senior command—a message that was important for the IDF to send during a period of high tension.

The photo of Del Col and Kochavi was seen on the Lebanese side, just as the IDF needs to know that UNIFIL is accessible to senior Lebanese military commanders, said Maisel. In fact, despite Israel lacking formal relations with Lebanon, Maisel meets with senior Lebanese generals every few weeks at UNIFIL’s border base south of the Lebanese town of Nakura. The meetings are designed to prevent mishaps and try to maintain some stability in the area, where Hezbollah lurks and builds up its force.

UNIFIL’s Italian battalion secures the Nakura base, and Israeli and Lebanese military officials hold trilateral meetings (together with U.N. representatives). During such meeting, explained Maisel, Israel informed the Lebanese Forces of its plans to engineer an artificial cliff and new security barrier. The Lebanese Forces have been able to prevent military friction on their side as Israel proceeded with its defensive engineering project over the past couple of years.

The barrier is designed to stop Hezbollah from deploying its elite Radwan force into Israel during future conflicts. Hezbollah’s previous plan of inserting thousands of Radwan operatives into northern Israel via underground offensive tunnels was wrecked by the IDF’s discovery and demolition of those tunnels during “Operation Northern Shield” in December 2018 and January 2019.

“When we started working on the engineering barrier, the Lebanese army knew. There were no surprises,” said Maisel. “The Lebanese Forces entered their area and went to the fence; Hezbollah had been there as well. The communications limited misunderstandings, which is the main goal here.”

Asked about frequent criticisms of UNIFIL regarding its inability to stop Hezbollah’s force build-up in southern Lebanon, in violation of U.N. Security Council Resolution 1701, Maisel argued that UNIFIL’s rules of engagement were drawn up by the United Nations in New York, not by the battalions themselves. “If someone is unhappy with the directives, there’s no sense in going to the UNIFIL battalion commander. These are the professional officers. The complaints should be directed to [the United Nations in] New York,” he said.

‘A dialogue of senior managers’

Meanwhile, in Syria, the IDF has helped the 1,000-strong U.N. Disengagement Observation Force (UNDOF) return to its base on the Syrian Golan Heights. UNDOF’s directive is to ensure that the demilitarized zone in southern Syria remains free from violations—a mission that it struggles to meet due to the presence of Hezbollah and Iranian proxies in Syria.

That challenge speaks to a wider problem faced by international forces that were designed for keeping 20th-century state militaries apart. Such forces find it difficult to deal with 21st-century non-state armed actors, which are part-military, part-terror organizations and part-guerilla forces, known in military circles as “hybrid threats.”

“In general, peace support operations are challenged by hybrid threats,” affirmed Maisel. “This was a key designed for a problem, and the problem has changed.”

Still, the IDF supports UNDOF’s return, he stressed, and its presence allows Israel to pass on messages into Syria. “The UN presence on the Golan Heights is important. Do they receive our support? Definitely. Hence, we reopened the Quneitra Border Crossing gate.”

The ICU is critical for maintaining the IDF’s partnership with the U.S. military on multiple levels, including Israel’s close working relationship with the U.S.’s European Command (EUCOM), which Israel is designated to.

“We have had a deep connection with EUCOM since the 1970s,” said Maisel. Annual missile-defense exercises, during in which EUCOM’s commander and other senior officers arrive in Israel, are a part of that connection.

At the same time, the United States’ Central Command (CENTCOM), which handles American military operations in the Middle East, also views cooperation with the IDF as being highly important. On a regular basis, officials from both CENTCOM and EUCOM arrive in Israel to assess the region and look at the latest situation.

“We hold a dialogue to understand one another better. That’s partnership,” said Maisel. “We hear one another. This is a dialogue of senior managers. From there, we can push forward.”

That communication extends to enabling U.S.-led coalition flights over Israeli territory. “For those from the West, Israel is on the way to the East. They don’t have to fly over us. The fact that they do is because we are a partner. For us, that is a right and a privilege,” said Maisel. “We are a silent but significant partner.”