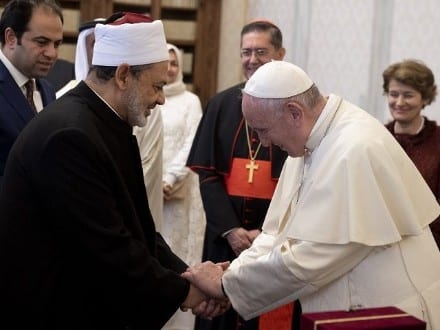 Pope Francis’ Christmas address shocked many as he rejected tradition, Western culture and compared Jesus in Bethlehem to a refugee.

His seventh Christmas address to the cardinals, bishops and ranking officials since his election in March 2013 was delivered in the 16th-century Clementine Hall of the Vatican’s Apostolic Palace.

“Christendom no longer exists!” Francis declared in his speech. “Today we are no longer the only ones who create culture, nor are we in the forefront of those most listened to.”

Pope Francis specified that the culture he was rejecting was European.

“We are no longer living in a Christian world, because faith — especially in Europe, but also in a large part of the West — is no longer an evident presupposition of social life; indeed, faith is often rejected, derided, marginalized and ridiculed.”

“The rigidity that is born from fear of change ends up placing numerous blocks and obstacles on the ground of the common good, transforming it into a minefield of lack of communication and hate.”

In his Christmas address, the pope also addressed the issue of refugees who he described as “discarded from globalized society.” He insisted these marginalized groups, “represent a voice crying in the wilderness of our humanity.” He compared refugees to Jesus as a  baby.

It should be noted that Jesus was not a refugee and was, in fact, described in the New Testament as being from the tribe of Judah.

In a recent speech, Pope Francis made an oblique reference to the immigration policies of President Trump as characteristic of King Herod perpetrating mass infanticide in an effort to kill Jesus.

‘Tradition is not static, it’s dynamic,’ Pope Francis said in his Christmas address.

There is no doubt that traditional Catholic values are being challenged under Pope Francis. In November, the pope announced that he would consider a request to allow married men to be priests. He is also considering the addition of ‘ecological sins’ the Catechism of the Catholic Church. Among the sins that Catholics would confess to a priest are whether their clothes are fairly traded, how many animal products they consume, and whether they overuse their mobile phones.

His policy in which homosexuals are welcomed into the church is so revolutionary that the American LGBT magazine The Advocate named Pope Francis their Person of the Year for 2013. In 2019, Pope Francis stated that homosexual “tendencies are not a sin. If you have a tendency to anger, it’s not a sin. Now, if you are angry and hurt people, the sin is there.” He has frequently met with openly homosexual and transgender people.

Some Catholic Churches are taking this agenda even further. Catholic dioceses in the United Kingdom are reportedly hosting homosexual Masses designed to welcome homosexuals into the church and combine “gay pride” with the Eucharist and other Romish sacraments. According to reports, these pro-homosexuality events have received blessings from the local Roman Catholic bishops. It should be noted that these events welcome homosexuals into the Catholic Church while not advocating celibacy.

The Pope has also been advancing his Declaration on Human Brotherhood.  The Declaration is a joint statement signed by Pope Francis and Sheikh Ahmed el-Tayeb, Grand Imam of Al-Azhar, last February in Abu Dhabi. The statement has been criticized for advancing the concept of one world religion.

Pope Francis has come under fire before for rejecting the Biblical covenant in which God gave the land of Israel to the descendants of Jacob. In November, the Pope criticized President Trump yet again for calling Jewish cities and towns in Judea-Samaria ‘legal’.

In 2015, 71 elders of the Sanhedrin tried the Pope in absentia for recognizing a “State of Palestine” with an official treaty. By doing so, the Sanhedrin claimed, the Pope was denying the covenant as described in the Bible in which God gives the land of Israel to the descendants of Jacob.