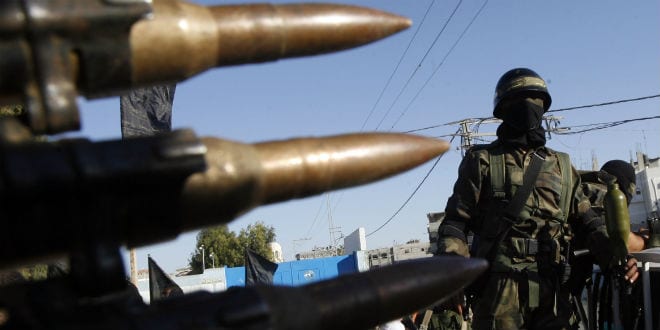 Elements in the Palestinian Islamic Jihad (PIJ), the Iranian-backed terror faction in Gaza, have been trying to outflank Hamas and brand themselves as the “true” jihadist entity operating out of the Strip, and civilians in both Israel and Gaza have been paying a price as a result.

Iran supplies PIJ with tens of millions of dollars per year, along with weapons transfers and know-how. PIJ remains Iran’s go-to organization for amplifying the Islamic Republic’s destabilizing influence in and around Gaza.

Both Hamas and PIJ are ideologically committed to the destruction of Israel through armed conflict, as well as to indiscriminately firing on Israeli civilians, and guerilla attacks on the Israel Defense Forces (IDF). But Hamas, which also receives funds and weapons know-how from Iran, is more constrained by its role as a government.

As a regime, Hamas has much to lose in any new full-scale conflict with Israel, and is – at least for now – deterred. As a result, Hamas has been responsive to Egyptian attempts to mediate a long-term truce arrangement, which would see international funds invested in Gaza in response to a lull in attacks on Israel.

Those factors do not apply to Iran’s closest proxy in Gaza, PIJ.

PIJ’s rocket arsenal amounts to more than 10,000 projectiles, and is larger than Hamas’s own inventory of surface-to-surface rockets. PIJ, like Hamas, uses local manufacturing processes to develop its arsenal, and embeds the launchers in the middle of Palestinian civilian neighborhoods. Iran pays for this terrorist infrastructure, while also transferring weapons production know-how and combat doctrines to PIJ operatives.

Through its sponsorship of Gaza’s terror armies, Iran ensures it has an influence in the Strip. PIJ’s military wing, the Al-Quds Brigades, some 10,000 armed members, compared with Hamas’s estimated 30,000-strong terrorist army, known as the Al-Qassam Brigades.

PIJ’s overall leadership is based in Beirut, but its local military commanders live in Gaza. PIJ elements inside the Strip recently have exploited the fact that they have no governmental responsibilities to position themselves as the “authentic resistance” organization. They have done this by targeting Israeli neighborhoods on the other side of the border with indiscriminate rocket fire, while also conducting sporadic sniper and IED attacks on Israeli military patrols. These actions have helped trigger multiple rounds of escalation with Israel in the past year.

“The Iranians are the main funders of this organization. PIJ is fully subordinate to them,” Brigadier-General (ret.) Yossi Kuperwasser, a senior fellow at the Jerusalem Center for Public Affairs, and former head of the research division in the IDF military intelligence branch, told the Investigative Project on Terrorism. “Do the Iranians explicitly give them instructions, or do they say, ‘do your best’? I do not know. What I can say is that, at least in the past six months, we have seen more independent operations by PIJ in Gaza. That could reflect an understanding within the organization – that it is expected to exhibit more activity against Israel, and to prevent the ceasefire arrangement, so more pressure can be applied on Israel from Gaza.”

According to a 2018 report by the Meir Amit Intelligence and Terrorism Information Center, “the Iranians’ generous support makes the PIJ and Iran interdependent, allowing the organization to maintain an extensive terrorist infrastructure in the Gaza Strip, making it second in importance only to Hamas.”

The report noted that PIJ “also has its own media network,” consisting of a satellite TV channel operated from Beirut, a radio station, and a news agency based in Gaza, as well as a social support system which is used to indoctrinate Gazan youths in radical Islamism.

PIJ leader Ziad Nakhaleh has been close to Iran for years, even before being voted in as secretary-general by PIJ’s ruling council in October 2018. He replaced Ramadan Shallah, who has reportedly been in a coma since last year.

Before Egypt demolished a network of smuggling tunnels leading into Gaza from Sinai, Iran was able to send Fajr 5 rockets into the Strip that can target Tel Aviv.

“We would like to thank our brothers in Iran for the great sacrifices they made to send us this weapon to protect the Palestinian people,” Nakhaleh said in a 2012 interview.

According to the Meir Amit Center, Nakhaleh works closely with Iranian Quds Force Commander Qassem Soleimani, whose unit is the premier Iranian overseas unit responsible for standing up and activating Iran’s terrorist proxies throughout the Middle East.

Nakhaleh also enjoys close ties with Hizballah’s leadership and meets frequently with them in Lebanon.

Publicly, Hamas and PIJ have attempted to sweep the tensions between them under the carpet and project an image of unity.

“We have agreed with Hamas and the other forces of resistance that there will be a response to every Israeli attack. No attack will pass without a response,” Nakhaleh said in a recent statement.

But Israel exposed the crack between Hamas and PIJ in November, when the IDF assassinated the de facto PIJ military commander in Gaza, Baha Abu Al-Atta, who had been behind a string of armed attacks on Israelis. In the two days of combat that followed, PIJ fired 450 rockets at Israeli civilians, and the Israeli Air Force killed armed PIJ members. Hamas, remarkably, did not get involved – a clear indication of its displeasure with PIJ’s actions.

Abu Al-Atta had challenged Hamas’s sovereignty in Gaza, and discarded Hamas’s strategy of pausing the fighting with Israel in order to regroup, rearm, and to give Gazan civilians a chance to recuperate before future conflict. As such, Abu Al-Atta became a problem for Hamas.

Iran may not have ordered him to take specific actions, but it certainly approved of what Abu Al Atta was doing.

“Abu Al-Atta understood that this is what was expected of him,” said Kuperwasser. “This pattern could still be in effect now among certain elements in PIJ.” Indeed there has been sporadic rocket fire on southern Israeli regions in the weeks, including a rocket attack early on Thursday, triggering retaliatory Israeli air strikes.

“It doesn’t mean there has been an explicit Iranian message to act, but PIJ is very dependent on Iran. I assume it wouldn’t do anything that the Iranians wouldn’t want,” said Kuperwasser.

The results of Iran’s investments in PIJ were on display last month, when the targets hit by the IDF during the escalation became apparent. The targets provide a glimpse into the extent of the force buildup underway by this organization.

After Israel’s elimination of Abu Al-Atta, Egypt, which has a stake in stabilizing the Gaza Strip, and Hamas, which is afraid of a popular revolt by Gazans against its rule, have been trying to rein in PIJ.

Both are able to exercise some influence on PIJ’s decision-making, Kuperwasser said, because PIJ is dependent on Egypt and Hamas for its freedom of movement.

“In addition, PIJ is playing a double game, portraying a picture according to which only some of its people are behind the attacks, not the whole of the organization,” he said. “This creates deniability, which they can present to Egypt and Hamas.”

At the same time, PIJ is also able to exercise some influence on Hamas. One indication of this is a recent Hamas statement that it is not interested in a maximal decade-long ceasefire with Israel at this time, but rather, prefers a minimal and shorter-term arrangement. At least part of the reason for that statement appears to be an effort to fend off charges by PIJ that Hamas is becoming “too soft” in its jihad against Israel.

A stable, long-term truce also runs contrary to Iran’s interests. The Iranian regime wishes to surround Israel with heavily armed proxy forces, able to threaten the Israeli home front at any given time.