Pompeo Brings Down the House

Home » Pompeo Brings Down the House 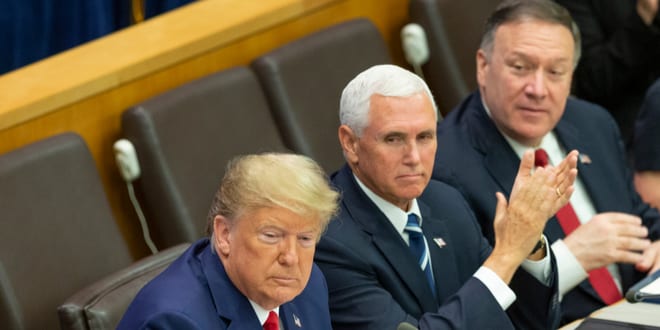 U.S. Secretary of State Mike Pompeo returned fire on Monday to a large group of House Democrats who lambasted him last month for declaring that Israeli settlements in Judea and Samaria (the West Bank) are not illegal.

In a letter to Michigan Rep. Andy Levin, who led 106 of his colleagues to sign a joint complaint against what they called the “State Department’s unilateral reversal on the status of settlements, without any clear legal justification,” Pompeo picked apart each false claim lobbed by the likes of “Squad” members Reps. Ilhan Omar (D-Minn.), Rashida Tlaib (D-Mich.) and Alexandria Ocasio-Cortez (D-N.Y.) with the force of an ax and the slice of a razor blade.

Kudos to him for putting them in their place, particularly when their objections are as far-fetched as their objectives.

Take their ridiculous assertion, for instance, that the announcement about the legitimacy of Israeli settlements “has discredited the United States as an honest broker between Israel and the Palestinian Authority, severely damaged prospects for peace and endangered the security of America, Israel and the Palestinian people. … [It also has] offered a tacit endorsement of settlements, their expansion and associated demolitions of Palestinian homes … ”

Fully aware that the only “severe damage” to “prospects for peace” and “endangerment” to Israeli and Palestinian security have been done by the powers-that-be in Ramallah and Gaza, whose aim is to obliterate the Jewish state, Pompeo blasted the Democratic reps for their “foolish positions.”

In his rebuttal, he focused on four arguments, beginning with the last kick in the pants that the previous administration in Washington gave Israel before being shunted out of office.

In the first place, he wrote, the State Department’s decree did not constitute a reversal of policy, but “of a legal determination by [former U.S.] Secretary [of State John] Kerry, made during the waning days of the Obama administration, that the establishment of settlements was categorically inconsistent with international law.”

This was Kerry’s “failed attempt,” Pompeo explained, “to justify the … administration’s betrayal of Israel” at the United Nations, when he allowed the U.N. Security Council to pass Resolution 2334 on Dec. 23, 2016.

Secondly, Pompeo said, the above move “received bipartisan condemnation,” as it “departed from decades of bipartisan consensus, including from leading Democrats in both chambers of Congress.”

In fact, he added, “It revert[ed] to an approach last advanced … in 1978” by the Carter administration, and subsequently reversed during Ronald Reagan’s presidency.

Therefore, he went on, “While you are free to fixate on settlements as a barrier to peace, you are simply wrong in referring to that view as being subject to bipartisan agreement … ”

Then Pompeo blasted the Democratic representatives’ third assertion—that the decision on settlements showed a “blatant disregard” for the Fourth Geneva Convention.

On the contrary, he stated, suggesting that they read the works of Eugene Rostow for edification. Rostow served as under secretary of state for political affairs in the Johnson administration, and was instrumental in drafting U.N. Security Council Resolution 242, “which even today remains the primary architecture for the Israeli-Palestinian peace process.”

In 1983, Pompeo pointed out, Rostow, who had been the dean of the Yale Law School before taking his post with the government, wrote that “Israel has an unassailable legal right to establish settlements in the West Bank.”

For his fourth and final one-two punch, Pompeo accused Kerry of having “saddled the Trump administration with a significant handicap in advancing the cause of peace by erroneously injecting into the conflict an incorrect and largely irrelevant legal component. This in turn has led to the hardening of positions, especially on the Palestinian side. By way of example, the closing of the Office of the General Delegation of the Palestinian Liberation Organization in Washington D.C., which you criticize, was mandated by Federal statute following [Palestinian Authority] President [Mahmoud] Abbas’ announcement before the United Nations General Assembly on September 20, 2017, ‘call[ing] on the International Criminal Court … to prosecute Israeli officials for their involvement in settlement activities … ’ ”

Indeed, he said, “I doubt that President Abbas, with apparent animus towards Israel, would have taken such an inappropriate and unlawful position absent the cover mistakenly granted under UNSCR 2334 and Secretary Kerry’s unfortunate speech.”

In other words, he concluded, “The Obama-Kerry departure from America’s historic support of Israel has done nothing to make peace more attainable,” while the current “State Department’s recent determination that the establishment of Israeli civilian settlements in the West Bank is not per se illegal is an important step in the peace process … [and] creates the right platform for further progress … ”

Pompeo is right for calling the Democrats to task for turning their backs on Israel, which has tried desperately over the years to reach a peace agreement with the Palestinians and received nothing but bloodshed in return. He and the administration he serves also deserve credit for the many and varied pro-Israel policies implemented since U.S. President Donald Trump entered the White House.

Sadly, however, nobody in Washington should harbor hope that the yet-to-be-unveiled “deal of the century” will be more successful than previous peace-plan fantasies. Yes, even if every House Democrat were replaced by a pro-Trump Republican, there is no chance of progress as long as the Palestinian leadership and its vile ideology remain in place.

Being a smart guy and a very different kind of diplomat from his predecessors, Pompeo probably knows this already. But watching him bring down the House by turning the peace tables on it was a pleasure nevertheless.