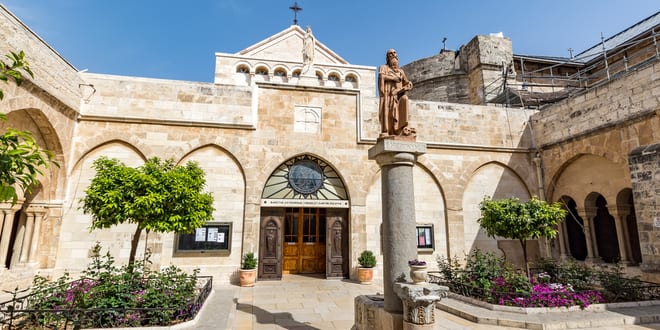 Tazpit Press published a report on Sunday stating that eleven institutions associated with the Greek-Orthodox Church signed a statement protesting the ongoing attempt by the Palestinian Authority (PA) to take control of the plaza in front of the Church of the Nativity in Bethlehem.

The Church of the Nativity is located in Bethlehem and holds a prominent religious significance to Christians of various denominations as the purported birthplace of Jesus. The original basilica was likely built around 330 CE but was destroyed around 529 CE. The current structure is believed to have been built soon after.  It covers approximately 12,000 square meters, comprising three different monasteries: Greek Orthodox, Armenian Apostolic, and Roman Catholic.

According to the Tazpit report, Theophilos III, the Greek Orthodox  Patriarch of Jerusalem, claimed the Palestinians are harming the Christian presence in Bethlehem, forfeiting their rights, harming Church assets and violating their right to light Christmas trees on the plaza.

Ironically, last year, the Palestinians protested against the Greek Orthodox Church at the Christmas celebration in Bethlehem. The Palestinians were angered over the church selling land to Jews in Jerusalem. According to a source cited by the Tazpit report, the PA actions are intended to “counteract” those sales.

The same source claimed, “that Christmas ceremonies are gradually turning from a religious Christian event to a national event sponsored by the PA, even though in recent years it has acted to deprive Christians of their properties.”

The report also claimed that Palestinian authorities in the nearby village of al-Azzariya are in the process of taking over the Tomb of Lazarus in order to operate the Christian holy site as a for-profit tourist site. Tazpit reported that “thugs” are demanding entry fees.

Since 2012, the Church of the Nativity is a World Heritage Site and was the first to be listed by UNESCO under ‘Palestine’. Christian access to the site is permitted under the same Ottoman Status Quo agreement established 250 years ago that applies to Jewish holy sites, such as the Temple Mount in Jerusalem.

Following the 1967 Six-Day War, Israel took control of the city. In 1995, Israel officially withdrew from Bethlehem and the city came under the administration and military control of the PA. The economy of the city is primarily tourist-driven, peaking during the Christmas season when Christians make the pilgrimage to the Church of the Nativity.

This change in demographics does not bode well for Christian residents of the Holy Land. In April, Palestinian gunmen attacked Christians in the village of Jifna in Samaria. Like Bethlehem, Jifna was a Christian-majority city until recently. The gunmen vandalized property, fired into the air, and demanded that the Christians pay jizyah (an annual tax levied on non-Muslim subjects living under Islamic rule.)

In 2002, dozens of Palestinian terrorists took over the Church of the Nativity, taking some 200 monks hostage. The Franciscan order claimed that the monks chose to remain, aligning with the Palestinians. After 39 days, an agreement was reached, according to which the militants turned themselves in to Israel and were exiled to Europe and the Gaza Strip. A total of 8 Palestinians had been killed, and an Armenian monk was also wounded. Israeli police reported finding 40 explosive devices that had been left in the church by the Palestinians, several of them booby-trapped.

The land-grab by the PA does not seem to bother the Vatican which is highly supportive of the PA and gifted them a precious relic last month.