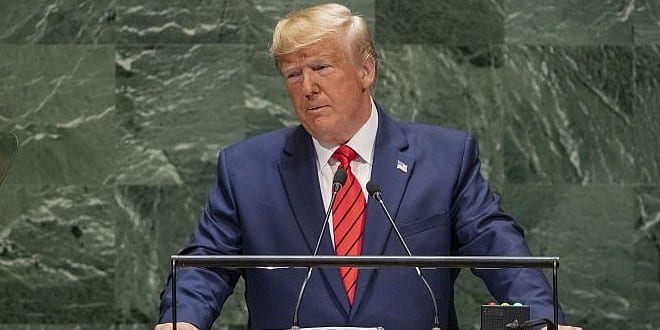 The past week has clarified a lot of things about the state of the American Jewish community — and its antagonists.

The two assailants who walked into the kosher supermarket in Jersey City Tuesday and opened fire intentionally targeted the Jews. They killers belonged to the black supremacist, virulently anti-Semitic “Black Hebrew Israelite” movement which claims its members are the true children of Israel and the Jews are satanic imposters.

The shooting in Jersey City marked a predictable escalation of the anti-Semitic attacks being carried out against Orthodox Jews in the New York area. The focal points of the attacks to date have been the ultra-Orthodox communities in Brooklyn. Over the past two years, the frequency of the assaults has increased sharply. Most of them have been perpetrated by black anti-Semites. None have been carried out by white supremacist anti-Semites.

This is an important distinction because progressive politicians like New York Mayor Bill De Blasio and Senator Bernie Sanders routinely present the anti-Semitic violence in Brooklyn as the product of white supremacists.

These forms of Jew hatred pose a greater threat to Jewish life in America than white nationalist anti-Semitism for two reasons. First, whereas white supremacists are political orphans, with no political party willing to embrace them, progressive, Islamist and black anti-Semites are deeply embedded in the political left. Over the past 15 years, they have become powerful actors in the Democratic Party capable of bending the party to their will.

The second reason they pose a greater danger to Jewish life in America than white nationalists is because while socialist, Islamist and black anti-Semites will not cooperate with white supremacist anti-Semites, they are more than happy to work with one another to achieve their common goals. They cover for one another – as Sanders and De Blasio cover for the black anti-Semites in Brooklyn. They support one another, as both men embrace Islamist anti-Semite Linda Sarsour. Thursday Cong. Rashida Tlaib claimed that white supremacists were responsible for the attack in Jersey City.

The place where the three types of anti-Semites converge most powerfully and so present the greatest threat to Jewish life in America is on college campuses. In campuses throughout the U.S., Jewish Americans are compelled to keep their heads down or face abuse and harassment due to their common efforts to ostracize Jewish students and professors who fail to actively condemn Israel.

Over the past several years, Congress made several attempts to amend Title VI to include anti-Jewish discrimination. These efforts enjoyed broad bipartisan support. But they were all blocked by members of the progressive camp inside the Democratic Congressional caucus. Like the anti-Semitic boycott activists ostracizing Jews on campuses, the progressive lawmakers claimed that expansion of the protections of Title VI to include anti-Jewish discrimination would undermine the free speech rights of anti-Israel activists on campuses. That is, they said the rights of anti-Semites to preach anti-Semitism superseded the rights of Jewish students not to be harassed.

Wednesday, President Donald Trump put an end to this madness by signing an executive order requiring federal agencies dealing with allegations of anti-Semitism on campuses to consider the complaints in light the “working definition of anti-Semitism…by the International Holocaust Remembrance Alliance.”

The IHRA definition of anti-Semitism was adopted by several governments and the State Department. It provides examples of manifestations of anti-Semitic behavior including “denying the Jewish people their right to self-determination, e.g., by claiming that the existence of the State of Israel is a racist endeavor; applying double standards by requiring of it a behavior not expected or demanded of any other democratic nation; using the symbols and images associated with classic anti-Semitism…to characterize Israel or Israelis; drawing comparisons of contemporary Israeli policy to that of the Nazis;” and “holding Jews collectively responsible for the actions of the state of Israel.”

These are, of course, the standard practices of anti-Semites on college campuses and beyond. So by ordering the Federal government to use the IHRA definition as their framework for determining the validity of Title VI complaints of anti-Semitic discrimination on campuses, Trump provided Jews with the means they have lacked to defend themselves from that discrimination. He also carved a path to expose and fight the fastest growing and most politically and socially potent anti-Semitic forces in America.

Rather than report what he did, the New York Times seemingly deliberately mischaracterized Trump’s actions.

In its Twitter feed, the New York Times reported Trump’s action thus: “President Trump will sign an executive order defining Judaism as a nationality, not just a religion, thus bolstering the Education Department’s efforts to stamp out “Boycott Israel” movements on college campuses.”

This tweet was so off-base that it is impossible to view it as a mere misunderstanding by the paper of record for the liberal establishment. The assertion that Trump’s move “defined Judaism” smacks of cultural appropriation, and as such, it sounds like an act of aggression against Jews.

By falsely claiming Trump defined Judaism as a nationality, the Times made it sound like Trump was saying that Jews aren’t American nationals.

And by writing the purpose of the effort was to “stamp out ‘Boycott Israel’ movements on college campuses,” rather than protect Jewish students from anti-Semitic harassment, the Times made the order seem like a political ploy rather than a civil rights action long supported by Democrats and Republicans alike.

Liberal Jews pounced on the message and ran with it. Halie Soifer, the executive director of the Jewish Democratic Council of America accused Trump of being “partially responsible” for the rise of anti-Semitism in America.

“If President Trump truly wanted to combat anti-Semitism,” she said, “he would accept responsibility for his role in perpetuating anti-Semitic conspiracy theories and emboldening white nationalism.”

“We said it before and we’ll say it again – Donald Trump is the biggest threat to American Jews,” she added.

J-Street’s executive director Jeremy Ben-Ami echoed the criticism of BDS advocates in Congress and on campuses by claiming that the executive order harms the free speech rights of anti-Israel activists. In his words, “The executive order, like the stalled congressional legislation it is based on, appears designed less to combat anti-Semitism than to have a chilling effect on free speech and to crack down on campus critics of Israel.”

Undoubtedly, Soifer and Ben Ami were directing their statements towards the “a-political” Jewish establishment in the hopes of mobilizing them against the pro-Jewish executive order.

In the event, they failed. The Anti-Defamation League and the American Jewish Committee both applauded Trump’s executive order.

But Soifer and Ben Ami had grounds to think the ADL and AJC would join them in characterizing Trump’s friendliness and support for Jewish people as anti-Semitism. Earlier this week they did.

Last Saturday night, Trump delivered the keynote address at the Israeli-American Council’s annual conference in Miami. Trump’s hour-long event was a love fest. Trump exuded warmth and respect towards his audience and towards Israel and they returned the sentiments.

He promised to fight anti-Semitism in America with the same energy with which he defends Israel and brought people onto the stage to outline the work the administration has done to combat anti-Jewish bigotry in America and throughout the world.

Yet, immediately after Trump completed his remarks, the floodgates of hatred opened up on him from the Jewish establishment. Everyone from Soifer to Jennifer Rubin from the Washington Post and Paul Krugman from the New York Times, accused Trump of delivering an anti-Semitic rant. The ADL and AJC jumped on the bandwagon and tweeted angry denunciations.

What was it that Trump said that made them so angry?

Trump said, “A lot of you are in the real estate business because I know you very well. You’re brutal killers. (Laughter) Not nice people at all. But you have to vote for me; you have no choice. You’re not going to vote for Pocahontas, I can tell you that. (Laughter and applause.) You’re not going to vote for the wealth tax. ‘Yeah, let’s take 100 percent of your wealth away.’ No, no. Even if you don’t like me; some of you don’t. Some of you I don’t like at all, actually. (Laughter.) And you’re going to be my biggest supporters because you’ll be out of business in about 15 minutes, if they get it.”

The royal host of the American Jewish establishment hissed that in speaking thus, Trump reinforced the anti-Semitic stereotype that Jews love money.

As he said, Trump was addressing his fellow real estate developers in the crowd. He was talking to them as his friends and competitors, not as his enemies. When he said, “You’re brutal killers” he was paying them a compliment. They understood, which is why they laughed.

Trump’s claim that they would vote for him even if they didn’t like him because they feared the Democrats’ confiscatory tax policies is his standard line on Democratic tax policy. He says it to everyone, not just to Jews. The audience knew this too – which is why they laughed and applauded.

The Jewish establishment types joined the bandwagon and agreed Trump’s playful, friendly statement was anti-Semitic because they want to believe Trump is an anti-Semite. If Trump is an anti-Semite then it’s reasonable for them to remain loyal to the Democratic party which, led by “the squad” is leaping towards the anti-Semitic cliff that Britain’s Labour Party jumped off when it elected Jeremy Corbyn its leader.

In other words, they slander Trump as an anti-Semite because they prefer their partisan interests to the interests of the Jewish community in America and the Jewish people throughout the world.

Luckily, as Trump’s consistent record of support for Israel and the Jews in America and worldwide and as his warmth for Jewish people makes clear, the President doesn’t have an anti-Semitic bone in his body. And he won’t become an anti-Semite no matter how poorly the American Jewish establishment treats him.

Trump’s Jewish critics said he was trafficking in anti-Semitic “tropes” when he told the IAC, that in the U.S. “you have people that are Jewish people, that are great people – they don’t love Israel enough.” But he was doing no such thing. He was telling the truth. Those Jewish people love neither Israel nor the children of Israel, the Jewish nation enough.

Thankfully, President Trump loves the Jews and Israel so much that he makes up for them.