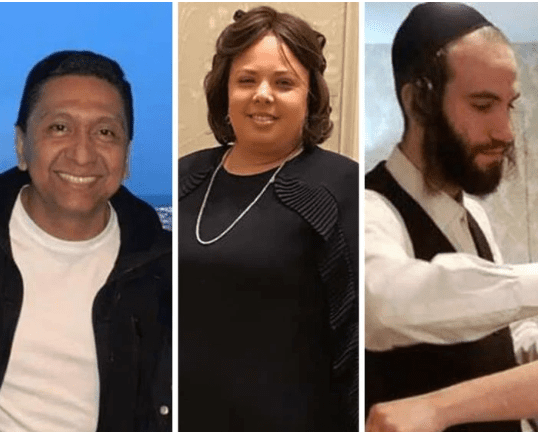 The three civilians killed inside the grocery store in Jersey City were identified as 33-year-old Leah Mindel Ferencz of Jersey City, a Chassidic woman who owned the store with her husband, Moshe David; Moshe Hersch Deutsch, 24, of the Williamsburg neighborhood of Brooklyn, N.Y; and Miguel Douglas, 49, an employee at the store. Ferencz’s husband had left the grocery store just moments before the attack began to attend services at a synagogue next door. Also killed at the start of the hours-long incident was Jersey City Police Det. Joseph Seals, a 39-year-old father of five.

Newly released footage of the attack can be seen here:

The two suspects were identified on Wednesday as David Anderson and Francine Graham. They were killed inside the kosher market. According to reports, after killing Seals, the couple drove to the kosher market on Martin Luther King Drive one mile away, firing their weapons into the store from the sidewalk before barricading themselves inside and launching into a high-powered rifle shooting spree that lasted for hours.

It has also been confirmed that Anderson was a member of the Black Israelites. The Black Israelites are replacement theology a cult who believes that black people exclusively are the real Jews and that Ashkenazi (those who fled to Europe) and Sephardi (Those who fled to Spain, North Africa, and the Middle East) Jews are impostors. And although they claim to be the “real Jews”, they pray in ‘churches’ and primarily use Christian text as the foundation for their teachings. Their church is formally called the Israelite Church of God in Jesus Christ.

In the tweet below, the Black Israelites can be seen openly preaching in LA that white people deserve to die.

Remember the Black Hebrew Israelite group that yelled racist slurs at the Covington Catholic boys? I encountered them in LA and they unashamedly called for the genocide of white people. pic.twitter.com/7Lfvyq6LZf

Ironically, in the video below, the cult’s leader, Commander General Yahanna tells white people to “rest assured” they are not going to resort to violence:

Almost a year ago, the same Black Israelites harassed and intimidated a group of high school boys from the Covington Catholic High School. Junior Nick Sandman, who was at the center of the controversy wrote that: “they called us ‘racists,’ ‘bigots,’ ‘white crackers,’ ‘faggots’ and ‘incest kids.’ They also taunted an African-American student from my school by telling him that we would ‘harvest his organs.’ The confrontation can be seen in the video below:

In an almost prophetic manner, the FBI published a report in 1999 entitled “Project Megiddo” in which group was listed as a group that had the potential to turn violent and radical.

In Israel, the Black Israelites have set up a compound in the southern Israeli city of Dimona in an estimated 2,500 strong community. There, members have revealed that severe punishments are said to be meted out by leaders to members of the community. There are cellars, he said, where followers who “stray from the path” are beaten with sticks until they once again “see the light” and return to the path of the righteous. As American citizens, the community is also being investigated by the US State Department in social security fraud cases that authorities say, reaches into the millions of dollars.

Their late leader, Israel Ben Ammi was a close associate with virulent antisemite Lois Farrakhan who even referred to him as “Rabbi Ben-Ammi”.

One witness who says that she lives in a town where many of the cult members live. She recalls an elderly Black Israelite man telling a younger cult member that their duty to kill Jews in the end-of-days. He also said that “they must acquire guns and ally with the Arabs for this purpose.”

And just to add insult to injury, a group of Jersey City locals can be seen in the video below blaming the Jewish victims themselves for the massacre: