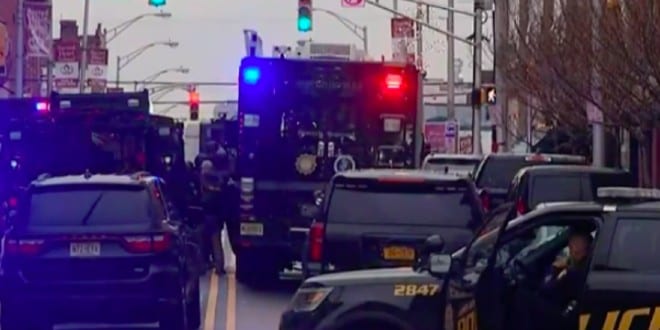 In a return to the Obama era, officials initially denied that the shooting that killed six targeted a Jewish location. At least six people were killed on Tuesday afternoon inside the JC Kosher Supermarket in Jersey City, N.J. The shooting began at 12:30 PM, starting at a cemetery, where the officer was gunned down. The three gunmen then drove a stolen rental van to the kosher supermarket about a mile away, where five more bodies were found.

Three civilians, one officer, and two suspects were reported killed. An eyewitness confirmed that two of the civilians are members of the local Chassidic community. Others were injured as a result of rapid-fire shooting by two male suspects entering the store and were taken to a local hospital. Jersey City Police Chief Michael Kelly said that when police responded to the area of the kosher store, officers “were immediately engaged by high-power rifle fire.”

“Our officers were under fire for hours,” the chief said. When the shooting was first being reported, Police stated that the motives were not related to anti-Semitism or terrorism. The Jewish Democratic mayor of Jersey City, Steven Fulop, revised that assessment in the middle of the night.

Based on our initial investigation (which is ongoing) we now believe the active shooters targeted the location they attacked. Due to an excess of caution the community may see additional police resources in the days/weeks ahead. We have no indication there are any further threats

It should be noted that Fulop’s update did not suggest that the site was targeted for its Jewish nature. The market was the only kosher supermarket in the area and a central fixture for the growing community which included a bearby yeshiva and synagogue.

The identity of the shooters has still not been released and authorities are not revealing the motive for the targeted shooting.

Fulop’s remarks echo those made by former President Barack Obama who described the Islamist Paris Hypercacher kosher supermarket siege in 2015 as “vicious zealots who behead people or randomly shoot a bunch of folks.” Obama’s remarks ignored both the Muslim identity and motives of the killers and the Jewish identity of the victims.

Fulop was an outspoken supporter of Obama and met with him several times.

According to Chabad.org, the store is located next to a small synagogue and school with about 40 Jewish children, said Rabbi Shmuel Levitin, who directs Chabad Young Professionals of Hoboken and Jersey City with his wife, Esta, and frequents the market.

The store owner had left moments before the shooting began to pray the afternoon Mincha service at the synagogue and was unable to return, said Rabbi Moshe Schapiro, co-director of Chabad of Hoboken and Jersey City, who has been in touch with him.

Nearby schools, including a Catholic one, were first on lockdown; however, the children—all safe—have since been dismissed.

“Our thoughts and prayers are with the men and women of the Jersey City Police Department, especially with the officers shot during this standoff, and with the residents and schoolchildren currently under lockdown,” said New Jersey Gov. Phil Murphy. “I have every confidence in our law-enforcement professionals to ensure the safety of the community and resolve this situation.”

At least one Democrat politician wasted no time connecting the unfolding situation to the calls for gun control.

Gun violence is my top priority! We’ve already passed bills and I am pushing my gun buyback bill to get these guns off the street.https://t.co/qtqLjgxyiY

EDITOR”S NOTE: Sections of this article were reprinted from JNS with permission