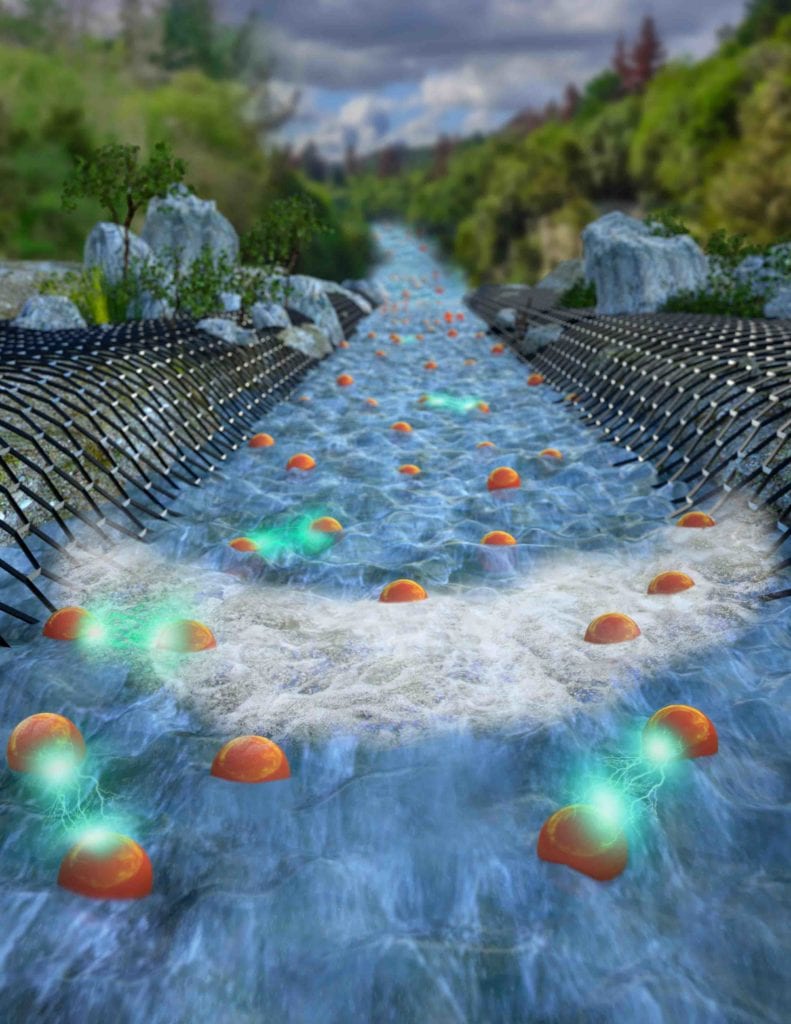 When you plug your cellphone into an electric outlet so it can “fill up” with electricity, you might visualize the current as electrons flowing freely like cars go down a highway. Even if we could view electrons – subatomic particles that orbit the nucleus of an atom and are generally negative in charge and much smaller than the atomic nucleus – they would move too fast for the human eye.

Electricity is basically the exchange of electrons in a stream called a current through a conducting medium. In most cases the medium is an acid, metal or similar conductor; in the case of static electricity, a stream of electrons travels through the air.

Any conductor (substance through which electricity moves) is made of atoms. Each atom has electrons in it. If you put new electrons in a conductor, they will join atoms, and each atom will spit out an electron to the next atom. This next atom takes in the electron and spits out another one on the other side.

Electron movement though materials usually looks more like that of gas than a fluid – that is, they do not collide with one another, but rather, they tend to bounce off impurities and imperfections in the material. A fluid flow, in contrast, takes its shape – be it waves or whirlpools – from frequent collisions between the particles in the fluid.

Researchers at the Weizmann Institute of Science in Rehovot recently succeeded – with the help of specially-produced, nanoscopic “pipes” – to capture an image of electrons flowing like the water in household pipes leading to a shower or kitchen sink.

This is the first time such “liquid electron flow” has been visualized, and it has vital implications for future electronic devices.

To make electrons flow like a fluid, one needs a different kind of conductor, and the team turned to graphene, which is a one-atom-thick sheet of carbon that can be made very clean. “Theories suggest that liquid electrons can perform cool feats that their counterparts cannot. But to get a clear-cut proof that electrons can, indeed, form a liquid state, we wanted to directly visualize their flow,” said Prof. Shahal Ilani, head of the team in Weizmann’s condensed matter physics department

In a new study just published in the prestigious journal Nature Nanotechnology, the Weizmann Institute researchers applied their novel imaging technique to state-of-the-art graphene devices produced in the group of Prof. Andre Geim at the University of Manchester.

Their demonstration – that given the right conditions, electrons can mimic the patterns of a conventional fluid – could help in the creation of new types of electronic devices, including low-power ones in which hydrodynamic flow lowers the electrical resistance. “Computing centers and consumer electronics are devouring an ever-increasing amount of energy, and it’s imperative to find ways to make electrons flow with less resistance,” said Dr. Lior Ella, also of Ilani’s group.

The devices were microscopic “pipes” – tiny channels designed to guide the flowing electrons. The team observed the hallmark signature of hydrodynamic flow: Just like water in a pipe, the electrons in the graphene flowed faster in the center of the channel and slowed down at the walls. .

While numerous techniques have been devised to image electron

flows, the need remains for a nanoscale probe capable of simultaneously imaging current and voltage distributions with high sensitivity and minimal invasiveness, in a magnetic field, across a broad range of temperatures and beneath an insulating surface.

Even using graphene as a conductor, the team needed to develop a technique that would be both powerful enough to peer inside a material, yet gentle enough to avoid disrupting the electron flow.

“Here we present a technique for spatially mapping electron flows based on a nanotube single-electron transistor, which achieves high sensitivity for both voltage and current imaging. In a series of experiments using high-mobility graphene devices, we demonstrate the ability of our technique to visualize local aspects of intrinsically non-local transport, as in ballistic flows, which are not easily resolvable via existing methods. This technique should aid in understanding the physics of two-dimensional electronic devices and enable new classes of experiments that image electron flow,” they wrote.

This technique consists of a nanoscale detector built from a carbon-nanotube transistor, and the team found that it can create an image of the properties of flowing electrons with unprecedented sensitivity. “Our technique is at least 1,000 times more sensitive than alternate methods; this enables us to image phenomena that previously could only be studied indirectly,” explained staff scientist Dr. Joseph Sulpizio, who was also a member of Ilani’s team.