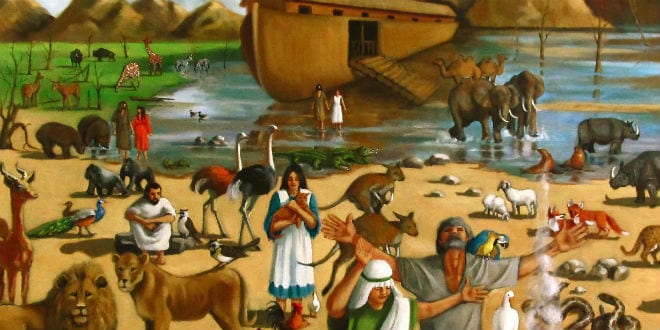 Dr. Martin Worthington,  a senior lecturer in Assyriology at the University of Cambridge, published a new book last month titled  Ea’s Duplicity in the Gilgamesh Flood Story in which he analyzes the Gilgamesh Epic, a 3,000-year-old epic poem from ancient Mesopotamia that predates the Bible and relates a story similar to the Biblical story of the flood in the time of Noah.

THE GILGAMESH EPIC AND THE FLOOD STORY

Only a few tablets of the Gilgamesh Epic have survived. The later “standard” version dates from the 13th to the 10th centuries BCE. Some of the best copies were discovered in the library ruins of the 7th-century BCE Assyrian king Ashurbanipal.

Dr. Worthington based his theories on the 11th tablet of Gilgamesh, dating back to 700BC, which provides the Babylonian account of the legendary Biblical flood written in cuneiform considered by some historians to be the oldest example of a written language. Gilgamesh is a historical king of the Sumerian city-state of Uruk whose supposed historical reign is believed to have been approximately 2700 BCE. He observes that a man named Utnapishtim was immortal and inquires as to how he acquired immortality. Utnapishtim claims his immortality came as a result of his role in a global flood.

Gods from the Mesopotamian pantheon name Anu, Enlil, Ninurta, Ennugi, and Ea decided to flood the earth. They were sworn to secrecy about these plans But the god Ea repeated the plan to Utnapishtim through a reed wall in a reed house. Ea commanded Utnapishtim to demolish his house and build a boat, regardless of the cost, to keep living beings alive. Ea instructed him with precise dimensions, 120 cubits square with six decks, telling him to seal it with pitch and bitumen. He assembled craftsmen and built the ark. The boat had a rudder and punting poles to propel it.

When it was complete, a feast was held after which Utnapishtim’s entire family went aboard along with his craftsmen and “all the animals of the field”. He also loaded the boat with god and silver.

A violent storm then arose which terrified the gods, causing them to retreat to the heavens. The female goddess, Ishtar, lamented the wholesale destruction of humanity, and the other gods wept beside her.

The storm lasted six days and nights, after which “all the human beings turned to clay”. Utnapishtim wept when he saw the destruction. His boat landed on a Mount Nimush after which he released a dove, a swallow, and a raven. The dove and swallow returned but the raven failed to return and Utnapishtim opened the ark and all the passengers exited.

Utnapishtim offered a sacrifice to the gods, who smell the sweet savor and crowded around “like flies.” Ishtar vowed that just as she will never forget the brilliant necklace that hangs around her neck, she will always remember this time. When Enlil arrives, she is angry that there are survivors. Ea stands accused of leaking the plans of a flood but she countered Enlil by saying that the flood was a disproportionate punishment. Enlil repents blesses Utnapishtim and his wife, rewarding them with eternal life.

In his new book, Dr. Worthington says that in the Mesopotamian flood story, the pagan gods tempted the humans into the ark with lies.

“Ea tricks humanity by spreading fake news. He tells the Babylonian Noah, known as Utnapishtim, to promise his people that food will rain from the sky if they help him build the ark. What the people don’t realize is that Ea’s nine-line message is a trick: it is a sequence of sounds that can be understood in radically different ways, like English ‘ice cream’ and ‘I scream’”, Dr.  Worthington explained. “With this early episode, set in mythological time, the manipulation of information and language has begun. It may be the earliest ever example of fake news.”

The professor notes that the cuneiform script “ina lilâti ušaznanakkunūši šamūt kibāti” can translate as “at dawn, there will be kukku cakes”. However, this can equally mean “at dawn, he will rain down upon you darkness”.

Dr. Worthington proposed a theory to explain the motive behind the subterfuge.

“Babylonian gods only survive because people feed them,” Dr. Worthington said. “If humanity had been wiped out, the gods would have starved. The god Ea manipulates language and misleads people into doing his will because it serves his self-interest. Modern parallels are legion!”