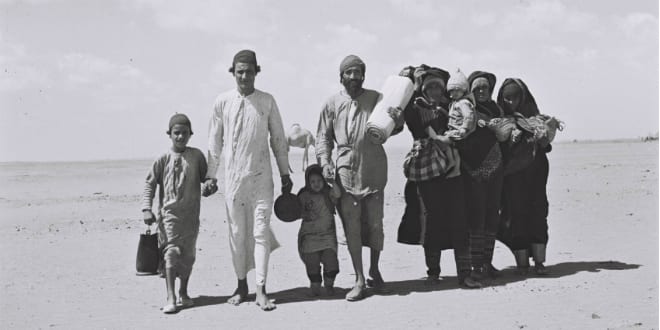 Israeli Ambassador to the United Nations Danny Danon announced on Tuesday that Israel will submit a resolution to the General Assembly to formally recognize Jewish refugees, or Mizrachi Jews, from Arab countries and Iran.

Danon announced the initiative during a plenary session for the annual meeting that marks 72 years since the historic Nov. 29, 1947 partition plan. The resolution will be brought for a vote in the U.N. General Assembly.

In his speech, he also criticized some member states for their one-sided approach to the Israeli-Palestinian conflict and faulted the international community for not acknowledging Jewish refugees from Middle Eastern countries, in addition to Palestinian refugees.

“There were an estimated 850,000 Jews who were forced out of Arab countries and Iran and became refugees in the 20th century,” said Danon. “These Jews were subject to brutal attacks and harassment and were forced to flee leaving everything behind: in Iraq, Egypt, Morocco, Iran and many other countries. And still, we don’t hear the international community speak of them when they discuss the refugees of the conflict, perhaps because it doesn’t serve the Palestinian narrative.”

November 30 was chosen by the Israeli government as the memorial day commemorating the tragedy of the Jews forced to leave the Arab countries and Iran where they had lived for millennia, solely because of their Jewish identity. ​The plight of the Jewish refugees from Arab lands is rarely spoken of, possibly because it offsets the plight of the Palestinian refugees from Israel. In January, the Israeli government decided to demand compensation totaling a reported $250 billion from seven Arab countries and Iran for property and assets left behind by Jews who were forced to flee those countries following the establishment of the State of Israel. Of the 850,000 Jews who fled Arab countries, approximately 800,000 settled in Israel. The descendants of these immigrants from Arab countries now account for a majority of Israel’s Jewish population. Only 8,500 Jews remain in these Arab countries.

The total area of land confiscated from Jews in Arab countries amounts to nearly 40,000 square miles — about five times the size of Israel’s entire landmass.

This claim by the Israeli government offsets a claim made by the Palestinian Authority ten years ago which sought over $100 billion in compensation from Israel for assets left behind by Arab residents of what is today Israel.

It is important to note that the UN Human Rights Council defines a refugee as a person who is forced to flee their country due to violence or oppression. The United Nations Relief and Works Agency for Palestine Refugees in the Near East (UNRWA) was created specifically and solely to aid Palestinians. The UNRWA definition of a refugee includes descendants of Palestinian refugees. In 1947, approximately 711,000 Palestinians fled Israel and an additional 300,000 fled in 1967. Based on their unique definition, the UNRWA claims that there are currently close to five million Palestinian refugees. In point of fact, there are currently approximately 30,000 Palestinians who were actual refugees in 1947.