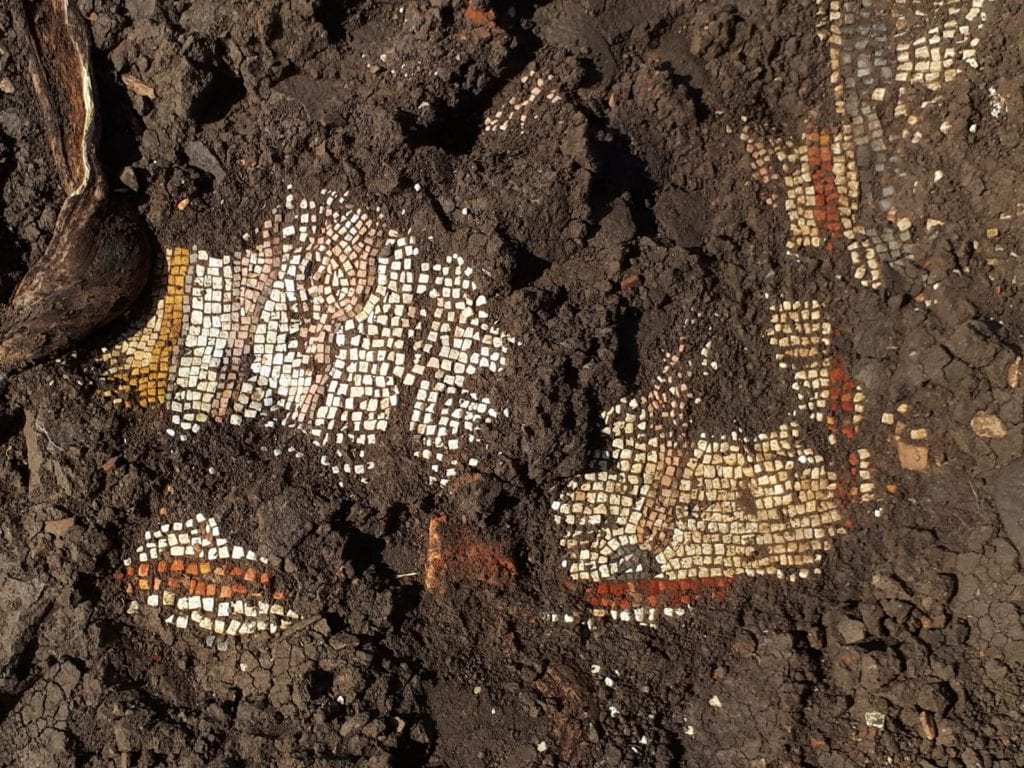 A rare mosaic floor with a design of the footprints of bird and mammals has been discovered in the excavation of a synagogue in the ancient settlement of Majdulia on the Golan Heights.  The settlement was apparently established at the end of the Second Temple period, in the first century in the Common Era, but it disappeared at the end of the Third Century CE.

The unusual floor design indicates the changes in the Jewish community during the Roman period, “This is the ancient testimony of a colorful and decorated mosaic in a Golan synagogue and dates back to a period about which we have almost no knowledge of the Jewish community in the Golan in particular and few remnants of synagogues in Israel in general,” said Dr. Mechael Osband CORRECT SPELLING of the University of Haifa’s Zinman Institute of Archeology who led the excavations.

Osband’s team has been excavating in the ancient settlement of Majdulia next to the settlement of Natur, a moshav made up of both religious and secular families that is located adjacent to the Samakh Stream and only 10 kilometers from Lake Kinneret.

A few years ago, the researchers found the remains of a synagogue in a place with a rectangular floor plan measuring 13 x 23 meters. Finding the remains of the synagogue was of great importance, as until a few years ago, historians and archeologists believed that the Jewish settlement in the Golan ceased to exist after the Great Revolt with the destruction of Gamla in 67 CE. The synagogue findings, along with similar evidence from other excavations and surveys in recent years, bolstered the understanding that the Jewish community continued to exist. The last excavation season in the synagogue added new and important understandings of the development of Jewish life over the years and life in the countryside during the Roman period in the Golan.

“This is the earliest discovery of a colorful and decorated mosaic in a Golan synagogue, dating back to the third century CE,” said Osband. “We see an interesting combination of the continued tradition of synagogues from the Second Temple period, such as the seating arrangement and the relative lack of architectural decorations, with new added elements that would later become common in synagogues over time, such as a colorful mosaic that features animals.”

Inside the synagogue, researchers were able to uncover colored mosaic sections. The building was exposed with the help of Shalom Ariel who joined the project as part of his graduate studies in Eretz Israel studies at the Kinneret College, and without his dedication and patience it is doubtful whether the building’s investigation in general and the mosaic in particular could be promoted to their present state, Osband added.

The fact that the settlement was abandoned in the late Third Century made it possible to more accurately date the findings. Only the lower tiers of the synagogue survived, and the mosaic in a few sections alone remained, apparently due to deliberate dismantling of the structure over the years.

The mosaic sections that were exposed indicate that the lounge (side halls) floor was colorful and characterized by the richness of geometric shapes. However, the mosaic in the main hall turned out to be more complex and elaborate, and despite its poor state of preservation, the legs of birds and of a number of unidentified animals can still be seen.

The researchers say that the mosaic’s rich design may prove that the synagogue was changed at some point in time into a place of learning and prayer for the whole Jewish community. “We know that synagogues at the end of the Second Temple period were mainly used as a place of Torah study. Synagogues at the end of the Roman period and especially in the Byzantine period are used as a place for prayer, a kind of ‘little temple’ – so they are much more luxurious. It is not uncommon to include fancy mosaics. They are some of the earliest found so far to indicate that as early as the third century the synagogues are beginning to undergo this important change of consciousness,” Osband concluded.