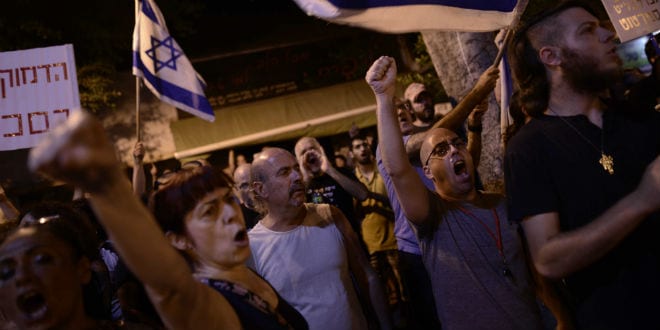 State prosecutors came one step closer to removing Israel’s longest-serving prime minister from office this past week, when Attorney General Avichai Mandelblit announced that he would indeed indict Benjamin Netanyahu for breach of trust in three separate cases, as well on a felony charge of bribery in one of the cases.

In making his announcement, Mandelblit said that “law enforcement is not a choice. It is not a matter of right or left. It’s not a matter of politics.” He also stated that “the public interest requires that we live in a country where no one is above the law.” Yet it has been clear since the moment the investigations began that prosecutors had their sights on removing Netanyahu from office and would stretch the limits of the law to make sure his conduct fell on the wrong side.

The three cases against Netanyahu—Case 1000, Case 2000 and Case 4000—are particularly suspect. No official complaints were filed in the matters. Rather, evidence was collected in connect-the-dots fishing expeditions that first targeted Netanyahu’s advisers.

The past few weeks have also seen revelations of questionable prosecutorial practices that were used to pressure Nir Hefetz, a top Netanyahu aide, into becoming a state witness in Case 4000. Much of the evidence in Cases 1000 and 2000 was collected from now state witness Ari Harow, Netanyahu’s former chief of staff, who was himself initially investigated over his divestment from his own company prior to working for Netanyahu.

A former Netanyahu adviser told JNS on condition of anonymity that this is standard operating procedure. If Israel’s police and prosecution “want to get someone, they start investigating the people in their inner circle and then work their way further out until they find something,” said the adviser.

Then the pressure starts.

“Once they find something, they will make your life hell—sometimes, for years—until you become a state witness,” the adviser said.

Among the techniques employed by the prosecution to this end, said the adviser, are putting a lien on a person’s assets, and freezing their bank account and credit cards so that they cannot conduct even the most basic transactions.

The target of such an investigation may turn state’s witness just to be able to return to living a normal life, said the adviser. The decision may have nothing to do with their belief that the prosecution’s real target—in this case, Netanyahu—has committed any crime.

The adviser pointed to lingering corruption charges against former Defense Minister and Foreign Minister Avigdor Lieberman, saying, “They had the case opened on him for 11 years until they finally had no choice but to drop it.”

That case, said the adviser, was the exception that proves the rule.

“When they want you, they’ll keep coming after you until they find something.”

Throughout the investigations, carefully edited pieces of evidence were illegally leaked to the press. The leaks represent part of an extended campaign to sour the public and the rest of Israel’s political echelon on Netanyahu’s continued leadership. The irony is that in two of the cases, Netanyahu is accused of illegally using the power of his office to affect coverage of him in the media.

In charging the prime minister, the prosecution is charting new territory for Israeli law, as well as for international norms. Nowhere does Israeli law set any boundaries on relationships between the media and politicians. Furthermore, no democratic country with a free press has ever prosecuted a state leader for accepting positive media coverage as a bribe, even when such coverage came in direct exchange for legislation.

A team of high-profile lawyers, led by Nathan Lewin and including Richard Heideman, Joseph Tipograph, Avi Bell and Alan Dershowitz, argued before Mandelblit during pre-indictment hearings last month that charging Netanyahu in the cases involving the media was unprecedented, and represented a “dangerous threat” to Israel’s democracy and free press.

The arguments had little impact. When Mandelblit finally announced his decision to file formal indictments, it was simply the expected continuation of a process aimed at removing Netanyahu from office that has been directly affecting Israel’s political system for the past two years.

Had the indictments not loomed over Netanyahu’s head, it is unlikely that the prime minister would have called early elections just over one year ago. Elections had originally been scheduled for the first week of November. During the second and soon-to-be third election cycles this year, the campaigns centered on a single issue: Netanyahu’s fitness to continue serving in office.

Mandelblit’s announcement came the day after Blue and White Party leader Benny Gantz returned his mandate to form a government to Israeli President Reuven Rivlin and the start of a 21-day period in which any Knesset member, including Netanyahu, can attempt to form a government. That’s when State Prosecutor Shai Nitzan came forward with a new legal opinion that confirms the intent behind the decision to charge Netanyahu is removing him from office.

The Globes website, citing unnamed officials, reported that Nitzan argued during internal Justice Ministry discussions that Netanyahu may not legally be tasked with forming a government while under indictment. Globes noted that Mandelblit similarly believes that Netanyahu faces “significant legal difficulties” in forming a new government.

Their arguments stand in contradiction to current Israeli law that does not require a prime minister to resign if indicted. Though it is also currently being reported that since the law permitting an indicted prime minister to remain in his post “has not yet been tested,” it is likely to be debated in court. Meaning, if the law does not suit the objective, it can be challenged by the prosecution and overturned by the courts.

In the wake of Mandelblit’s announcement, Netanyahu called for the “investigators to be investigated” and continues to cling to power, even as his grip slips and Israel runs headfirst towards an unprecedented third election.

He may yet figure out a way to maneuver himself back firmly into the chair he has occupied for the past 10 consecutive years (and for 13 years in total). Even if he ultimately fails, it may take several months for the prosecution to reach its goal of finally removing him from office. What is certain is that unprecedented and highly questionable legal attacks on a sitting prime minister have placed Israel in a thorny situation—one that may stay prickly for years to come.