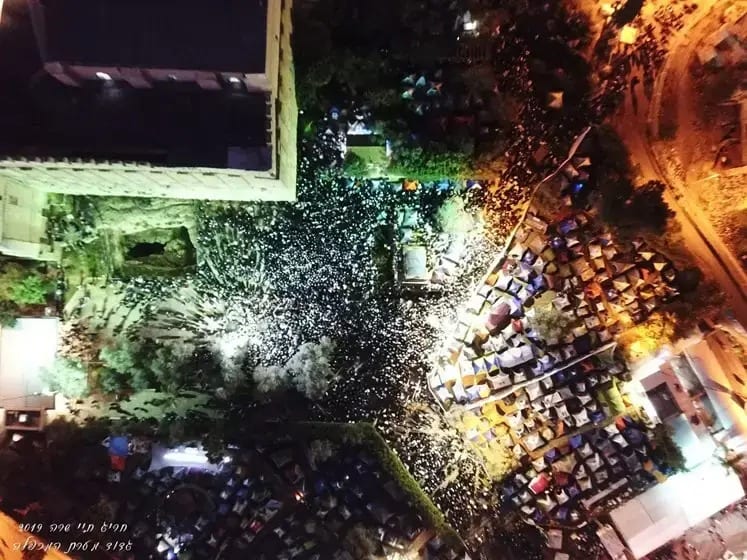 Tens of thousands of Jews from around the world made the pilgrimage to the city of Hebron over the Sabbath to pay homage to the Jewish matriarch Sarah, whose death led to the purchase of a burial plot for her in Hebron, a transaction which was recounted in the weekly Torah portion read during the weekend. An estimated 40-50,000 Jews converged in Hebron and its adjacent sister city, Kiryat Arba, with festivities centering around the Tomb of the Patriarchs and Matriarchs, the large edifice built 2,000 years ago by King Herod atop the burial cave, in which Abraham was also buried, followed by the biblical Isaac and Rebecca, and Jacob and Leah.

Rachel, Jacob’s second wife, was not buried in Hebron, but in Bethlehem, where her tomb remains a frequently visited holy site.

Just before candle-lighting and the beginning of Shabbat, Hebron spokesman Yishai Fleisher tweeted a picture of Jews holding a large banner thanking US President Donald Trump for his support for Jewish communities in Judea and Samaria such as Hebron, which the US administration dubbed “not illegal” in an announcement made last week.

The tweet was reposted by famed American conservative commentator Ben Shapiro, gaining over 2,000 Likes and Retweets.

The 1,000 Israelis living in Hebron are currently allowed access to just 3 percent of the city. Their portion contains the Tomb of the Patriarchs and Matriarchs, but is highly regulated by the Israeli government, largely due to ongoing accusations in the Muslim world and in the international community that Israel controls the site illegitimately. These Jews have paid a heavy price in blood at the hands of Islamist terrorists.

Despite the extensive Jewish history at the location, UNESCO declared the Tomb of the Patriarchs and Matriarchs a Palestinian World Heritage Site in 2017, effectively ignoring all historical and Biblical accounts of a Jewish connection to the first site acquired by Abraham in the Promised Land.

Due to the small number of Jewish homes and institutions available to house guests, hundreds of visitors arrived with tents, trailers, and truck beds, setting up a makeshift camp in pre-designated areas and cramming into any available unused corner.

However, the majority of pilgrims were welcomed in nearby Kiryat Arba, which is home to 9,000 people.  The visitors were able to walk to Hebron, with the help of an increased number of IDF forces on hand to oversee the safety of the event.

Benefactors of Hebron were treated to meals by the Hebron Fund, and guests were able to buy tickets to massive 3,000-person meals in huge white tents hung with large chandeliers erected by Rabbi Danny Cohen of Chabad of Hebron. Baruch Marzel also distributed hundreds of meals and lined up tables along the main street in front of the tomb with free pastries, kugel, and drinks for worshippers.

Jews and Muslims share control over the Tomb of the Patriarchs and Matriarchs throughout the year, with the groups entering through separate entrances and praying in separate areas.  However, for 10 days a year, each group receives total control of the entire site.

During Chayei Sarah, the Isaac and Rebecca hall was opened to the visitors, who crammed into the large hall, lining up to breathe air and whisper a prayer in a small, ornate hall which leads down into the cave.

“I think of it as Woodstock meets the Bible,” Fleisher said. “On the one hand, it’s an incredible festival that includes spirituality, lectures, Friday and Saturday night music, but at the same time, the main event is the reading of the Torah portion which describes the purchase of this plot of land by Abraham.”

“There is nothing like reading that ancient scroll in that ancient spot together with the children of that place, the Jewish people.”

“While Jerusalem is a place we try to earn through our actions and our merit now and in the future, MK Smotrich told guests of the Hebron Fund,  “Hebron is a place where the Jewish people have an unbreakable link with God, with no effort and regardless of the future, due to the greatness of the actions of those who lived in the past.”