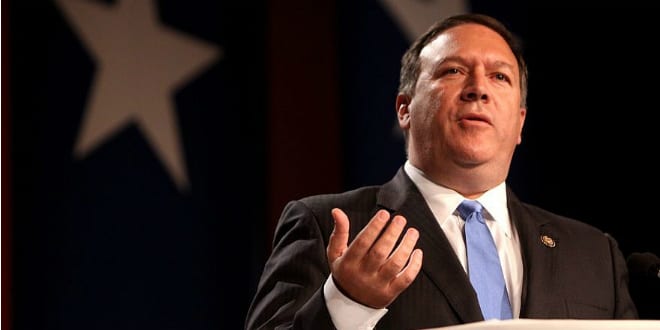 U.S. Secretary of State Mike Pompeo made two brief, basic points in his declaration Monday on Israeli communities in Judea and Samaria. He said that those communities are not illegal. And he said that far from facilitating peace, delegitimization of those communities has harmed prospects for peace between Israel and the Palestinians.

Israelis were all but unanimous in their praise for Pompeo for speaking these simple truths. From Prime Minister Benjamin Netanyahu to opposition leader Benny Gantz there was an immediate consensus supporting the Trump administration’s bold move to reject Barack Obama’s truth-impaired, hostile position on those communities and the EU’s concomitant absurd and bigoted legal double standard for the Jewish state and its citizens.

EU foreign policy chief Federica Mogherini issued a condemnatory press release. She and her French, Belgian and German colleagues tried to get a consensual condemnation from all EU member states, but pro-Israel Hungary blocked them.

Democratic presidential candidates lined up to condemn Pompeo’s remarks, together with their radical counterparts in Congress. Elizabeth Warren promised to revoke Pompeo’s position if elected president.

The reason they were angry is because with his simple, brief statement, Pompeo took away their favorite fig leaf for hiding their hatred for Israel.

For the Europeans and the American Left, the term “settlement” does not connote an Israeli town on the map. For them, “settlement” is a password that opens Pandora’s Box of anti-Semitism. When they say “settlement,” they mean, “Zionism is racism,” or “Israel is an Apartheid state,” or “BDS.”

The term “settlement” serves for them as a green light for rejecting Israel’s right to exist, for denying self-determination to the Jewish people, for embracing anti-Semitism.

With his statement on Monday, Pompeo took their buzzword away.

Now they can’t say that they aren’t anti-Israel, they simply believe in the importance of upholding international law because the position of the U.S. government is that “settlements” do not violate international law.

In short, those most directly harmed by Pompeo’s statement are those that use the term “settlements” as the key justification for their anti-Semitic campaigns in the West, and particularly in America.

In light of this, the people most harmed by these anti-Semitic forces, that, is, American Jews, could have been expected to be the greatest supporters of Pompeo’s statement.

But that isn’t what happened. While Israelis across the political spectrum cheered Pompeo for his declaration, the American Jewish community – as represented by its major organizations – had three main responses to what Pompeo said.

The first came from the anti-Zionist or post-Zionist Jewish left. This group is led most notably J Street and the Union of Reform Judaism. Both viciously condemned Pompeo’s statement.

The Reform movement stunned Israelis when its leader Rabbi Rick Jacobs called on President Donald Trump to rescind Pompeo’s statement and reinstate the Obama administration’s policy of viewing Israeli communities in Judea and Samaria as the great obstacle to peace.

On the other side of the spectrum, groups with traditional Zionist positions were deeply supportive of Pompeo’s statement. The Zionist Organization of America, (ZOA) was ecstatic. It specifically noted the that the Trump administration’s move, “strikes a blow at the hateful, anti-Israel BDS, (boycott, divestment and sanctions) movement, which relies on false claims that Jews are ‘illegal occupiers’ of the Jewish homeland.”

The ZOA also condemned the Reform movement for calling for the administration to rescind the policy.

Likewise, Christians United for Israel, (CUFI) and other leading Christian Zionist groups and national leaders were thrilled by Pompeo’s statement. One evangelical leader enthused that with the move, Trump secured “100 percent” of his evangelical Christian base.

Between the post-Zionists and the Zionists are the bulk of what are normally viewed as mainstream Jewish American groups. These include the American Jewish Committee, (AJC), the Anti-Defamation League, (ADL), the American Israel Public Affairs Committee, (AIPAC), the Conference of Presidents of Major American Jewish Organizations and the Jewish Federations of North America. Until a decade or so ago, all of these groups could have been expected to respond as the ZOA and CUFI did. But alas, much has changed in the past ten years.

The reactions of these organizations were disappointing, to say the least. The Conference of Presidents refused to release any statement in response to Pompeo’s declaration. The Jewish Federations of North America were similarly silent.

Statements by the AJC and the ADL ignored the substance of Pompeo’s declaration. They failed to mention fact that he repudiated the Obama administration’s obsessive and false claim that Israeli communities are an obstacle to peace, despite the fact that this claim has fueled the work of anti-Semites as they spread their hatred of Jews on college campuses across America. The AJC and ADL also didn’t thank Pompeo for saying what he said.

Instead, their statements effectively embraced Obama’s discriminatory and false position on these Israeli communities. The ADL said (irrelevantly) that it supports the establishment of a Palestinian state. The AJC said it opposes construction in settlements located beyond the large settlement blocs – as if this were at all relevant to Pompeo’s statement.

In other words, both groups pretended that what he was saying was directed at Israeli policy, rather than the campaigns by the EU and the American left to demonize and delegitimize Israel and its Jewish supporters in the West.

AIPAC’s response to Pompeo’s statement was arguably even more shocking. Pompeo’s statement rejected fifty years of anti-Israel rhetoric that cultivated and accelerated the rise of anti-Semitism on the American left and gave the EU a fig leaf to excuse its anti-Semitic policies. As the pro-Israel lobby in Washington, AIPAC should have been the first to thank Pompeo, particularly in light of the wall to wall support his statement elicited in Israel.

But AIPAC did not thank Pompeo.

AIPAC’s only response to the most significant shift in U.S. Israel policy in since the Six Day War was a post on its twitter feed which read, “AIPAC does not take a position on settlements. We believe settlements should be an issue for direct negotiations between the parties, not something determined by international bodies. The Palestinians must stop their boycott of US and Israeli officials and return to direct talks.”

Aside from ignoring Pompeo’s statement, and so erasing the context of its remark, the most bizarre aspect of AIPAC’s tweet is the position it expressed.

The war against “settlements” is the means through which Israel’s detractors seek to delegitimize Israel’s very existence and demonize AIPAC and its members as disloyal to America for their “crime” of caring about Israel.

And AIPAC doesn’t have a position on the issue? Can it really not choose a side in the battle between the Israeli consensus and IfNotNow?

What purpose does no-position-on-settlements-AIPAC serve today? What is it there to do?

How are we to understand the tepid-to-non-existent responses of these major Jewish groups to the most supportive statement made by a sitting Secretary of State in history? What stands behind their refusal to respond positively to a statement that undermines the basis for the most politically powerful and fastest growing form of anti-Jewish bigotry in America?

It would seem that there is one explanation. It is called the Democratic Party, circa 2019.

Like most of their members, the leaders of these Jewish organizations groups lean Democrat. Their decision to remain in a party that becomes more hostile to Israel and Jewish interests with every passing week carries certain obligations. Quite simply, there is little room in the Democratic party today for fulsome support for Israel and rejection of leftist anti-Semitism. The party they won’t leave would in all likelihood leave them if these Jewish groups were to thank Pompeo for rejecting the delegitimization of “settlements” – again, the buzzword used by the likes of John Kerry, Rashida Tlaib, Bernie Sanders, Elizabeth Warren, Joe Biden and Alexandra Ocasio Cortez to attack Israel and its supporters.

Then there is the issue of the identity of the man who made the statement on Monday.

Pompeo is not merely a Republican. He is President Trump’s Secretary of State. And President Trump happens to be the most pro-Israel president in U.S. history. But in today’s poisonous political climate, no Democrat can say anything positive about Trump and his administration.

And so, AIPAC’s statement never mentioned his name. The AJC and ADL wouldn’t say anything positive about Pompeo or his extraordinary statement. And all three of them – together with the silent Conference of Presidents and Jewish Federations of North America – ignored the fact that that the consensus view of Israelis is that Pompeo’s statement was a great act of friendship towards Israel and the Jewish people.

For Israel, the lesson from all of this is a sad one. Mainstream American Jewish groups and their leaders are no longer dependable allies and partners. Until ten years ago, these groups and leaders recognized that their freedom and civil rights as Jewish Americans was tied to American support for Israel. Now, as that support for Israel in their political home is collapsing, they won’t stand up for their rights in opposition to their party and so they are unable to stand up for Israel or respect the consensus opinion of Israelis.

To date, regardless of the party in power, Israel’s governments have gone out of their way to support for these major Jewish organizations. Prime ministers and cabinet ministers have made a point of flying to Washington to participate in the annual AIPAC conference, for instance.

The time has come to end this tradition.

Israel should help smaller Zionist groups grow and help larger organizations expand their reach. To this end, Israel would be better served if the Prime Minister skips the AIPAC conference in favor of the CUFI conference in the coming years.

Old habits die hard. But the cold responses these major Jewish groups issued in the face of the most significant pro-Israel position the Trump administration has adopted to date show that they have already changed their old habits. Israel needs to recognize what they have done and act accordingly.