Israel’s March Elections Fall on Purim: “The City of Shushan Was Dumbfounded”

Home » Israel’s March Elections Fall on Purim: “The City of Shushan Was Dumbfounded” 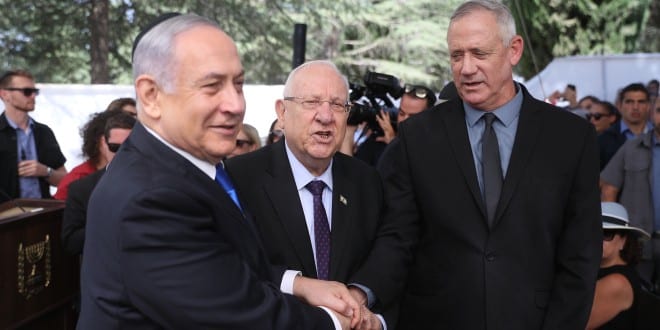 Once again, Israel is faced with a political impasse that will send Israelis to the ballot boxes. But this time, the timing of the elections, falling on Purim, points at a divine plan hidden behind political events.

Avigdor Liberman announced last Wednesday that he would only support a national unity government. Without the eight seats of his Yisrael Beiteinu party, Netanyahu cannot form a right-wing coalition nor can Benny Gantz form a left-wing coalition. Both have already tried and failed to cobble together coalitions. Neither is willing to make the compromises necessary to form a unity government and both have rejected the option of rotation of the position of prime minister.

According to Israeli election law, the Knesset will have 21 days, until December 11 at midnight, to find a new candidate for prime minister but at this point, it seems inevitable that Israeli citizens will be heading to the ballot boxes for the third time.

Should the Knesset fail to find a candidate for prime minister by the end of December 11, the law says an election should be held on the last Tuesday within 90 days. The 90th day after the Knesset’s deadline is Tuesday, March 10, which is the holiday of Purim.

Since Purim is a religious and national holiday, it is unlikely that the elections will be held on that day. Central Election Committee Director-General Orly Ades told The Jerusalem Post that the Knesset can vote to postpone the election by up to 10 days, which means March 17 is the likely date for Israel’s third election within one year.

In June, Breaking Israel News reported on a 40-year-old prophecy in the name of Rabbi Yitzchak Kaduri that predicted the Messiah would be revealed after elections failed to produce a government. The second round of elections is unprecedented in Israeli history so the appearance of this phenomenon was quite shocking. Other sources for the prophetic implications of this political development began to surface and are well-worth revisiting.

But the timing of the next round of elections requires a new look at the implications.

Purim is the Holiday of Anti-Socialism

Moshe Feiglin, head of the libertarian Zehut party, made a video last Purim in which he noted the relevance of the Book of Esther to modern political policy.

“The Book of Esther begins with an amazing feast served on the vessels from the Temple that lasts for 180 days. Everything is free and everyone is invited. The government pays for everything. Everyone is ‘equal’. It is totally socialism. But how does it end?”

Feiglin cites the final chapter of the Book of Esther.

King Ahasuerus imposed tribute [taxes] on the mainland and the islands. Esther 10:1

“This is the Bible teaching us socialism; ‘nyet’ [no], capitalism; yes,” Feiglin said. “Don’t give me from your feast and don’t take heavy taxes to pay for it. Leave me alone with my money in my pocket.”

Homosexuality: the 50th Gate of Impurity Before the Final Redemption

Yuval Ovadia, whose films on the end-of-days have garnered hundreds of thousands of views, predicted over one month ago that no elections would succeed.

“I am not a prophet or the son of a prophet,” Ovadiah said. Elections are held but, what will be, has already been decided in heaven.”

Ovadiah cited the Talmud (Yoma 38b) which said, “One kingdom does not interfere with the other2 even to the extent of one hair’s breadth.” He also cited the Talmud which stated  a section of the Talmud that states, “The Davidic Dynasty will only be established after the ‘demeaning’ government ends.”

“There are several ways that could come about,” Ovadiah said. “God forbid, this could happen if a foreign government comes and conquers Israel, deposing the Knesset and the Israeli government. This could also happen through natural catastrophes that would lead to the government falling apart.”

“Or it could be that the Zionist government will fall apart all by itself,” Ovadiah said. “Then the Kingdom of the Messiah will simply arrive without any fanfare and almost without any effort.”

“It seems to me that the third option is what will happen,” Ovadiah said. “We have seen over the last hundred years that God’s intention is to build up Israel and not destroy it. We saw that even after the Holocaust, God built up Israel against all odds. This is clearly his plan in everything he does here.”

Ovadiah emphasized that this was happening now, citing as his source the Tikkunei Zohar which stated, “In the final redemption, the government of the mixed multitude will rule over Israel 70 years.”

Ovadiah noted that the redemption will begin in Israel but will spread out to the entire world.

“The problems we are seeing in the Israeli government are going to spread as well,” Ovadiah said. “In the U.S., this has already started.”

“Since the first government in Israel was established until today, exactly 70 years have passed,” Ovadiah said. “These are the 70 years that Heaven gave us to suffer under the mixed multitude and now it is over.”

Ovadia also cited a cause for the secular government to fall.

“This year, there have been 50 parades for Homosexual ‘pride’,” he noted. “In the holy land!!?? There is no other nation that would do such a thing. This is equivalent to the 50 gates of impurity taught about in Jewish mysticism. Just as Israel had to sink to the lowest level of impurity in Egypt before ascending to the heights at Mount Sinai, so too this is happening today before the final redemption.”

“Conversely, we see in recent events around the world that God is allowing the evil people and the evil governments to prepare their own graves,” Ovadiah said. “People should not worry or fight or even get angry. This is the time to have total faith in God.”

Purim: The Redemption Hidden in Politics

Rabbi Yoel Schwartz, the head of the Sanhedrin’s Noahide court, noted that the connection between the Israeli elections and the holiday of Purim is significant but like most things concerning the holiday, the true significance will only be revealed after-the-fact.

“Esther comes from the Hebrew word for ‘hidden’,” Rabbi Schwartz said to Breaking Israel News. “It is essentially a book about politics that does not mention the name of God.”

Like channeled water is the mind of the king in Hashem‘s hand; He directs it to whatever He wishes. Proverbs 21:1

The rabbi cited the section of the Talmud that states, “The Davidic Dynasty will only be established after the ‘demeaning’ government ends.”

“In Jewish law, three times establishes a chazakah (legal status),” Rabb Schwartz said. “It was clear from the first election that a government would not be established. The third election will firmly establish that this form of government cannot work and Israel needs a return of the Kingship of David.”

Purim: Political Uncertainty as the Gateway to Redemption

Rabbi Yosef Berger, the rabbi of King David’s Tomb on Mount Zion, notes the significance of the Israeli election crisis taking place while the U.S. is going through impeachment hearings.

Rabbi Berger noted that the elections on Purim indicate that times of political uncertainty as precisely the precursor to salvation, as described in the Book of Esther.

The couriers went out posthaste on the royal mission, and the decree was proclaimed in the fortress Shushan. The king and Haman sat down to feast, but the city of Shushan was dumbfounded. Esther 3:15

“What we are seeing is that all the ‘false gods’ that we believed in, whether it was politics or science or money, they are all falling away and shattering to pieces,” Rabbi Berger said. “This is all to show us that they are not what will bring us salvation. The true salvation is so close but we have to have faith ONLY in God.”

The rabbi also noted that the Book of Esther also contained directions on how to serve God in times of political uncertainty.

“If you keep silent in this crisis, relief and deliverance will come to the Yehudim from another quarter, while you and your father’s house will perish. And who knows, perhaps you have attained to royal position for just such a crisis.” Esther 4:14

“Forget about elections, forget about Netanyahu, forget about Trump,” Rabbi Berger said. “They are just tools put in place to be used at the right time. We need to pay attention to the real king, the One who will bring salvation.”