Rabbi Connected to Clintons Lands in Jerusalem to Destroy Israel 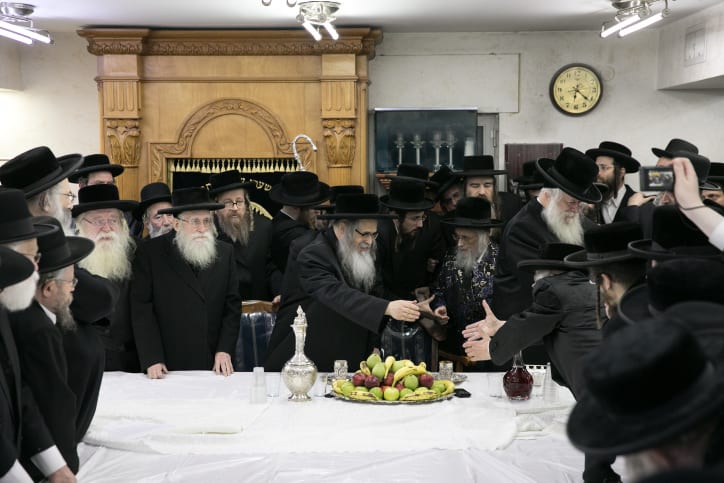 A political insider confided in Breaking Israel News, suggesting a theory to explain the sudden visit by the Satmar Rabbi to Israel. The insider suggested that the Rabbi, who is close to many Arab leaders, intends to facilitate a coalition between the left-wing leader Benny Gantz and the Arab parties in Israel, a role that Haredi political and religious leaders have always taken in Israeli politics.

Israel is currently in a political impasse, facing a third round of elections. After Avigdor Liberman, the secular right-wing head of the Yisrael Beiteinu party abandoned the right-wing coalition headed by Prime Minister Benjamin Netanyahu. After snap elections, Netanyahu was unable to form a coalition since Liberman refused to ally with the ultra-Orthodox parties who had joined the coalition. Netanyahu was again unable to form a coalition after the second round of elections and President Rivlin tasked Benny Gantz, head of the left-wing Blue and White Party, with forming a coalition. As the deadline approaches, Gantz seems unlikely to succeed and extreme solutions from unlikely sources may be his only resource.

Grand Rabbi of Satmar hassidic community Rabbi Zalman Teitelbaum arriving in Israel Tuesday morning for a ten-day visit, during which he will distribute tens of millions of dollars to his hassidim and other communities and institutions that don’t take money from the state pic.twitter.com/9KQFrXKUcc

And one Israeli-American who is active behind-the-scenes in Israeli politics sees the visit by the Satmar Rabbi as just such an extreme solution that bodes ill for Netanyahu, Israeli security, and Netanyahu’s ally, President Trump.

A bit of context is required in order to understand the situation. Satmar is one of the largest Hasidic groups with communities around the world. The estimated number of Satmar Jews ranges between 65,000 and 75,000 but their global affiliations and influence on other Hasidic groups inflate their influence far beyond those numbers. The followers are highly devoted and rarely stray outside the guidelines established by two brothers who are the sole leaders, even in the most insignificant matters.

In a seeming contradiction of their strict observance of Jewish rituals, the sect is virulently anti-Israel, frequently meeting with and protesting alongside Arabs bent on the destruction of Israel. They ostensibly based their anti-Israel stance on an obscure reference in the Talmud to the “Three Oaths” prohibiting mass immigration to Israel. The former Satmar Rebbe (spiritual leader), Rabbi Yoel Teitelbaum, wrote in his book “Vayoel Moshe” in 1961 that God brought about the Holocaust because the secular Zionist movement violated the oath by forcefully resettling the Land of Israel en masse. This precept outlined by Rabbi Teitelbaum is one of the guiding principals of the sect to this day.

Critics of the Satmar’s anti-Israel stance note that the many academic objections to the three oaths that have led it to be rejected by all Jewish scholars outside of Satmar. In addition, the Three Oaths does not allow for allying with enemies of the Jews.

The political insider who spoke to Breaking Israel News on the condition of anonymity lived for several years as part of the Satmar community, though he has since left. For the purposes of this article, he will be referred to as “Moshe.”

Moshe noted that since the inception of Israel, the Ultra-Orthodox allied with the secular left-wing. The first Haredi party in Israel, Agudat Israel, was founded in 1912 and, somewhat ironically, opposed the formation of the State of Israel. Despite this objection, they joined a left-wing secular coalition while voicing opposition to Zionism. The U.S. based Satmar Haredim continue to criticize the Israeli Haredim for participating in Israeli politics.

This alliance continued despite the social enmity based on vastly divergent social values that existed between the secular and the Haredim. This was true until Prime Minister Netanyahu successfully incorporated them into his first government. Though most political pundits claim this was an alliance of convenience with the secular left-wing buying the Haredi silence in order to advance their agenda, Moshe believes this alliance goes much deeper and is actually based on mutual values.

“The secular mob hates Haredim,” Moshe said. “But every disastrous peace agreement was the result of the Haredi parties and the left-wing parties uniting.”

“Satmar hate Zionists but the left-wing in Israel isn’t Zionist anymore,” Moshe explained. “They demonized secular Zionism for being secular. But the real Zionists in Israel today are the settlers and even though the settlers are religious, the Satmar really hate them.”

This left-wing secular/Satmar ideological alliance took on a bizarre form in July when former Israeli Prime Minister Ehud Barak announced his new political party, Democratic Israel. His interview on Reshet Bet Radio sounded more like a Torah lesson given by the Satmar rabbi as the non-religious (arguable anti-religious) politician gave an in-depth explanation of the aforementioned Three Oaths in order to demonize the religious right-wing.

Moshe noted that when Satmars see religious settlers, they are faced with an existential dilemma.

“They see settlers in Israel and realize that these are the real Jews and they can’t accept this,” Moshe said. “The Satmar and the left-wing secular Israelis have this hatred of settlers in common.”

Moshe noted another common agenda the Satmar have with the secular left.

“Settlers are the force behind the movement to bring the Third Temple and to settle greater Israel,” Moshe said. “The left and the Satmar both see those agendas as the biggest threats to the comfortable status quo.”

Moshe noted that as soon as Israel conquered the Temple Mount in 1967, the secular left demanded Moshe Dayan turn it over to Jordan. Some religious Zionists, most notably IDF Chief Rabbi Shlomo Goren, objected. But the ultra-Orthodox leaders remained silent, giving their tacit approval. To this day, most ultra-Orthodox rabbis instruct their followers to refrain from ascending the Temple Mount.

Sin of the Spies: Do They Still Worship the God of Israel?

The anti-Israel attitude of the Satmar and their allies can take truly bizarre manifestations that seem to fall outside of Judaism. Last week, while rockets from Gaza rained down on Israel, one of the heads of the Neturei Karta (a sect Moshe described as the “Satmar shock troops), Yisroel Meir Hirsch, published a video that was picked up by Palestinian media. In the video, Hitsch said that the entire land of Israel belongs solely to the Palestinians and that he wishes the speedy “nullification of the Zionist-terrorist-regime. The lands, which are all Palestinian, should be returned to the nation of Palestine.” Towards the end of the video, he said: “The world should serve Allah under one name. Inshallah (Allah willing).”

It is interesting to note the similarity between the stance of the Satmars and the episode of the spies in the Exodus from Egypt.  After the Hebrews committed the sin of idolatry with the Golden Calf,  God forgave them and they were still on track to go directly to Israel. But after the sin of the spies, essentially speaking slander against the land of Israel and advising the Hebrews not to return to Israel, the entire congregation of Israel was judged with death. The Hebrews wandered for 40 years until all but Joshua and Caleb died.

According to Midrash (homiletic teaching), the spies were the elite Torah scholars. They reasoned that it would be preferable to remain in exile where they could study Torah constantly and be sustained by the manna. They reasoned that this was preferable to actually toiling in the and of Israel which would detract from their study. On the basis of this decision, they were punished.

The Satmar Rabbi, Grand Rabbi Aaron Teitelbaum, arrived in Israel on Tuesday for a ten-day visit. On his way to Israel, he made a quick stopover in his private jet in London. The timing of the visit is unusual, coming at a time when there are no holidays or special occasions. The Rabbi announced his plans to travel 12 days ago, saying, “We are going with the sole purpose of strengthening the holy community there, with their holy institutions, and with no other purpose whatsoever.”

Moshe suspects another reason for the unusual timing of the Satmar Rabbis visit.

“These are the last days that Benny Gantz can form a coalition and become prime minister,” Moshe noted. “The only way he can do this is by bringing the Arab parties into the coalition. If the Satmar rabbi were to meet with the Arab parties and use his connections in the Arab world, including his relationship with Iran, he could convince the Arab parties to sit with Gantz.”

The Satmar ties with the Arab world are not secret. Iranian President Mahmoud Ahmadinejad met with members of Satmar on several occasions, in Iran as well as during his visits to the United Nations in New York.

This Satmar-brokered alliance appears more realistic when taking into account that a branch of Benny Gantz’s family is are members of Satmar. In an interview in the Hebrew-language Kol HaZman, Benny Gantz’s cousin, a Satmar member, stated that the family is aware of his activities but was ashamed of his cousin’s service in the “Zionist army.”

“We heard that he might become Prime Minister,” The Satmar cousin said. “What would we get out of it? Just shame…We hope that he won’t succeed. So he will become the head of all the heretics.”

“The Satmar rabbi could also use his influence with the ultra-Orthodox parties to join a coalition with the secular left and the Arab parties. This wouldn’t be so difficult since they have done so many times in the past.”

“The left-wing secular liberal Jews overwhelmingly voted for Hillary Clinton in 2016,” Moshe noted. “But ALL of the Satmar Hasidim and their allies, totaling several hundred thousand, followed their rebbe’s instructions and voted for Clinton.”

In notices sent out before the 2016 election, the Satmar leader instructed his followers to vote for the Democratic candidate, stating that Clinton “has stood with the Haredi sects for several years, when she was First Lady, New York Senator, and Foreign Minister.”

A meeting with Gantz would also help this U.S. political agenda.

“Gantz as prime minister would be a huge victory for the Democrats,” Moshe said. “Especially if it involves an alliance with the Palestinian anti-Israel parties. All of his moves in Israel have been an undeniable victory for Trump. The left in Israel and the U.S. have demonized Netanyahu. If the Satmar rabbi brought about a Gantz victory, the left would be dancing in the streets of Tel Aviv and Los Angeles.”

“If Gantz becomes prime minister, this would shut off the entire Israeli military and intelligence complex from Trump,” Moshe said.

Moshe noted that outsiders perceive  the Haredim “disconnected from the world politically, economically and socially.”

“Nothing could be further from the truth,” Moshe said. “They dress like they live in the middle-ages but they are 21st century savvy in every aspect. They know how to wheel and deal. And the richest Haredim are the most anti-Israel.”