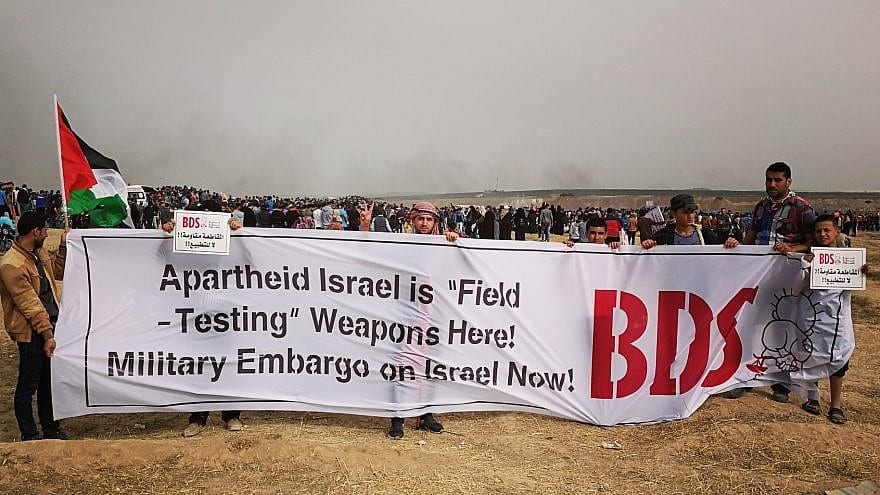 The Keren Kayemeth LeIsrael-Jewish National Fund and American victims of terror have filed an unprecedented lawsuit in Washington, D.C., targeting a U.S. charity tied to the BDS movement that is allegedly funneling donations to Palestinian terror groups.

The lawsuit, Keren Kayemeth LeIsrael-Jewish National Fund, et al vs. Education for Just Peace in the Middle East dba US Campaign for Palestinian Rights, seeks to hold the U.S. Campaign for Palestinian Rights (USCPR), also known as the Education for a Just Peace in the Middle East, liable for conspiring to provide financial aid and other assistance to Palestinian terror groups, such as Hamas, that make up the Boycott National Committee (NBC), which leads the BDS movement.

According to NGO Monitor, US Campaign for Palestinian Rights received $90,000 (under the name of Education for Just Peace in the Middle East) between 2015-2019 from the Rockefeller Brothers Fund.

“With this lawsuit, we’re exposing the link between organizations masquerading as human-rights organizations, but who use donations to advance the campaign of terror against Israel including through BDS, perpetrated by terror organizations like Hamas and supported by U.S. charities,” stated KKL-JNF World chairman Daniel Atar, who has led the initiative to hold the sponsors of terror legally accountable.

According to the complaint, “the USCPR has funneled online donations to the BNC, the umbrella organization that steers and coordinates the global activities of the BDS movement, knowing that in doing so they are supporting and sponsoring known FTOs.”

Additionally, the lawsuit alleges that “USCPR has materially supported the FTOs responsible for incendiary terror balloons and kites launched from Hamas-controlled Gaza into Israel, as well as actively promotes and sponsors the worldwide ‘Stop the JNF Campaign’ specifically designed to harm KKL-JNF.”

Fires in the Negev Desert in Israel as a result of arson terrorism from Palestinians in Gaza, July 2018. Photo by Tom Oren-Denenberg.
In its lawsuit, the KKL-JNF and terror victims say that USCPR has violated the U.S. Anti-Terrorism Act and highlights how the BNC has direct ties to at least five U.S.-designated terrorist groups, including Hamas, Palestinian Islamic Jihad, the Popular Front for the Liberation of Palestine, the Popular Front-General Command and the Palestinian Liberation Front.

“This landmark case exposes a shocking and multi-layered planned conspiracy and campaign aimed at manipulating the public and hiding the key role played by designated Foreign Terror Organizations in efforts which are cynically designed to appear seemingly grassroots and legitimate, while masking an international terror campaign,” said Yifa Segal of the International Legal Forum, who is Of Counsel in the case. “The public, as well as decision-makers worldwide, have the right to the truth and must be made aware of the true identity and agenda of those behind these efforts.”

Emerging evidence suggests that the BDS movement has extensive ties to Palestinian terrorist organizations. By using the “social justice” movement as a veritable human shield for anti-Israel ideology and activism, terror groups are now succeeding in a type of reputational and commercial warfare against Israel.

‘Under the guise of freedom of speech’

In a report last year, Tablet magazine uncovered how the USCPR, an organization that coordinates the efforts of 329 different pro-BDS organizations, helps to facilitate tax-exempt donations “to a Palestinian coalition that includes Hamas, Palestinian Islamic Jihad, the Popular Front for the Liberation of Palestine and other groups the U.S. State Department designates as terror organizations.”

According to the report, the USCPR is the “fiscal sponsor” of the Palestinian BDS National Committee (BNC), a Palestinian-based group that serves as the Palestinian arm of the BDS movement and helps coordinate international BDS efforts. The BNC operates the website Bdsmovement.net that serves to educate and update readers on the BDS movement, as well as allow for American supporters to make tax-deductible donations to the group through the Education for Just Peace in the Middle East, a 501(c)3 charitable organization linked to the USCPR.

This evidence has surfaced in a court case in Arizona earlier this year, where for the first time a U.S. government body has formally acknowledged that the BDS movement aids actors engaged in terror.

“It’s wrong for any U.S. charity to do work masquerading on behalf of human-rights issues, masquerading on behalf of Palestinian rights issues, and to allow its operations to receive and transmit funds to designated foreign terrorist organizations,” Richard Heideman, senior counsel at Heideman Nudelman & Kalik PC, which represents the plaintiffs in the case, told JNS.

“There is no question that the boycott movement, which people have presumed to be a movement that that is standing up for Palestinian rights and against the wrongs of Israel, is utilizing BDS under the guise of freedom of speech. But this is really a boycott as a form of the campaign of terror against Israel.”

“The discovery that the boycott movement began with the designated foreign terrorist organizations is astounding and important,” said Heideman. “The people in the United States who support the boycott movement have to understand that they are supporting terror. It is the same organizations that launch the [Palestinian] ‘March of Return,’ the terror-launchings of kites and balloons [along Israel’s border with Gaza] designed to burn Israel’s forest, nature preserves and the ecological infrastructure, as well as put the people of southern Israel in the Gaza Envelope under fear of their lives and under siege.”

‘The flow of money is fuel for terror’

Indeed, in recent years, Palestinian terrorist groups in the Gaza Strip—namely, Hamas, which has ruled the Gaza Strip since 2007—have taken to launching incendiary devices, such as arson balloons and kites, in addition to rockets and mortar bombs. The incendiary devices, in particular, have wreaked havoc on southern Israel, starting brushfires and causing massive environmental and ecological damage, including to the infrastructure of lands overseen by KKL-JNF.

These acts of terror by fire are a growing threat to the public safety of the community and are responsible for igniting more than 2,155 fires between March 2018 and August 2019, according to research by the Israeli Ministry of Foreign Affairs. More than 8,747 acres of land, including farmland, forests and nature reserves, have burned. The Israeli Ministry of Foreign Affairs estimates the damage done by these attacks equate to $35 million, with $15 million directly caused by the fires.

“It cannot be that Hamas maintains its aggression towards Israel without those who provide material support to Hamas being responsible for paying for its violent acts of terror; not only for attacking Israeli citizens, but for also committing hideous environmental terror against Israel’s nature and wildlife, devastated by these fires,” said Atar.

“During last year’s launchings of the balloon and kite terror, as well as the current launchings of rockets, Hamas and the other Foreign Terror Organizations have proven once again that their attacks upon Israel lack any sense of humanity, both towards human beings, wildlife and natural resources,” he continued.

Heideman added that “for far too long, the people of southern Israel have been traumatized by ongoing terrorist attacks seeking to destroy both their way of life and the surrounding forests and environment.”

“The flow of money is fuel for terror,” he said. “It is essential to take action against U.S. groups that are complicit partners in funding terror that helps enable foreign organizations to relentlessly wage a multifaceted campaign of terror against the citizens and lands of the sovereign State of Israel.”