Major Rabbis Unite in Decisive Call For All Jews To Return From Exile: “It’s Time”

Home » Major Rabbis Unite in Decisive Call For All Jews To Return From Exile: “It’s Time” 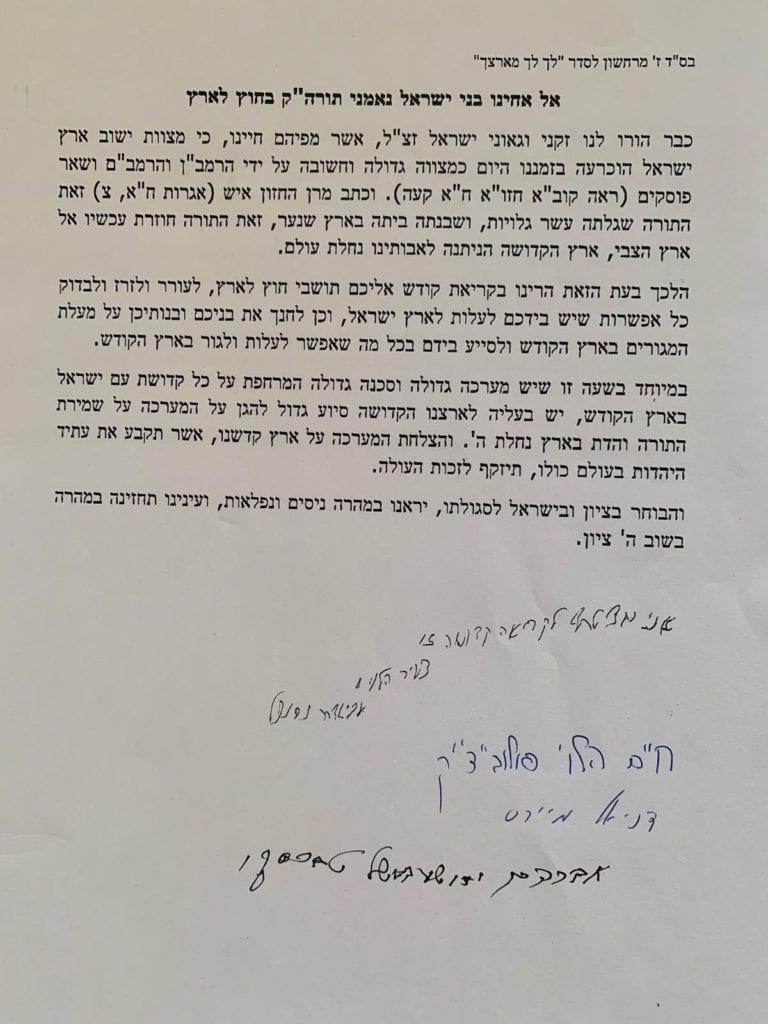 In a rare consensus, an impressive array of some of the most prominent rabbis of this generation came together in a declaration saying that there are no longer any valid excuses: Jews must act on the Torah commandment to move to Israel.

The consensus came as the first stage in an ongoing multi-faceted project initiated by Joshua Wander, a resident of the Mount of Olives. This stage was timed to coincide with the week in which Jews around the world read the section of the Torah in which God tells Abraham to leave his father’s land.

Hashem said to Avram, “Go forth from your native land and from your father’s house to the land that I will show you. Genesis 12:1

“There are many sections of the Torah in which the connection to the land of Israel is not so clear,” Wander told Breaking Isreal News. “But in this section, the relationship between God and the Jewish people begins with God telling Abraham to move to Israel.”

The project, named appropriately enough “Bring Them Home”, will be launched on Thursday with a series of video lectures given by prominent rabbis explaining why the Biblical imperative to move to Israel is in a new, more imperative stage. The five-minute videos will feature Rabbi Zeev Leff, Rabbi Nachman Kahane, Rabbi Chaim Soloveichik, Rabbi Danny Myers,  Rabbi Dr. Abraham Twersky, Rebbetzin Tzipporah Heller, Rabbi Shalom Gold, Rabbi Aryeh Shapira, and Rabbi Mordechai Machlis. All of these rabbis are respected leaders in the Haredi (ultra-Orthodox) movement. Several other rabbis are involved in the project but have not yet prepared video statements for release.

The English-language videos will be posted on the YouTube channel “Bring them Home-Aliyah Now” and their Facebook page.

As part of the initiative, the rabbis signed a joint declaration in Hebrew.

“To our brothers, the Torah faithful Jews living outside of Israel:

The sages of Israel, from whose words we derive life, already taught us that the mitzvah (Torah commandment) to live in Israel was established as one of the greatest of the mitzvoth by Nachmanides, Maimonides, and all the other sages who establish the law…Therefore, at this time, we are sending out a holy proclamation to those who dwell outside of Israel, to wake up and hurry, and to investigate every possible way that is in your ability to come to live in Israel. You must educate your children about the great spiritual level of those who do so and to help them in every way you can to come and dwell in the Holy Land.

The one who chooses Zion and Israel will surely merit to see miracles and wonders, and may our eyes see the return of God to Zion.”

In addition to the rabbis mentioned above, Rabbi Avigdor Neventzal signed the declaration.

“It is a clear consensus across the entire spectrum of Jewish observance here in Israel that it is a mitzvah to move here. It has always been so but it is clear that we are quickly approaching a watershed point in Jewish history when everything concerning the Jewish people will change. The majority of the Jews are in Israel and the redemption is awaiting the return of the last of the exiles.”

“Concerns about making a living or education are no longer as valid so the major obstacles are no longer and Israel has so much more to offer, especially to religious Jews. There is also a sharp rise in anti-Semitism which should be recognized as a serious threat to the Jews outside of Israel.”

“The vast majority of even religious Jews in America do not think about Aliyah anymore,” Wander said. “The rabbis are declaring that this is an obligatory mitzvah so if you decide that you cannot perform the mitzvah of aliyah, a special dispensation is required just like every other mitzvah. And this dispensation is only temporary and if you can’t perform it, you have to figure out how to enable your children to perform this requirement.”

Unfortunately, there is a precedent for Jews being reluctant to answer the call to return from exile. According to Jewish tradition, only twenty percent of the Jews left Egypt and even fewer returned from the Babylonian Exile.