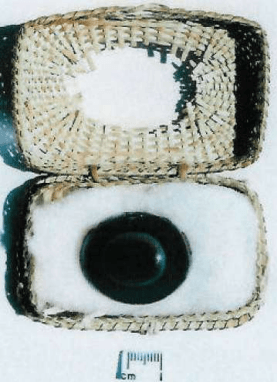 The Breastplate from Solomon’s Temple

The story begins in 1189 when Croiz Arneet deTarn Auret left France to fight in the Crusades. Auret arrived in Jerusalem and, according to Auret family tradition, received a very special stone from “the High Priest” in gratitude for his part in freeing Jerusalem. The stone was allegedly taken from the חושן המשפט(Choshen HaMishpat, the High Priest’s breastplate).

You shall make a breastpiece of decision, worked into a design; make it in the style of the ephod: make it of gold, of blue, purple, and crimson yarns, and of fine twisted linen. Exodus 28:15

And thou shalt put the two stones upon the shoulder-pieces of the ephod, to be stones of memorial for the children of Israel; and Aharon shall bear their names before Hashem upon his two shoulders for a memorial. Exodus 28:12

The custodianship of the stone was passed on in the Auret family through the male line until the nineteenth century. That tradition was broken when Abraham Auret passed away in 1889, bequeathing the stone to his daughter, Christina Elizabeth.

After her marriage to William James Hurst, the stone left the Auret name, and has been passed on from mother to daughter ever since. Meticulously recorded family trees and genealogical reports corroborate the story. The stone was passed on as an inheritance and is presently owned by an elderly woman in South Africa, who wished to remain anonymous.

Verifying the Truth of the Stone

Approximately 25 years ago, she considered selling the stone. Towards that end, she needed to have experts verify the claim. She consigned the sale to an agent. Most of the relevant experts were in Israel and being unfamiliar with the country, the agent entrusted with selling the stone contacted Gary Fox, a devout Christian who had several years in Israel, to act as a liaison. Fox recently contacted Breaking Israel News to relate his experiences with the remarkable stone.

“I went to Johannesburg and taken into a bank vault,” Fox told Breaking Israel news,  describing the presence of armed guards stationed inside the vault for the viewing. “They did know how much it was worth but they were quite nervous about protecting it. It was very cloak and dagger. The family was very nervous.”

The Miracle of the Kohen’s Breastplate: Light

At first, Fox thought the story was too fantastic to be true but he was fascinated by its appearance. He asked to touch the stone and the family reluctantly agreed.

“I was skeptical,” Fox said. “But the moment I picked it up, I knew at that moment that I had something in my hands something that was supernatural.”

“As I touched it, it lit up,” Fox said. “I actually got a fright and jumped. One of the family members giggled and said, ‘Yes, the stone speaks.”

And when Shaul inquired of Hashem, Hashem answered him not, neither by dreams, nor by Urim, nor by prophets. I Samuel 28:6

In the course of investigating this article, this reporter spoke to several of the people involved in proving the stone’s provenance. Fox’s experience was not unique. Several witnesses described the phenomenon of the stone lighting up as if from some inner source, though one witness described the stone turning dark. This seemed to be a highly personal experience.

“In my mind, I was thinking, ‘thank the lord it turned light’,” Fox said. “From a Christian point of view, I knew that the Lord had brought me into this for a purpose so I decided I would do whatever I needed to do. This stone traveled from Jerusalem, the City of God, through Europe, to finally end up in ‘the City of Gold; Johannesburg. This was the apt place to keep this gem, this incredible God thing, hidden until the time was right for it to be revealed.”

It should be noted that Johannesburg is indeed referred to as the City of Gold due to the enormous gold deposits in the region. But the largest city in South Africa is intrinsically related to Jerusalem which was also dubbed ‘the City of Gold” in a famous Naomi Shemer song composed in 1967. Three weeks after the song was written, IDF troops entered Jerusalem, singing the song, unifying the city that was the heart of the Jewish people.

The owner of the stone asked Fox to travel to Israel in order to convince Dr. Joan Goodnick Westenholz, Chief Curator at the Bible Lands Museum in Jerusalem, to come to South Africa to examine the stone. Not only did the Bible Lands Museum host an impressive display of archaeological artifacts, many from the Biblical period, but it also contained the largest exhibit of ancient jewelry in the world.

While discussing the stone, Dr. Westenholz mentioned the tradition of the urim v’tummim and Fox interjected, “This stone speaks.” Dr. Westenholz was visibly intrigued by his statement.

Fox succeeded in convincing Dr. Westenholz to travel to South Africa where she insisted on taking the stone to a laboratory for a full evaluation. Despite not being a religiously observant Jew, Dr. Westenholz was so impressed by seeing the sardonyx that she was concerned about transferring ritual impurity to the stone. She refused to touch it without gloves. In her notarized report, she observed what appeared to be two engravings under the surface of the stone, one of which she identified as a bet’.

“What was remarkable was that the engravings were under the surface and followed the curvature of the stone,” Fox said, “They were geologically formed, appearing under the microscope like little bubbles formed into a perfect shape as the stone itself was formed.”

This was the point at which his artistic abilities came into play. Fox sketched the stone, including outlines of the two engravings.

“They had no idea what the second engraving was,” Fox said. “After seeing my sketches, she suddenly realized that it was a wolf. She noted that the wolf corresponded to the blessing Jacob gave Benjamin.

Binyamin is a wolf that raveneth; in the morning he devoureth the prey, and at even he divideth the spoil. Genesis 49:27

After inspecting the stone under a microscope, Dr. Westnholtz determined that the tools used and the polish indicated the stone had been manufactured in the Middle East during the time the Children of Israel left Egypt.

The owner of the stone was thrilled with the assessment but the process of verifying the stone continued for several more years. Though it is impossible to definitively determine the age of the stone, Dr. James Strange, a noted professor in religious studies and archaeology, who inspected the sardonyx in 2000 was perplexed at what he saw.

“I was unaware that anyone in the late Middle Ages had the technology to cut a hemisphere in such a medium, so I tried to exhaust all other explanations,” he told Breaking Israel News in an interview in 2016.

Even more astounding than the cut of the stone was the inexplicable inscription inside the stone, visible through the clear surface: two letters in ancient Hebrew. Dr. Stone wrote in his appraisal of the gem, “There is no modern or ancient technology known to me by which an artisan could produce the inscription, as it is not cut into the surface of the stone.”

It is interesting to note that according to Jewish tradition, the stones of the breastplate were engraved by the shamir, a worm capable of cutting the hardest rock with absolute precision. The shamir was reputed to have existed in the time of Moses, as one of the ten wonders created on the eve of the first Sabbath, just before God finished creation.

Dr. Stone consulted with Ian Campbell, Director of the Independent Coloured Stones Laboratory in Johannesburg and a leading South African gemologist. Mr. Campbell, photomicrographed (photographing via a microscope) the stone, confirming it had not been cut open to make the inscription.

Professor M. Sharon from the University of Witwatersrand and an expert in ancient Hebrew, inspected the stones and noted the inscriptions in ancient Hebrew script of what he described as “the equivalent of our ‘B’ and ‘K’.” He identified the style of script, dating it to be from the year 1000 BCE, give or take 200-300 years.

“Due to the clarity of the letters and their fine definition it would be incredible if they are a coincidental natural formation in the stone,” he stated in his notarized report. “The lack of any apparent sign of interference with the surface makes the existence of the letters inside the stone a real enigma.”

Dr. Westenholz and Ian Campbell have since passed away, but Breaking Israel News was able to confirm that their statements and documentation were genuine. Campbell’s apprentice, Jeremy Rothon, confirmed the original appraisal and told Breaking Israel News that he was well aware of the stone’s heritage. It had made an enormous impression on Campbell and he had discussed it at length with his student.

The family’s initial nervousness proved to be justified. The stone was eventually verified by several experts who appraised its value at approximately $200 million.

AUTHOR’S NOTE: I would like to thank Gary Fox, founder and president at New Life Movement and Gary Fox Ministries, for reaching out to me with his amazing account that reaffirms for me the ongoing story of the return to Israel and the miraculous times we live in.