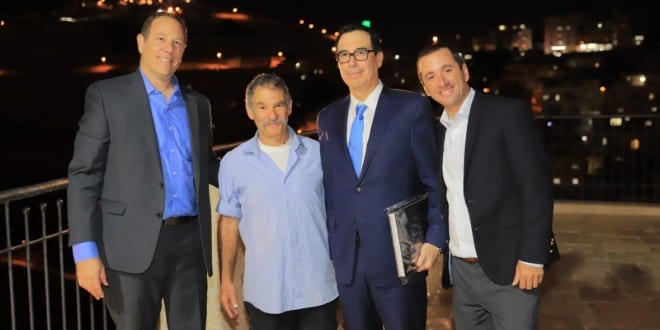 City of David, Jerusalem (31/10/2019) Earlier this week, United States Secretary of the Treasury Steven Mnuchin visited the City of David – Ancient Jerusalem. The Secretary was outwardly impressed, as he walked through the site of King David’s ancient city, including the recently uncovered first- century Pilgrimage Road which acted as a main thoroughfare for Pilgrims ascending from the Pool of Siloam to the Temple on Mount Moriah. Secretary Mnuchin was accompanied by Ambassador David Friedman, City of David Foundation Founder and Israel Prize Laureate David (Davidle) Be’eri, City of David Foundation Vice-President Doron Spielman and City of David Director of International Affairs Ze’ev Orenstein.

The City of David National Park is the largest active archaeological excavation in Israel and one of the country’s most popular historical landmarks, situated upon the ruins of ancient Jerusalem. It is the place in which King David established Jerusalem as the united capital of Israel 3,000 years ago. Where some of the most compelling personalities and seminal events of the Biblical period unfolded. However, despite the cultural, historical and religious significance to billions, the City of David was almost lost forever. Until a British explorer sent by Queen Victoria accidently stumbled upon a series of underground water channels that would change the course of history forever.

Deep beneath a potato field, outside the five-hundred-year-old city walls, Captain Charles Warren had discovered Jerusalem’s Biblical water source, the Gihon Spring. He would also find archaeological remains that predated those found inside the walls by thousands of years, leading him to opine that the original City of David was just south of what is known until today as the Old City. One-hundred-and-fifty-two years later, tens of international archaeological expeditions have proven him right, with some of the most significant finds of the ancient world, including what is thought to be King David’s Palace and many seals bearing the Hebrew names of Biblical figures from the House of David. https://www.cityofdavid.org.il/en