The Mask is Off: Lebanon is Hezbollah

Home » The Mask is Off: Lebanon is Hezbollah 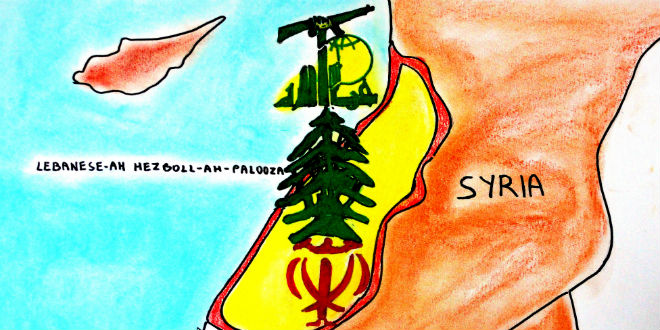 I have some news: There has been no state of Lebanon for some time now. The entity to the north of Israel is nothing but a mask covering up the bitter reality: Lebanon belongs to Hezbollah. It is ruled by Hezbollah leader Hassan Nasrallah, whose agenda is dictated by Tehran. Hezbollah’s army is stronger than the official Lebanese army, and the country’s economy is designed to serve Nasrallah’s goals.

The Lebanese parliament, government, president and all other state institutions are nothing more than a facade for players directed by Nasrallah, who also decides what they will be paid for “good behavior,” and whether his collaborators can benefit from the corruption that is running rampant in Lebanon.

The public is well aware of the situation, and is furious about it. Two weeks ago, people took to the streets in Lebanon to protest against “corruption” and demand that the government resign. The unifying slogan has been “everyone—as in, everyone,” meaning get rid of all the ministers because they are all corrupt, including the ministers that work for Hezbollah.

Nasrallah and his Iranian sponsors are afraid that the mask will slip, exposing the country’s true face—that of Hezbollah—to the world. If that happens, the world will stop selling weapons to the Lebanese army (“we have to strengthen the Lebanese army for the challenges facing it,” say French weapons manufacturers and others) and stop lending the country money that just goes to support the thieving regime Hezbollah has put in place.

In a speech last Friday that lasted over an hour, Nasrallah warned the citizens of Lebanon against anarchy, warning that if the protests got out of control, they would meet “active intervention” (meaning, forcible dispersal) from members of the “resistance” (Hezbollah).

On Tuesday, Lebanese Prime Minister Saad Hariri resigned, along with the rest of the government, including Hezbollah ministers—meaning the demonstrators’ first demand has been met. Their second demand is to appoint a government of non-party-affiliated experts to run the country.

It appears that Nasrallah won’t object to the idea, if only to keep the mask on. He will, however, make sure that the “experts” will do what he tells them to. That way he can play for time—but the public could take to the streets again if they realize they were fooled.

Hariri’s resignation and the fall of the Lebanese government is the first crack in the mask, and Nasrallah will now hunker down and start working assiduously to breathe life into state institutions so that they resume functioning and keep supplying him with cover as in the past. He doesn’t have an easy task ahead of him, because the protesters are as sick of Nasrallah as they are of his corrupt lackeys.

The sense of togetherness that has blossomed in the nation’s squares, the “festival” that has gone on for two weeks already, the major role the women of Lebanon are playing in the protests, the national flags with their stylized cedar trees and the slogans being shouted are all signs that the genie is out of the bottle, and at this stage is refusing to go back in.

If, heaven forbid, a few dozen of the protesters were killed, that might be the final nail in the coffin. Or it might not. Nasrallah is sweating bullets, that’s for sure.