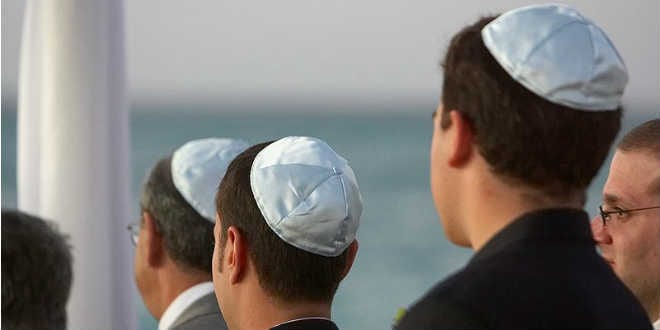 With impeccable timing, a new American Jewish Committee survey came out only days before the one-year anniversary of the Pittsburgh synagogue shooting. The memorials for the single bloodiest day in American Jewish history echoed with renewed outrage about that crime and the subsequent shooting at Chabad of Poway in Southern California. So it was hardly surprising that the poll’s findings were hyped in some quarters as an indication that fear of anti-Semitic violence was rising along with the statistics on hate crimes.

The fact that 88 percent of those polled thought anti-Semitism was a problem and 84 percent thought it was increasing stopped some observers in their tracks. Even more startling was the fact that 31 percent of the respondents answered that they “avoided publicly wearing, carrying or displaying things that might help people identify you as a Jew.”

Taken on its own, that result makes the United States sound as if it is not merely heading down the path to the same dangerous conditions for Jews as France, Germany and other European countries where even public officials have cautioned Jews not to stand out lest they be singled out for violence.

That number, combined with other findings in the survey, in which the majority of Jews blamed Republicans far more than Democrats for anti-Semitism, and regard President Donald Trump’s record on anti-Semitism unfavorably, has helped some on the left make the case that not only are Jews afraid, but that it’s clear the reason for their fear stems from concerns about the White House.

While this survey should be taken seriously, there are some points about it that need to be put in context.

The first is that while the number of those who indicate that they are afraid to be identified as Jews is alarmingly high, it’s not entirely apparent whether that kind of fear is justified.

After all, the same survey made it clear how rare open acts of anti-Semitism truly are.

Only 2 percent of those polled said they had ever experienced an anti-Semitic attack in the last five years. While even one such crime is one too many, given that the language of the question is so broad, it’s far from certain that even the figure of 2 percent represents a real anti-Semitic threat to life and limb in 2019. Indeed, outside of the targeting of ultra-Orthodox Jews in Brooklyn, N.Y., who are easy to single out and the rare shootings, attacks on Jews remain truly unusual in the United States.

Even when asked whether they had been the targets of an anti-Semitic remark, only 23 percent said yes.  Interestingly, the number of those who had experienced such an attack on social media—where extremists are the noisiest and where trolls abound—was only 21 percent. Again, the fact that so many Jews have been subjected to such remarks is terrible, but it remains the fact that more than three-quarters of the Jewish people have never undergone that trial.

Even when the questions switched to life on college campuses, which other surveys have identified as the venue where most Jews have had their primary encounter with anti-Semitism because of attacks on supporters of Israel, the numbers are relatively low. Only 20 percent of those polled said they either personally experienced anti-Semitism in an institution of higher learning or knew someone who had.

Despite all our worries, the survey proves that the overwhelming majority of American Jews can live entire lifetimes without once having to navigate through a situation in which their Jewish identity makes them a target.

Should that cause us to downplay the issue of anti-Semitism? Absolutely not.

The existence of a tiny group of white supremacists who are armed and dangerous, coupled with the growth of anti-Semitism masquerading as mere criticism of Israel is worrisome. Anti-Semitism is a powerful virus that has attached itself to a number of different ideologies, including fascism, Nazism, communism and radical Islam. Even in the country that has proved to be the best home for Jews in the history of the Diaspora, hatred of Jews is never going to completely disappear.

But we should also be aware of the role partisanship plays in shaping our views of anti-Semitism.

When asked which party bears more responsibility for “the current level of anti-Semitism,” on a scale of 1 to 10, most Jews blame Republicans more (54 percent) and Trump far more than Democrats (at 18 percent).

That response correlates with the fact that Jews break down on partisan and ideological lines that are similar to those results with Democrats outnumbering Republicans by 53 percent to 14 percent, and liberals dominating conservatives by 56 percent to 21 percent. Where Trump is concerned, the numbers conform to the usual breakdown of the Jewish vote in presidential elections, with 76 percent viewing him unfavorably and only 22 percent favorably.

In an era of hyper-partisanship in which adherents of the two major parties exist in social-media silos where they rarely experience opposing opinions, it’s only natural that Republicans blame Democrats and Democrats blame Republicans for anti-Semitism, with neither group particularly interested in taking on political allies for their role in spreading Jew-hatred. It’s no surprise that anger about the president has helped increase the total of those expressing fear, even if they may not personally be in danger.

Yet we should also be encouraged that so many Jews are willing to call out extremists on both ends of the spectrum. While 89 percent view the “extreme political right” as a threat, 64 percent also view the “extreme political left” as a similar peril. That number upset some Israel-bashers like The Forward’s Peter Beinart, who act as apologists for the anti-Semitic BDS crowd and want that variant of Jew-hatred shifted from the definition.

The main conclusions we should be drawing from the AJC survey is that for all of our justified fears, it’s a mistake to think that American anti-Semitism is no different from the far more serious problems facing European Jews. Nor should we allow our political leanings to obscure the truth that threats to Jews exist from both ends of the political spectrum.

Seen in context, the alarming results don’t change the fact that—thanks to American exceptionalism—Jews should still have no qualms about claiming a place in any sector of society. That’s still true even if radicals on the right and the left both want to marginalize those who are unafraid to proudly proclaim their Jewish identity.