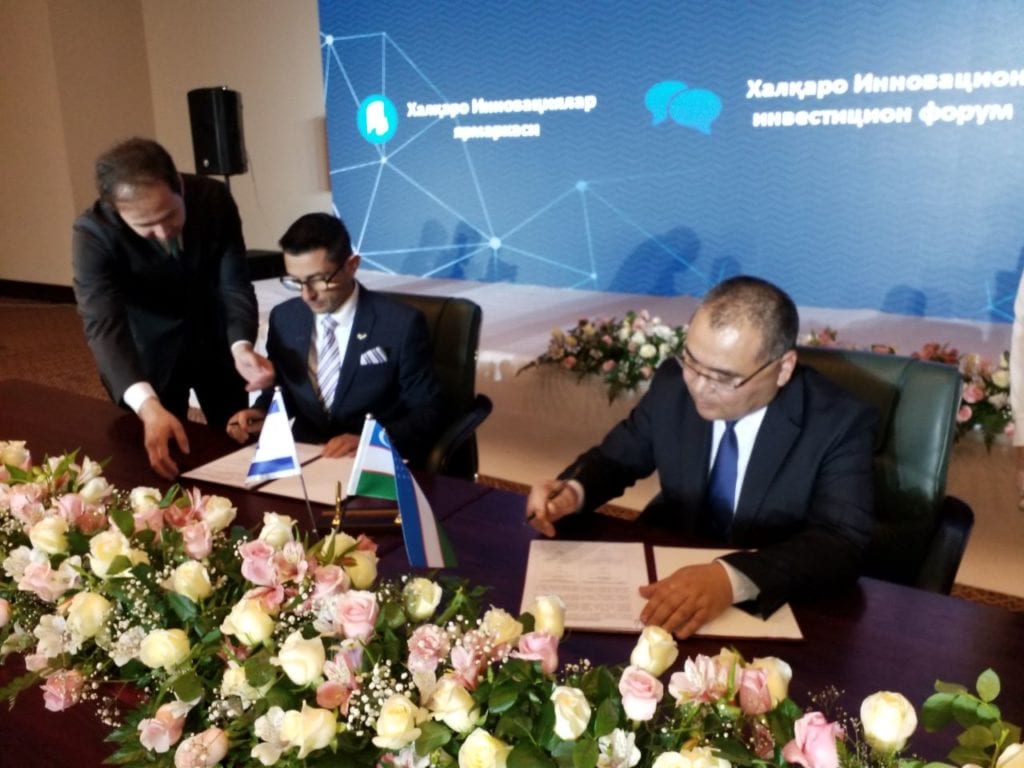 The government of Uzbekistan signed a memorandum of understanding on Tuesday with the Israel-based company, Watergen in an effort aimed at harnessing and using the company’s patented technology to make pure, clean-drinking water out of ambient air. The agreement was signed on Tuesday by Uzbekistan’s Minister of Innovation, Mr. Ibrohim Abdurakhmonov and Watergen’s Vice-President of marketing and sales, Mr. Michael Rutman.

According to the MOU, thousands of GEN-M atmospheric water generators (AWGs) produced by Watergen will be dispatched to different towns and cities in the country facing major water shortages including in Bukhara and Samarkand. With a weight of just 780 kilograms, the GEN-M is easily transportable and can make as much as 800 liters of water per day. Each unit contains an internal water treatment system and needs no infrastructure except a source of electricity in order to operate.

Uzbekistan has been in desperate need for a secure water supply, especially since it is just one of two countries in the entire world that is “double landlocked” from the oceanic seas. As a result, Uzbekistan has relied on the Amu Darya and Syr Darya  rivers for a fresh water supply. However, in recent years, Kyrgyzstan and Tajikistan have insisted on making hydro-power dams at the headwaters for both rivers, undermining Uzbekistan’s ability to use both rivers as sources for freshwater. Such concerns may very well become completely moot with the help of Watergen’s technology.

The patented, heat-exchange GENius technology contained in each of WatergenAWGs creates water by cooling collected air at its dew point. Subsequently, the water goes through physical, chemical and biological treatment followed by a mineralization process to maintain its cleanliness, tastiness and healthy quality.

The technology, in the form of the GEN-M, also made a splash during Uzbekistan’s Innoweek 2019 exhibition this week at the Uzexpocentre National Exhibition Complex in the capital of Tashkent. The annual exhibition, which is attended by representatives from the UN and dozens of countries, features new forms of technology that can help increase the living standards and economic conditions in Uzbekistan. On that note, Uzbekistan’s Deputy Prime Minister, Mr. Aziz Abdukhakimov said: “In light of Uzbekistan’s water shortage, Uzbekistan desperately needs technology such as that provided by Watergen in order to improve its water sector.”

Watergen’s VP Sales and Marketing, Mr. Michael Rutman who also presented the technology at the exhibition, added: “We are giving the people of Uzbekistan a very safe and simple alternative for dealing with a very difficult problem they are facing. Our technology offers the people of Uzbekistan a method to acquire freshwater on a daily basis. We were pleased to share our technologies with the Deputy Prime Minister of the Republic of Uzbekistan, Mr. Aziz Abdukhakimov, and the Minister of Innovation, Mr. Ibrohim Abdurakhmonov.”

The GEN-M made an incredibly successful pilot last May at an orphanage in Bukhara housing 120 orphans. Watergen’s president and visionary, Dr. Michael Mirilashvili noted at the time: “Uzbekistan’s water utility company was thrilled with our water from air solution and requested to run pilots in several other regions of Uzbekistan. Although there is only 20% humidity in the air of Bukhara, the GEN-M was still able to generate hundreds of liters of high-quality drinking water.”

Founded in 2009, Watergen has devoted its innovative technology towards solving the world’s water crisis under the leadership of its president, Dr. Michael Mirilashvili. Watergen provides a game-changing water-from-air solution based on its proprietary patented GENius technology that uses humidity in the air to create clean and fresh drinking water to people everywhere. The company offers a range of water atmospheric generators (AWG) for various applications; the home-scale GENNY that can produce up to 30 liters of water per day, the medium-scale GEN-M that produces up to 800 liters of water per day and the industrial, GEN-L generators that can make as many as 5,000 liters of water per day. Watergen’s AWGs are installed in several countries around the globe.  For more information, please visit: www.watergen.com