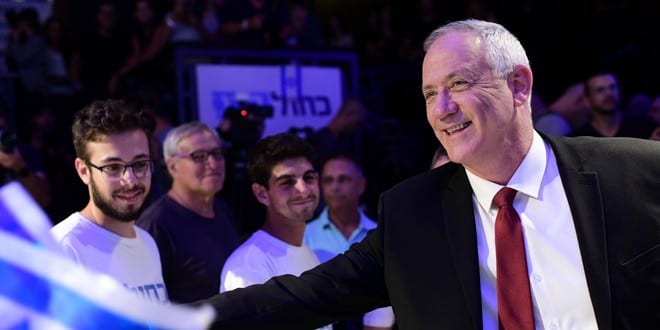 While the world oohed and aahed with the news that Israeli Prime Minister Benjamin Netanyahu was returning his coalition-building mandate to President Reuven Rivlin—who, in turn, would offer it to Blue and White Party chairman Benny Gantz—Israelis reacted with a shrug and a nod. During the weeks since the second round of Knesset elections on Sept. 17, it became increasingly clear that Netanyahu, the head of Likud, would not be able to cobble together a government under the current circumstances.

Netanyahu’s pact with the right-wing/religious parties that they would be part of a “package deal” in any coalition negotiations was unacceptable to Blue and White, which rejected any such “preconditions,” while also asserting that it would not join a national-unity government with a party led by someone under indictment. This is in spite of the fact that Netanyahu has yet to be indicted on any of the flimsy charges for which he has been under investigation.

Be all that as it may, Gantz probably won’t be able to succeed where Netanyahu failed, making a third round of elections likely, if not inevitable. Most Israelis have resigned themselves to such a scenario. Even Hebrew news outlets started relegating items about coalition-building to below-the-fold, inner-page or last-spot-before-the-weather-report exile. Until Monday evening, that is, when Netanyahu effectively placed the ball in Gantz’s court.

One might attribute the preceding lull in Israeli interest to a mixture of disgust and apathy about the inability of the political echelon to settle its differences and get down to the business of governance, which, in Israel’s case, best translates into getting a move on where the allocation of budgets is concerned.

But this isn’t the real reason that the past month has been characterized as some sort of intolerable limbo that Israel can ill afford. No, the truth about the country’s lack of functioning over the past few weeks is rooted not in the electoral impasse, but rather in the Jewish holidays. Indeed, every year in September and part of October, the government basically shuts down for Rosh Hashanah, Yom Kippur and the entire week of Sukkot, ending with Simchat Torah.

It’s a time when hundreds of thousands of Israelis take flight across the globe, and when kids who barely began the school year after two months of summer vacation are back out for another long break.

It is also when government offices, including the National Insurance Institute, the Interior Ministry, the Immigrant Absorption Ministry, the Motor Vehicles Bureau, the Employment Service and the Income Tax Authority, are closed. And when the electric, water and postal companies, as well as the courts, banks and health funds, work with skeletal staffs and are open for fewer hours than usual.

With little else to do but prepare endless family meals, those Israelis who do not go abroad spend their days counting down to the blessed period familiarly known as “after the holidays.”

The sad fact is that even if the next government had been up and running weeks ago, it would have been virtually AWOL before it had a chance to show its new face to the public that it was elected to represent and serve.

It is thus that Israelis yawned at the prospect of Gantz now having a hand at preventing a third round of elections, which he has a snowball’s chance in hell of pulling off in any case. We’re trying to muster up the energy to resume daily life where it left off “before the holidays.”