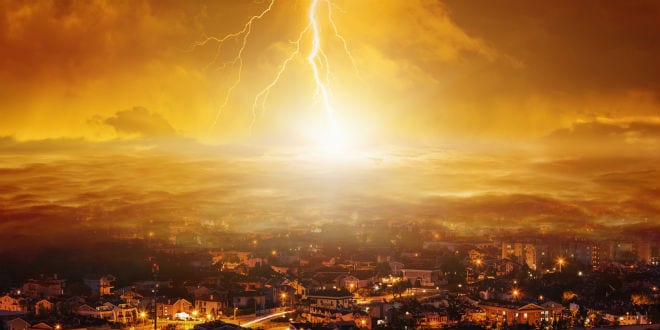 The holiday of Sukkoth was marked by dramatic storms; high winds accompanied by thunder and lightning but very little rain. One prominent rabbi, spiritual leader to thousands of devout Jews, noted simply that the storm, coming as it did at the beginning of the holiday, marked God’s entrance into the Gog and Magog field of combat.

An article in Rotter.net,  a Hebrew language news site, noted that weather predictions, normally complex and unpredictable during the transition from Israel’s arid summer into its stormy winter, were particularly difficult this year. Despite storm systems in the region dumping rain all around Israel, the Holy Land remained mostly dry, a mixed blessing that spared pilgrims and booth-dwellers at the expense of hard-pressed farmers.

A follow-up article noted the possibility of a ‘medicane,’ the semi-rare result of a hurricane system developing over the Mediterranean, that is expected to hit southern Israel as the Sabbath begins on Friday afternoon. Difficult to detect because of the arid conditions, medicanes can produce winds of 40-110 mph. The main danger is from flooding in flash-flood areas.

While all of Israel sat in Sukkoth last week, the heavens glimpsed through the leafy roof, the weather became a much more serious element, an intimate and personal experience of nature. Many Sukkoth, temporary dwellings symbolizing man’s temporal existence, were destroyed, knocked over by powerful winds.

Nine days ago, during the first evening of the intermediary days of the holiday, Rabbi Yosef Berger, the rabbi of King David’s Tomb on Mount Zion, was enjoying the holiday meal in his father’s sukkah when a thunderstorm shook the fragile structure. After a few moments of meditation, his father said, “This is the beginning of Gog and Magog.”

It should be noted that Rabbi Yosef Berger’s father is Rabbi Shalom Berger, the revered spiritual leader of thousands of Hassidic Jews belinging to the Mishkoltz sect of Judaism. Rabbi Shalom reminded his son that the War of Gog and Magog will include the forces of nature as well as soldiers of flesh and blood. Rabbi Berger pointed out that according to Jewish tradition, the War of Gog and Magog will begin during the holiday of Sukkoth.

“The war will begin on Sukkoth so all the nations that take part in Gog and Magog will come to Jerusalem for the holiday to celebrate surviving the war,” Rabbi Berger said, citing Zechariah.

All who survive of all those nations that came up against Yerushalayim shall make a pilgrimage year by year to bow low to the King lord of Hosts and to observe the festival of Sukkot. Zechariah 14:16

It is, for this central role the holiday plays in that conflict that the sections of Ezekiel and Zechariah describing Gog and Magog are both read in the synagogue during the holiday.

“Ezekiel describes a simple war of man-versus-man,” Rabbi Berger explained. “But it would be incorrect to envision Gog and Magog as a war. Zechariah describes a conflict in which nature plays an active role. Earthquakes wrack the land, the sun and the moon change, water flows in different manners, and disease will play a major role. God will take an active role in the war and thunder and lightning will announce His presence.”

Hashem is king! Let the earth exult, the many islands rejoice! Dense clouds are around Him, righteousness and justice are the base of His throne. Fire is His vanguard, burning His foes on every side.His lightnings light up the world; the earth is convulsed at the sight; Psalms 97:1-4

This clearly seemed to be the case on the second evening of Sukkot (Feast of Tabernacles), thunder and lightning storms hit Israel on Monday night when a bolt of lightning hit the minaret tower of the Al-Aksa Mosque on the Temple Mount.

“That is also part of the picture,” Rabbi Berger said. “The War of Gog and Magog begins outside of Israel but its focus is on Jerusalem.”