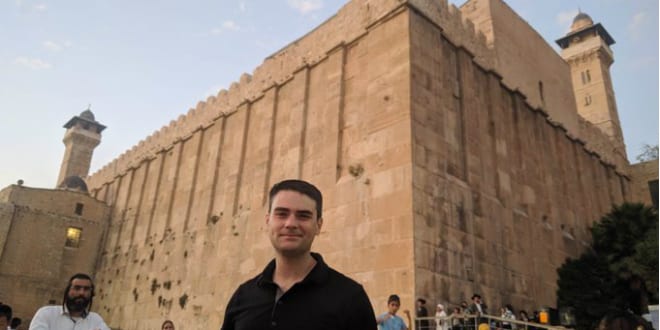 Conservative political pundit, Ben Shapiro, visited Hebron on Wednesday as part of his tour of Israel during the week-long holiday of Sukkoth.

Went to Hebron yesterday and visited the Cave of the Patriarchs, Ma’arat Hamachpeila – the first plot of land purchased by Abraham in Israel and the gravesite of Abraham and Sarah, Isaac and Rebecca, Jacob and Leah. pic.twitter.com/JJh3ZHm1yM

Shapiro, an Orthodox Jew, noted the benefits of Israeli rule in the city, which was conquered in the 1967 Six-Day War.

It was closed to Jews for 700 years under Muslim rule. Since 1967 it is open to everyone. Thank God for Israel.

Shapiro discussed his visit to the ancient city on his podcast which was broadcast from Israel.

While Jewish visitors are given access to only a small portion of the tomb complex most of the year, during the two-day festival the Isaac and Rebecca Halls are opened to Jewish prayer services.

Shapiro, editor-in-chief for The Daily Wire, which he founded, and host of the daily  The Ben Shapiro Show,  is one of the most popular and influential right-wing/conservative commentators today. He is vocal about his decision not to vote for either candidate in the last presidential election but has revised his position and praises President Trump for policies that Shapiro deems productive. He also criticizes the president when he believes he sees Trump’s actions as detrimental. A resident of Los Angeles, Shapiro graduated from Harvard Law School Cum Laude. A popular speaker on campuses, his events are frequently targeted by left-wing mob tactics.

His wife,  Mor Toledano, is a physician. Raised in Israel, Mor is descended from Moroccan Jews.

Shapiro supported Jews living in Judea and Samaria and is a longtime opponent of the two-state solution which would create a Palestinian state in the land that was illegally occupied by Jordan until being liberated by Israel in 1967.