Christians Beautifying Jerusalem for Sukkoth as a Reconciliation with Judah: Ani Yosef

Home » Christians Beautifying Jerusalem for Sukkoth as a Reconciliation with Judah: Ani Yosef 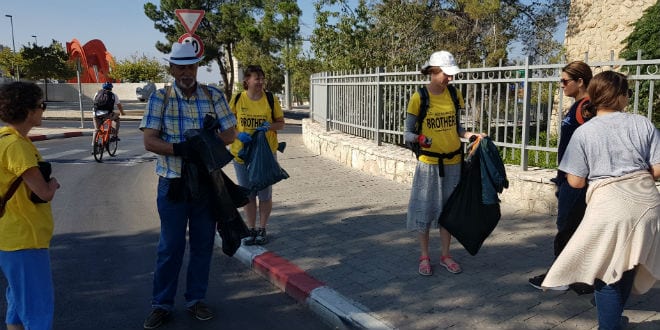 Tens of thousands of Christian pilgrims fill Jerusalem during the holiday of Sukkoth but one group comes from around the world comes to show their love for the holy city and the nation of Israel in the humblest manner; by picking up garbage.

The project is organized by Pete Rambo, co-founder of Ani Yosef, a faith organization that reconciles the relationship of believers in Jesus with Israel through service, love, and friendship. As its name implies, the idea comes from the Biblical reunion of Joseph with his brothers in Egypt.

“When they met in Egypt, Jacob’s sons did bot recognize their younger brother,” Rambo explained. “Joseph looked like a foreigner to them. In a similar manner, Jews and Christians may see each other as foreign when, in fact, Christianity began in Israel as part of the Jewish people. We are fixing this by putting a servant’s face on Ephraim.”

A former pastor, Rambo self-defines as an Efarimite, or Bnei Efraim. Efraimite identity is rooted in the prophecies of 1 Kings, concerning ten lost tribes who will forget their original language, culture, history and religion, as well as Ezekiel 37, concerning the ingathering of the exiles of the kingdoms of Judah and Israel:

“Thus said Hashem: I am going to take the stick of Yosef—which is in the hand of Efraim—and of the tribes of Yisrael associated with him, and I will place the stick of Yehuda upon it and make them into one stick; they shall be joined in My hand.” (Ezekiel 19)

Back in their respective countries, most of the participants share a love for Israel, are Shabbat and festival observant and “eat Biblically clean.” While in Israel, they observe Shabbat together and several other Biblical commandments connected to the holidays.

Rambo noted that for 2,000 years that the Jews were in exile, they were treated as “the other.”

“We need to reframe our attitude as Christians towards the Jews,” Rambo explained. “We need to get rid of any feelings of condescension. Christians need to realize that we are the humble brother coming to Judah in his land.”

Sukkoth was the holiday when people from all nations would come to Jerusalem to take part in the Temple service and the idea of cleaning the city for the benefit of others who are coming to celebrate the feasts came as a natural extension of Rambo’s faith-based love of service.

“Our desire is to reach out to our brothers of Judah by seeking forgiveness through serving by picking up trash and improving the beauty of the Land of our fathers as well as other acts of service that Adonai leads us to do,’ Rambo explained to Breaking Israel News. “We choose to serve at the times of Pesach and Sukkot so that we might also obey the command to go up for the festivals. It is an expression of our love for the land and the people.”

The first program was held last year on Sukkoth when 56 participants came from all over Europe and North America. An additional program took place last Passover. Rambo plans to hold a four-day program biannually on these two Biblical Feasts. Tours and spiritual organized as part of the program.

Participants derive a high-level of feel spiritual fulfillment and, God willing, are blessed in return for blessing Israel. But the only material benefit the participants derive is an insider’s Israel experience few tourists enjoy.

“For $50 per day, our people can perform the Biblical commandment of ascending to Jerusalem for the Feasts,” Rambo said.

During their service and through programs held throughout their visit, participants connect with individual Israelis who are amazed that people come from far away to show their love in such a basic manner. The experience is so uniquely powerful that about one-quarter of the participants this year are planning on taking part in a future Ani Yosef program.

Details about the program can be found on the group’s website.