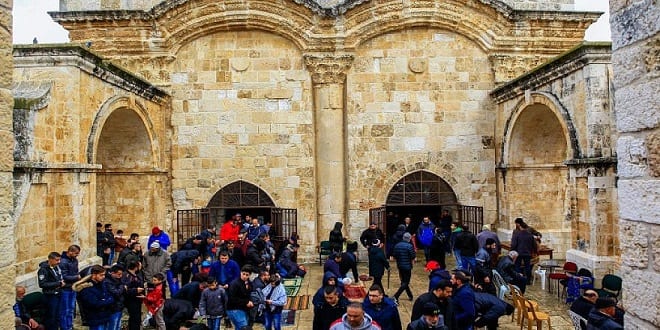 Arab sources reported that during Yom Kippur, the Jerusalem police entered a mosque that was illegally built at the Gate of Mercy on the Temple Mount and confiscated prayer rugs, curtains, and furniture.

The move came following a bombshell expose by right-wing NGO Regavim who revealed to the High Court that the mosque at the Gate of Mercy is still up and running despite the fact that its existence is a violation of the law. This revelation contradicts statements made by the government. In an apparent response to the embarrassment, police confiscated equipment at the scene during Yom Kippur on Wednesday as seen in the video below.

The police entered the compound where the Waqf reportedly holds prayer sessions, Islamic lectures, and other religious activities.

The enforcement sweep was a direct result of Regavim’s update to the Supreme Court that disproved the state’s testimony, delivered in a closed-door hearing only two weeks ago: Despite the government’s claim that the site had been shut down, we proved that the Wakf has continued to operate a mosque at the site, with regular prayers, Islamic study classes, and other religious activities.

In the most recent hearing, representatives of the Prime Minister’s Office and the Israel Police gave closed-door testimony, at which we were not allowed to be present,  regarding the enforcement measures  they are supposedly taking at the Mercy Gate.

Chief Justice Hayut, who presided over the judicial panel that included Justices Menachem Mazuz and Anat Baron, heard the testimony, and stated: “We asked for, and received, an explanation of what is being done. Due to the nature of the case, we cannot allow an open court hearing at which both sides will be present, but what we would like to say, and what we are able to say, is that we have been convinced that concrete steps are being taken through all channels to achieve a reasonable solution to the situation that has evolved at this site. Insofar as the petition was filed in an attempt to spur the respondents to take action, we are convinced that action is being taken.”

But despite these declarations, Regavim filed an updated statement to the High Court of Justice, with extensive documentation, posted on social media over the past several weeks by Islamic activists, that proves that the ancient structure on the Temple Mount has been turned into a fully functioning mosque, including prayer mats, regular prayer services, Islamic instruction, and other religious activity.

Following Regavim’s update to the Supreme Court, police officers carried out enforcement activity at the Mercy Gate compound on Yom Kippur, and removed the prayer mats, room dividers, curtains and furniture  – all of which have been there for many weeks.

Yakhin Zik, Director of Operations at Regavim, described this latest development as a “testimony of shame”  for the Israeli government and the Ministry of Internal Security: “”The state testified to the High Court of Justice in ‘secret testimony’ that concrete steps were being taken, but we proved without any trouble that these statements are divorced from reality. Instead of exercising its sovereignty and shutting down the compound altogether, it has capitulated to the Wakf’s violence. Unfortunately, without our petition to the Supreme Court, this place would be completely overrun by the Wakf.”

Below is a video of the Israeli police entering the compound and surveying the scene before removing the items.