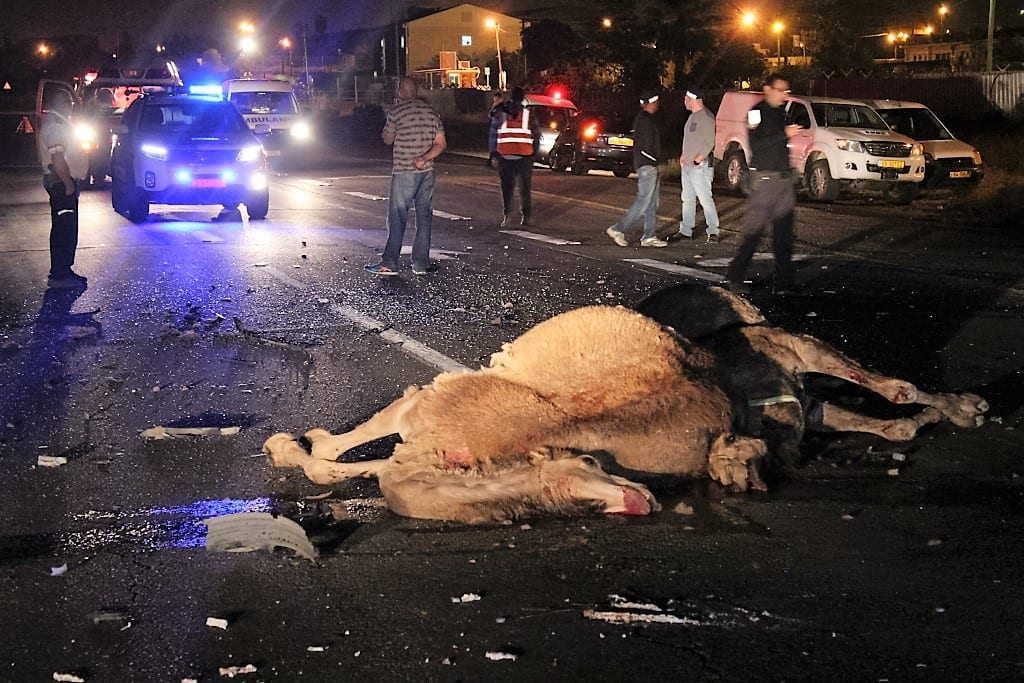 This morning (Sunday), Shaadi Abu Alkiyan of Hura (28) succumbed to wounds resulting from a collision with a wandering camel last week on the main road to his hometown. At the same time as this fatal accident, two other Israelis were wounded in another car crash with a camel near Ovda. Regavim places the blame for these tragedies squarely on the shoulders of the Ministry of Agriculture’s Veterinary Services Division.

The Veterinary Services Division of Israel’s Ministry of Agriculture has failed to enforce the “Camel Law,” which requires registration of ownership of all camels in the Negev, and identification of each camel with a subcutaneous electronic chip. These regulations were formulated in order to prevent camel owners from allowing their animals to roam freely, and to create legal responsibility for any damages caused by unrestrained or improperly attended camels.

Legislation of the “Camel Law” began after David Cohen of Retamim was killed in a collision with a camel in December 2014. In reaction to the accident, Regavim and the bereaved residents of Retamim, who were joined by MKs Betzalel Smotrich and Eitan Cabel, spearheaded efforts to combat the scourge of roaming camels.

Regavim presented alarming Police Department data at a Knesset hearing on the proposed legislation: Every year, more than 1,000 citizens register complaints about wandering camels on the roads of southern Israel, but time after time, the authorities are unable to identify the owners, levy fines, or impose legal sanctions that would deter owners from further reckless negligence that continues to take its toll.

The Camel Law passed its final readings in the Knesset in June 2018, at which time the Veterinary Services Division was given six months to put in place the necessary mechanisms to enforce the law before it became fully activated, in February 2019. Although the Minister of Agriculture, Uri Ariel, was a proponent of the law, the Veterinary Service Division objected to the legislative process from the outset, and rejected the electronic-chip identification system.

“Once again, this is a senseless and unnecessary loss of life. The writing was on the wall – and written in blood on the roads,” says Amichai Yogev, Regavim’s Field Coordinator for the Southern Region. “We have lodged complaints against this particular herd more than once. Although the Ministry of Agriculture’s Pitzuach Unit and the Green Police are extremely motivated and poised for action, without the electronic identification tags, no enforcement activity will be able to achieve its stated goals. Abu Alkiyan’s death is the responsibility of the Veterinary Services Division, the most recent in the long list of victims in the past number of years. Regavim will continue to fight this failure in order to prevent the next fatality. We must not allow this carnage to continue.”